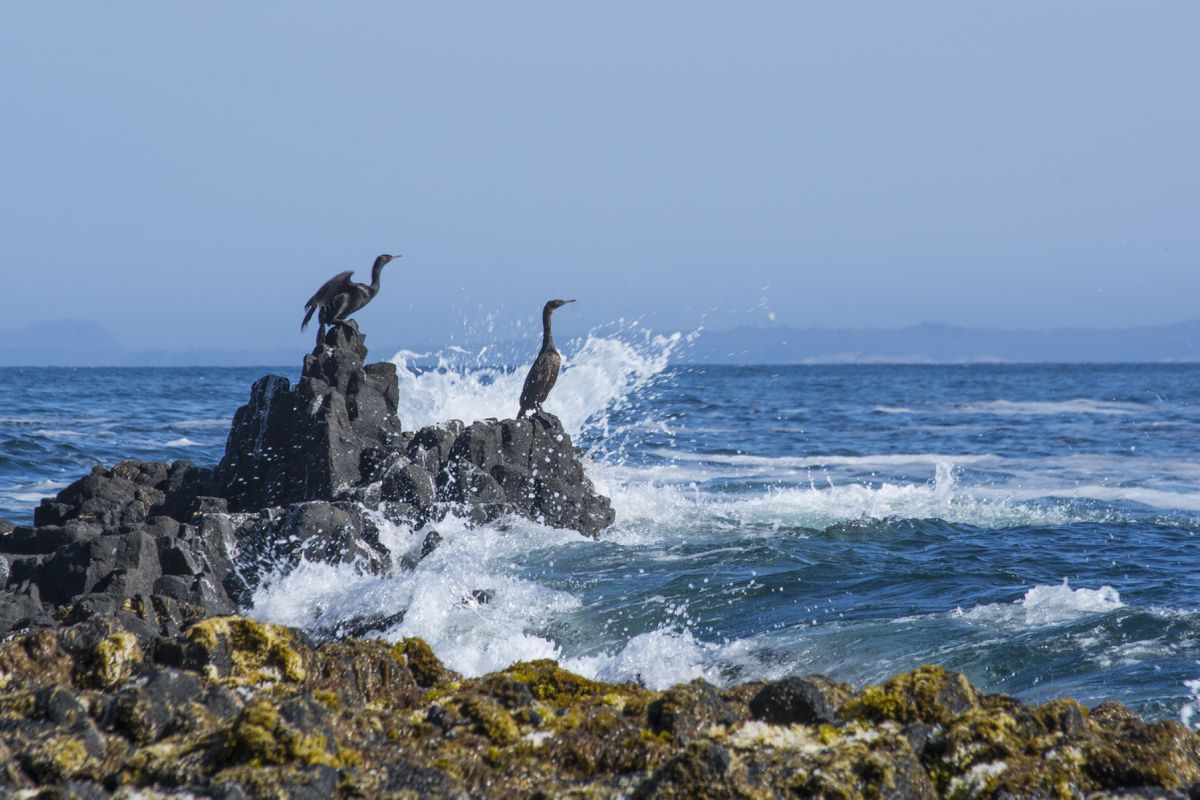 Pelagic cormorants nest in colonies on cliff ledges along Saint Lazaria’s rocky shorelines. They dive under the water’s surface to feed on small fish and crustaceans. (Lione Clare)

Pelagic cormorants nest in colonies on cliff ledges along Saint Lazaria’s rocky shorelines. They dive under the water’s surface to feed on small fish and crustaceans. (Lione Clare)

SITKA — Saint Lazaria is a rocky 65-acre island adjacent to Mount Edgecumbe, about 15 miles west of Sitka. No people live there, but the wilderness wonderland is home to hundreds of thousands of nesting seabirds.

"It has a perfect storm of conditions that attracts many different types of birds," said Leslie Slater, a U.S. Fish and Wildlife Service biologist who's worked on the island 23 years. "It's far enough offshore and too small to support populations of predators."

The sanctuary is one of nine sites studied intensively by the Alaska Maritime National Wildlife Refuge, which is made up of some 2,500 islands, rocks and reefs.

Nine of the 11 species of seabirds on Saint Lazaria are studied, along with black oystercatchers, a shorebird.

Murres colonize a western cliff and researchers use spotting scopes to see when the bird's bright-blue eggs are laid. They track the murres' breeding efforts throughout the season while also monitoring such predators as eagles, crows, falcons, gulls and ravens.

Two species of storm petrels, Leach's and fork-tailed, are the most populous birds on Saint Lazaria. They burrow into the loose soil to lay their eggs and raise their chicks.

Researchers use orange flags to mark where they have made excavations that connect to the interior of the nest. A pink flag marks where the adult birds enter and leave.

Such excavations allow researchers to get into the burrows to measure chicks without disturbing the entrance.

Storm petrels have an exceptional sense of smell, unlike most birds, that allows them to find their nests during the night and avoid predators.

Like storm petrels, rhinoceros auklets also burrow in the ground but their nests may have several chambers more than a foot below the surface. Multiple excavations must be dug to reach the chicks, which are also measured by researchers.

Excavations are carefully reconstructed and disguised in an effort to keep crows out. Diet samples are occasionally collected from rhinoceros auklets at night as they return to their burrows with food. Studying what the birds eat is important because their choices indicate prey availability near the colony and potential changes in the food web.

Several surveys of the island are conducted each season to monitor the pigeon guillemot population. Researchers circle the island in inflatable zodiacs, keeping a close eye out for bright-orange feet.

Glaucous-winged gulls have a colony on the central part of the island. Adults usually lay three eggs in their nest. Once hatched, chicks remain in their parents' territory until they're able to fly. Adult gulls protect their territory and will sometimes hit researchers' heads, so wearing an orange flag usually results in that being hit instead.

Subsistence egging was practiced at Saint Lazaria in the past, and in the early 1900s commercial collecting began for a while. Feathers were collected for the hat-plumage industry, too.

First established as a bird refuge in 1909, Saint Lazaria was protected as wilderness in 1970. These days, the island is a globally important sanctuary for an estimated 430,000 nesting seabirds, including:

*About 4,000 common and thick-billed murres

*Some 1,000 breeding pairs of tufted puffins. Puffin numbers have been declining over the last decade.

Sitka residents and visitors often travel to the island on boats to view its beauty, volcanic topography and spectacular wildlife. However, visitors are strongly encouraged to stay off the island because it's easy to harm the multitude of burrows containing nests and chicks.

"Wherever there's soil, there are birds nesting under it," said Slater, who estimated that birds occupy 95 percent of the island. "That soil, it's really fragile — soft and fluffy enough for the birds to dig into, but not firm enough to support people."

Lione Clare is a freelance writer and photographer based in Sitka.