Commuting through bear country -- alone and on foot 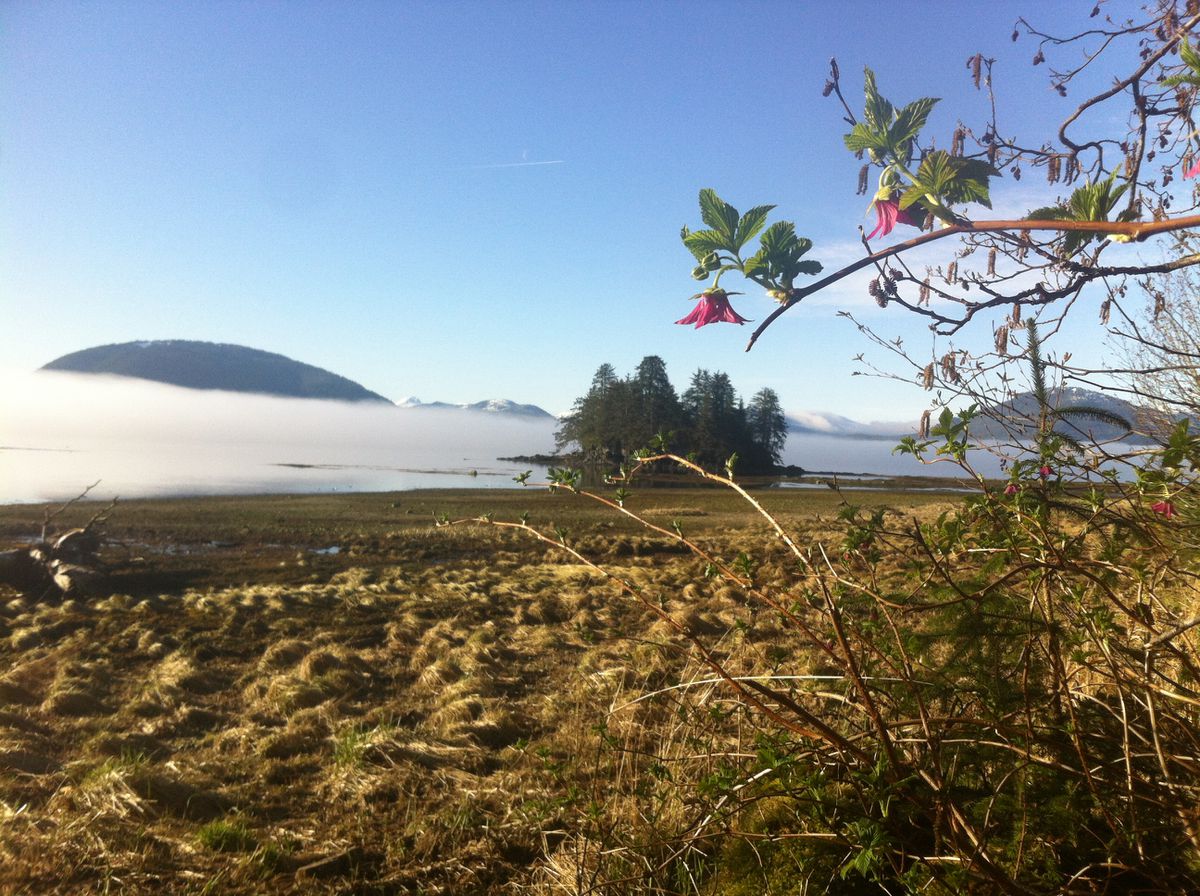 A view of a portion of the author’s 1.5-mile daily commute on foot to her teaching job at the Tenakee Springs School. Tenakee Springs is on Chichagof Island, which boasts the second-most bears per capita in the world — behind only neighboring Admiralty Island. (Megan Bush)

A view of a portion of the author’s 1.5-mile daily commute on foot to her teaching job at the Tenakee Springs School. Tenakee Springs is on Chichagof Island, which boasts the second-most bears per capita in the world — behind only neighboring Admiralty Island. (Megan Bush)

TENAKEE SPRINGS — One morning in May, I woke up to a young bear grazing in the meadow just behind my house. It was early, I had two hours before work, so I stood in my pajamas with a cup of coffee and watched out the kitchen window. His head was buried in the greenery. Wind and sun made his fur ripple like golden wheat. He was so close, with only my rhubarb patch and the trail to town between him and the house, yet from this side of the window I felt safe and insulated. Behind him, the estuary wound lazily toward the ocean.

When I finished getting ready for work, I checked again. He was moving toward the rhubarb. I sighed, pulled out two pots and walked out to the porch in my socks. I started banging. The bear looked up, his ears straight, with that wide-eyed look I assume is surprise. He put his nose up, sniffed twice, then turned away from the noise and buried his head in the bushes. His bottom was not hidden.

"I can still see you!" I hollered.

He didn't move. I watched for a moment. He reminded me of a small child who has not yet mastered the concept of hide and seek. Just because you can't see me doesn't mean I can't see you, I thought. The bear's behind was still near the trail, and the tide was too high to take the beach to work. I went back inside.

"He's as bird-brained as you two," I told the dogs, who were just waking up. The dogs yawned. They had no idea we had company.

When I came back out to the porch, this time ready to walk, with lunch packed and boots on, the bear had gone back to grazing.

"Hey!" I yelled. I banged the pots. "Hey bear!" He looked at me without that look of surprise. Great. I've taught this youngster that banging pots is painless, I thought. I waved my arms. I banged some more. The bear went back to eating.

My commute to work is about 1.5 miles. From my front door to the Tenakee Springs School door takes about 35 minutes on foot. I try to give myself an extra five so I have time to shimmy off my raingear, suction off my boots, and throw on a fresh shirt and mud-free pants. I've had longer commutes and more stressful commutes: icy and snowy drives, up and down steep hills and windy roads. Yet this commute is the one that seems to fascinate people for the danger they perceive, even people who've lived here for years. The reason? I commute through brown bear country, on foot.

Tenakee Springs is on Chichagof Island, second only to Admiralty Island, our neighbor to the east, in bears per capita worldwide. The population estimate is one bear per square mile, or about 2,000 grizzlies.

However, in the past few years bear populations across Southeast Alaska have declined. My fiancé and I saw four bears the whole summer, despite walking to and from town at least three times a week. We rarely saw signs on the trail or near the house. In the fall, I began working at the school, and my hiking commute became five times per week. In winter, the sun rose after I started and set just before I returned, so I hiked with a headlamp. I stopped carrying bear spray in mid-November. What few bears there were, I figured, were fast asleep.

In other places, I hate commuting. I'm always late, always rushing, always balancing my fear of speeding with my hatred of disappointing bosses by being late. A co-worker once mentioned that she loves her commute because she has space and time to decompress. Last winter, for the first time in my life, I understood. My 35-minute hike was my sanctuary, my alone time, my relaxation. It became my favorite part of the day.

With spring and the return of daylight, devil's club buds and nettles sprouted along the trail. Piles of dark, sedge-filled scat and pad-shaped indents bigger than my foot began appearing, too. Signs of bear also splashed across the news. A bear attack outside Haines, another in Yakutat.

Bear attacks unnerve me. Grizzlies are a large predatory animal, with claws, teeth and the ability to rip me to shreds in minutes.

A bear biologist once told me that bears are like humans: Each has its own personality. But there are tendencies: A mother with cubs may be aggressive and a garbage bear is likely desensitized to humans. Brown bears are more likely to be territorial than black bears. Most bears just want to be left alone and will steer clear of people. But not all. Some are curious. Some will charge. You never know for sure.

I try not to let fear burrow into me, but I also recognize that like most worthwhile activities in life, there are risks to hiking alone through bear country. I take precautions: I carry bear spray, I holler, sometimes I carry a bell. I've taught the dogs to run ahead around blind corners so they can flush out anything that hasn't already smelled and heard me coming.

I do not consider myself crazy for hiking through the woods. Driving a car to work seems as dangerous, perhaps more so. Hopefully, I'll never look back on these choices and wish I'd made different ones.

After four years of comparatively little bear activity, the population appears to have grown this spring. Lots of young 2- and 3-year-olds had made it through the precarious first years of life with their mothers and are setting out on their own. There were young bears in the beach grass, rushing across the trail in front of me. There were bears sauntering through town. There were bears in the salmonberries beside our house. A pile of bear scat was piled on my neighbor's porch several consecutive mornings.

I think of young adult brown bears like young adult humans. These youngsters are still testing the waters, learning habits, deciding what kind of adults they'd like to be. Often, instead of running out of sight, they'll move a bit away and then watch me walk by. Disconcertingly close, they're still within easy charging distance.

The bears this spring were both frightening and annoying. It was all anyone in this town of about 100 talked about. One day, two teenagers locked themselves in a shed to escape an especially curious young bear. For a few days a bear hung out in the salmonberries near the harbor and startled people going to and from their boats. Even people who did not live on the outskirts of town began carrying rifles and bear spray.

My commute felt less relaxing than usual, and I began singing at the top of my lungs. Some mornings I'd take the beach in an effort to avoid being surprised by bears, which meant halfway to work I had to strip down to my underpants and ford the thigh-deep Indian River (the only bridge crosses upstream, along the trail). "This commute is ridiculous," I thought one morning as I put my pants back on. I'd lost one of my sandals wading through the rushing water, and while racing to retrieve it, I'd slipped, soaking the pants in my hands and the shirt I was wearing. It was colder than 60 degrees and I was half-naked next to a freezing river, trying to coax my panicked husky into following me across. I was going to be late, despite leaving 30 minutes early. I blamed the bears.

Only a few days later, I woke up to find a young bear grazing next to my rhubarb. In urban Alaska, schools announce snow days when it's too dangerous for the buses to transport students. Though it wasn't weather related, I decided this commute also warranted an occasional day off. I was calling in a bear day. I turned on the VHF radio and called my boss's husband, who I knew monitored channel 16.

"There's a bear in my rhubarb patch," I told him. "Can you let the school know I'll be late?"

Megan Bush lives in Tenakee Springs with her partner and two dogs. She is currently finishing her first book, a memoir about her family's experience with schizophrenia.