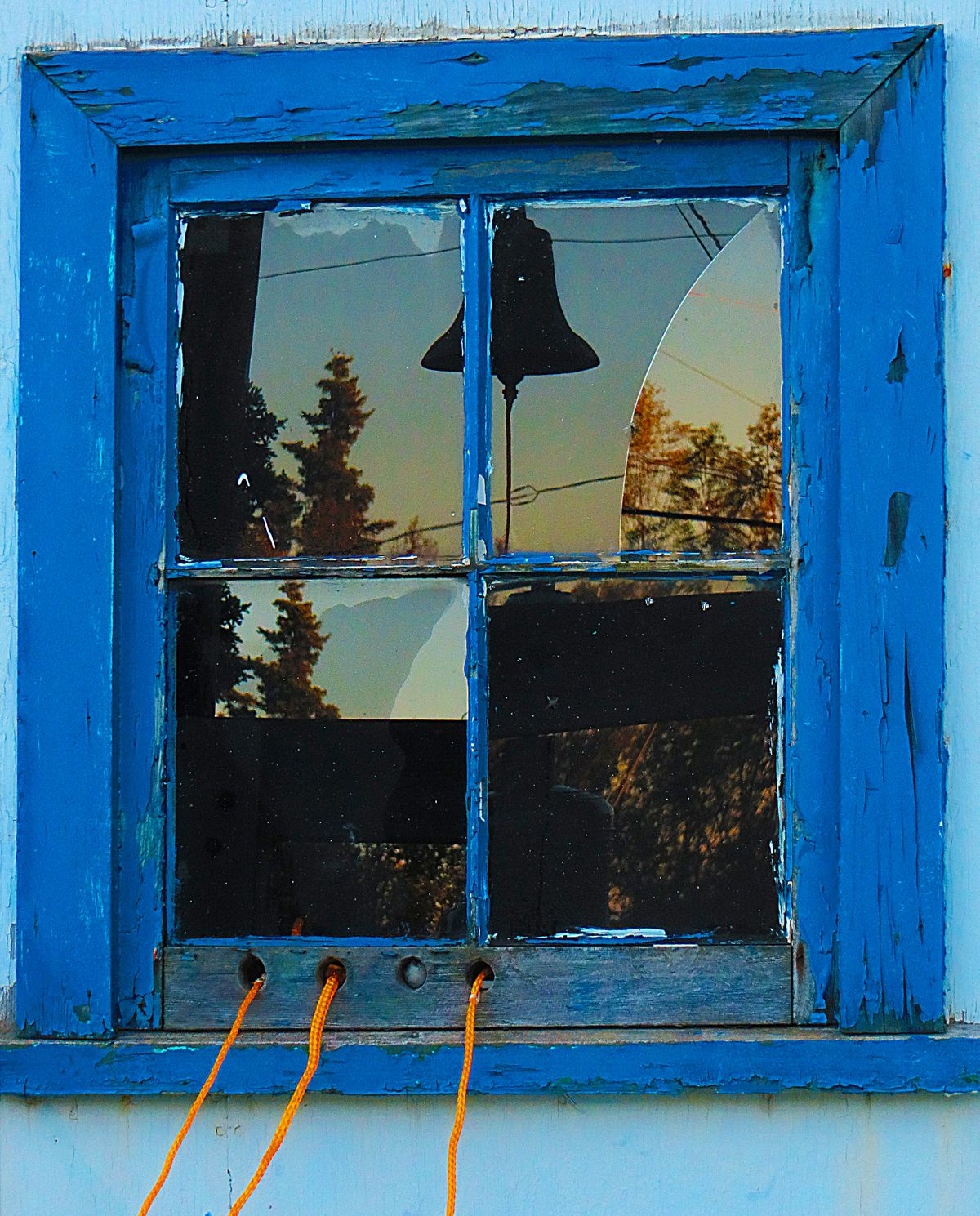 Early morning light is reflected in the fractured bell-ringer’s window at the Transfiguration of Our Lord Russian Orthodox Church in Dillingham in September 2013. (Clark Fair)

Early morning light is reflected in the fractured bell-ringer’s window at the Transfiguration of Our Lord Russian Orthodox Church in Dillingham in September 2013. (Clark Fair)

DILLINGHAM — What's in a name?

Well, plenty. The names we give to the places we inhabit speak loudly and often profoundly of identity and of belonging. Sometimes names fit the place perfectly. Sometimes they generate controversy — consider the recent narrow vote in support of changing Barrow to Utqiagvik. And occasionally communities, like people, grow into the names they've been given.

But in Dillingham, I was introduced to the ironies of naming.

The first business I patronized there was a pizza joint called the Windmill Grille atop Windmill Hill. Over a $40 pepperoni pie, I pondered aloud the name of this geographical location. Clearly, we were on a hill, but I saw no windmills. Had there ever been any?

An elderly resident assured me there had been. He remembered windmills on the hill when he was a child. The constant wind had been an early and reliable source of power, he said.

But even after the windmills disappeared — replaced down on the flats by power-plant turbines burning imported fossil fuels — the name of the hill remained.

Who or what was Dillingham?

Then there was Dillingham itself. On area maps I saw a mixture of Native names (Manokotak, Koliganek, Aleknagik, Nunavaugaluk, Kanakanak) and names associated with local history or geography (Clark's Point, Portage Creek, Cape Constantine). No surprises there. But who or what was Dillingham?

With help from former KDLG news director Bob King, who had researched and written about the name origin many years ago, I learned the backstory, which had echoes of Denali and Ohio politician William McKinley.

Upper Nushagak Bay and the Nushagak River mouth have long been inhabited by Alaska Natives, primarily Yup'ik people. The point of land at the confluence of the Wood and Nushagak rivers was called Curyung, a Yup'ik word loosely translated as "the point where clear and muddy waters meet." Some later dubbed it Snag Point. In 1837, a Russian Orthodox mission was established to the south and across the river at a place called Nushagak Point, and when the first salmon cannery was erected on the north side of the river in 1884, there was a village called Kanakanak about 3 miles southwest of present-day Dillingham.

However, some distinctly English names appeared on maps beginning in the 20th century. In 1903, after the Klondike Gold Rush, the U.S. Senate, eager to check on conditions in the Territory of Alaska, sent a wide-ranging subcommittee led by Vermont Sen. William Paul Dillingham to investigate. Although they traveled extensively from Southeast Alaska to the Yukon River and Nome to the Pribilof Islands, Dillingham and his team never came within 100 miles of Bristol Bay.

Meanwhile, across the river at Nushagak Point, Judge James Wickersham ordered the construction of a new courthouse near Kanakanak because of longstanding problems with the Nushagak mudflats. Wickersham, who had met Dillingham weeks earlier along the Yukon River when the senator's team passed through, named the new courthouse in honor of Dillingham.

Although the Kanakanak area itself later became known as Nelsonville (named for U.S. Sen. Knute Nelson, a member of Dillingham's subcommittee), the post office there also picked up the Dillingham name. When the post office was moved to accommodate the growing population around two canneries near Snag Point, the community (and eventually the whole area) became Dillingham.

When I was a kid, I lived on a homestead near "Soldatna," although some folks preferred "Soldotna."

Some of the anti-Soldatna residents disputed an early account of how Soldotna, named for the eponymous creek nearby, got its name. The story involved a supposed Russian encampment near Soldatna (or Soldotna) Creek, which flows into the Kenai River. Although no physical or written evidence for this camp had been unearthed, confirmation, said Soldatna proponents, lay in the name itself, which originated from the Russian word soldat, meaning "soldier."

Maxine Lee, who became the first postmaster in town, believed the Russian-camp story, so in 1949 she wrote "Soldatna" on the area's first application for a U.S. post office. Although only a handful of families were living there at the time, some of them were unhappy with Lee's choice, mostly because they disliked the spelling.

According to Donald J. Orth's 1967 "Dictionary of Alaska Place Names," the name of the creek first appeared in print as "Suldahtnah" in a 1918 manuscript almost certainly written by B.L. Johnson of the U.S. Geological Survey.

Regardless, the name changed for good in the 1960s, as did the name origin. The generally accepted notion today is that the name originated from the Dena'ina word ts'eldat'nu, meaning "trickling down creek" or possibly "stream fork."

Angry that the name had been changed, Maxine Lee's former husband, Howard, once railed, "The first spelling did have a meaning, but now it is just gobbledygook." He called the official who had allowed the switch a "jasshonkey."

These days, newcomers still often mispronounce Soldotna, but seldom does the name itself generate any discord.

Dillingham, too, seems a name firmly in place for now — although the area's original Native name remains part of the fabric of the community, particularly in the village corporation Choggiung, which is derived from Curyung.

On the other hand, Sen. Dillingham wasn't a bad guy, according to Bob King. Dillingham, he said, supported subsistence, saw great value in Alaska's canned salmon, and spent considerable time investigating the needs of the young territory. However, despite his contributions to Alaska, his expedition here is considered a footnote in a career spent largely serving the citizens of Vermont.

Besides, name changes, if desired at all, can be problematic. Even names applied by explorers or conquerors in ignorance or disregard of existing names can be tough to expunge. Bristol Bay, known in Yup'ik as Imarpik ("big bay"), was named by Capt. James Cook after his friend, Augustus John Hervey, the Third Earl of Bristol.

Clark Fair, a Kenai Peninsula resident for more than 50 years, is a lifelong Alaskan living in Homer.