The art of wilderness mooching: Giving thanks for anything edible 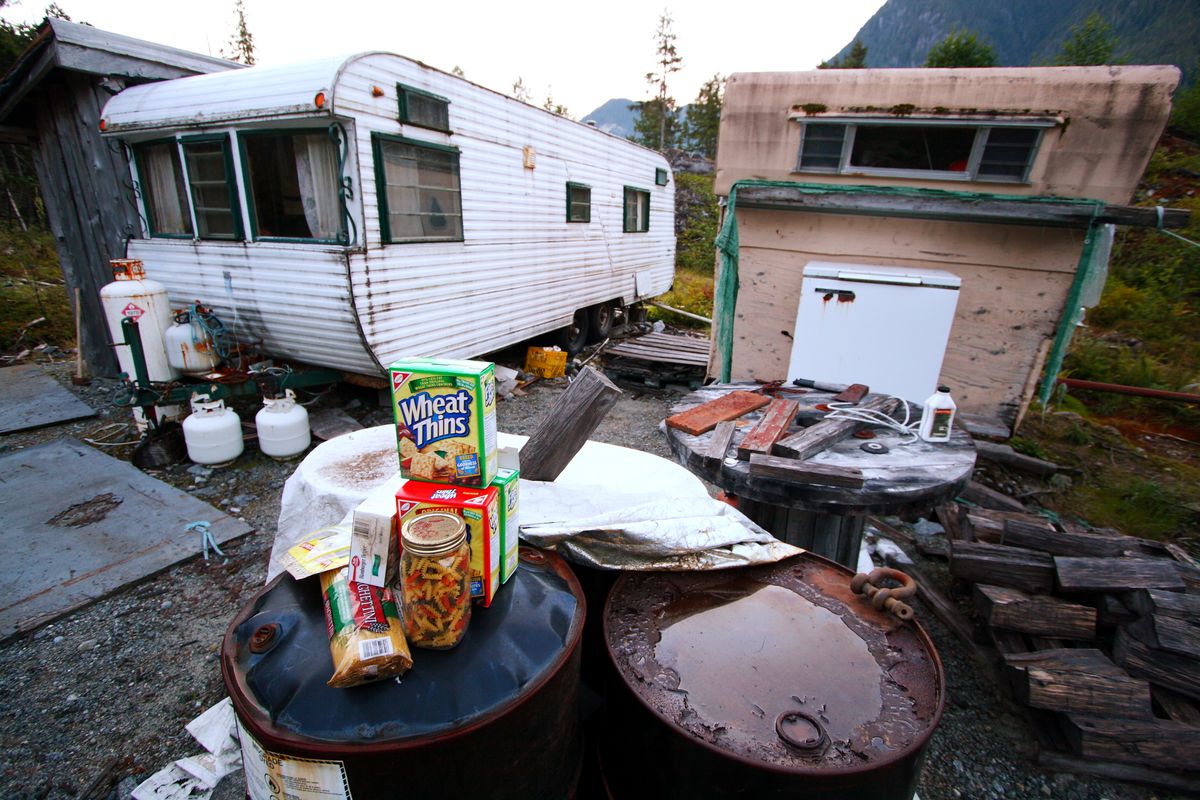 We salvaged 2-year-old Wheat Thins and other food at this abandoned logging camp. (Ground Truth Trekking)

We salvaged 2-year-old Wheat Thins and other food at this abandoned logging camp. (Ground Truth Trekking)

I finished my peppermint and popped another in my mouth. I unwrapped a dozen of the red-and-white striped balls and dropped them into a mug of hot water until they dissolved into something pink and glowing, reminiscent of a cartoon toxic waste spill. It was a wash of Pepto-Bismol-cotton-candy-toothpaste, and during one cold spring day on the Alaska Peninsula, it was dinner. My husband Hig and I passed it back and forth until the last hideous drop was gone. It was awful, and I was thankful for it.

Thanksgiving is one of my favorite holidays. I stuff my face, welcome friends, bake pies and know I've got a happy, lucky life to be thankful for. But feeling thankful?

Powerful gratitude requires a powerful hunger. In my life, that's come when the world is wild and cold and more difficult to travel than I'd anticipated; and any dollars I have are good for nothing but crumpled-up fire starter. Over the past 16 years, I've walked and paddled more than 8,000 miles across Alaska, lugging all the food my family needs. It's hard to really starve to death in the woods, but it's not hard to feel like you're starving. So I felt more thankful for that peppermint soup than for all my well-planned Thanksgiving feasts.

In fact, I've felt most thankful for the food I've mooched and scavenged in the wild. For unexpected windfalls and desperately needed calories, feeding a beat-down skinnied-up body that's burning through butter like an SUV through gasoline. Even when I'm eating actual gasoline.

A gas can broke in the snowmachine sled, swashing over the bag of treats, permeating bread bags and candy wrappers — everything but the metal cans of Spam. It was March on the Seward Peninsula in Northwest Alaska, and a snowmachiner had found us in a shipwreck, hidden from the blizzard that scoured the frozen ocean.

The gifts he brought fueled memories of a childhood road trip; gas station smell with fake fruit gum and a wash of car sickness. I unwrapped Starbursts, peeled the outsides off oily white bread, and ate it anyway. We ate everything possibly edible, then retreated from our buried ship to a blown-open cabin, where we found Krusteaz pancake mix torn open by a marauding fox. We ate that too. The storm hurled snow against the walls and we didn't know how long our own food would hold out.

The folks who gave us the peppermints lived in Egegik. The man who gave us the gas-soaked treats lived in Nome. I live in Seldovia, hundreds of miles from both of them. As an adventurer, I move quickly across unfamiliar landscapes, not always in the gentlest season, without the time or deep knowledge to feed myself wholly from the land. So eating becomes a calculation — pounds on the back vs. miles per day vs. waves and wind and the thickness of brush. It's an equation I often solve correctly but sometimes screw up.

So when I've been paddling through British Columbia for months and see a musty trailer at an abandoned logging camp, with a mold-coated table and a 2-year-old calendar, I think: "Only two years?" We found a way in, peeled mildewed cardboard from plastic liner bags, and decided that pasta and crackers couldn't really go bad. I plucked green sea urchins off the cliffs and broke them in half, digging out their orange eggs with 2-year-old Wheat Thins — a wet, salty crunch on limp, salty starch, the roe overwhelming the spice of old preservatives, while the urchins' tube feet waved in their last throes of life.

Another time, on the frozen lakes of Katmai National Park, there were no sea urchins. The concoction of butter and oats and sugar that we called "buttery goodness" had turned rancid and mostly inedible after weeks in a too-warm post office. The upscale lodge we'd skied to was shut tight against the winter and the bears. But we scoured the doors and windows with bear-like focus and bear-like metabolism, until we found the one structure we could break into. And we did, stealing sugar-free cocoa and beef stroganoff-flavored Mountain House, which we cooked on a fire and ate in half portions in a feast built on weeks of hunger-fueled daydreams. Then we closed up the building and left an apologetic note. Later we paid back the owner for those Mountain House meals. As camp raiders, we're more polite than bears. Like bears, we eat what we can get.

Sometimes in tiny Alaska villages, the store can be someone's mud room lined with canned beans, soda pop and frosting. We were happy to pay for anything light enough to carry, but Betty Crocker frosting was what Perryville had to offer, so we sat on the bear trails and ate it in spoonfuls. The ingredients were a marvel of chemistry and cloying sweetness that leaves me, nearly a decade later, unable to eat the outside of a birthday cake.

The bears were awake that time, and the scat they left on the trails was full of pumice swallowed along with a meal of rotten seaweed. I decided to be thankful for the frosting.

I was thankful in Kenai Fjords for the black rockfish we ate with salt boiled down from the sea. I was still hungry when it was gone, stuck on shore with a crashing surf, tired and sluggish from a starch-free diet of fish, fish and fish heads. We followed goat trails around the cliffs, to a meadow where we hoped to dig the bitter starchy roots of chocolate lilies. The meadow had nothing but dead stalks and slippery fall-brown grass. If there were lilies, we didn't recognize them. I was disappointed and exhausted and as curious as an explorer ever is. We pushed through a band of storm-twisted spruce to a beach we'd never seen.

Surf pounded against the hull of a fishing tender, one side missing, half open to the waves. We climbed onto the deck, into the cabin, and found a 2-year-old newspaper. Only two years? I lifted seats and tore through cupboards, tossing rain-soaked trash until I swung open a plywood door to a miraculously dry set of shelves that only someone as desperate as I was would think to look for. Our haul: graham cracker crumbs, carrot cake mix, bread machine mix, a bag of flour, a solid cake of sugar and a large bag of Granny Bunt's Complete Bakery Mix.

Our faces were bearded with crumbs before we got back to our camp, where we laughed and warmed our hands, and baked bread and cake on a wood stove hacked out of a washed-up oil drum while rain pounded in the darkness, and we were thankful because it was so improbable and wonderful and lucky.

Sharing food is an impulse nearly as deep as seeking it out, and for every improbable mouthful I've scavenged, I've been given dozens more.

And on one February day in Lake Clark Pass, the roar of a circling plane burst through the quiet scratch of our skis. A flutter of yellow streamers burst from the plane, and a plastic garbage bag touched down on the snow. A Moose's Tooth pizza from a stranger in an airplane.

I'm thankful for it all, even when I'm not hungry because I packed too much already and the weight of all that gratitude and granola is pulling my shoulders and squashing my spine. The flip side of ravenous mooching is a burning desire to share.

In Unalaska, we stomped through an eternity of waist-high grass until we finally rose up into low tundra, shrugged out of our overloaded packs, and sank down beside some blueberry bushes — and a large plastic tote. It was tied shut with a rope and partly grown over, abandoned four years earlier with cheery instructions for folks to take whatever they might need. I took a knife and a Twix bar, but left far more than I took; rice and crackers and all the flavors of granola bar I was sick of.

Erin McKittrick is a writer, adventurer and scientist based in Seldovia. She's the author of "A Long Trek Home: 4,000 Miles by Boot, Raft and Ski," the children's book "My Coyote Nose and Ptarmigan Toes" and "Small Feet, Big Land: Adventure, Home and Family on the Edge of Alaska." Her next book, "Mud Flats and Fish Camps: 800 Miles around Alaska's Cook Inlet," is due out in spring 2017. You can find her at GroundTruthTrekking.org.