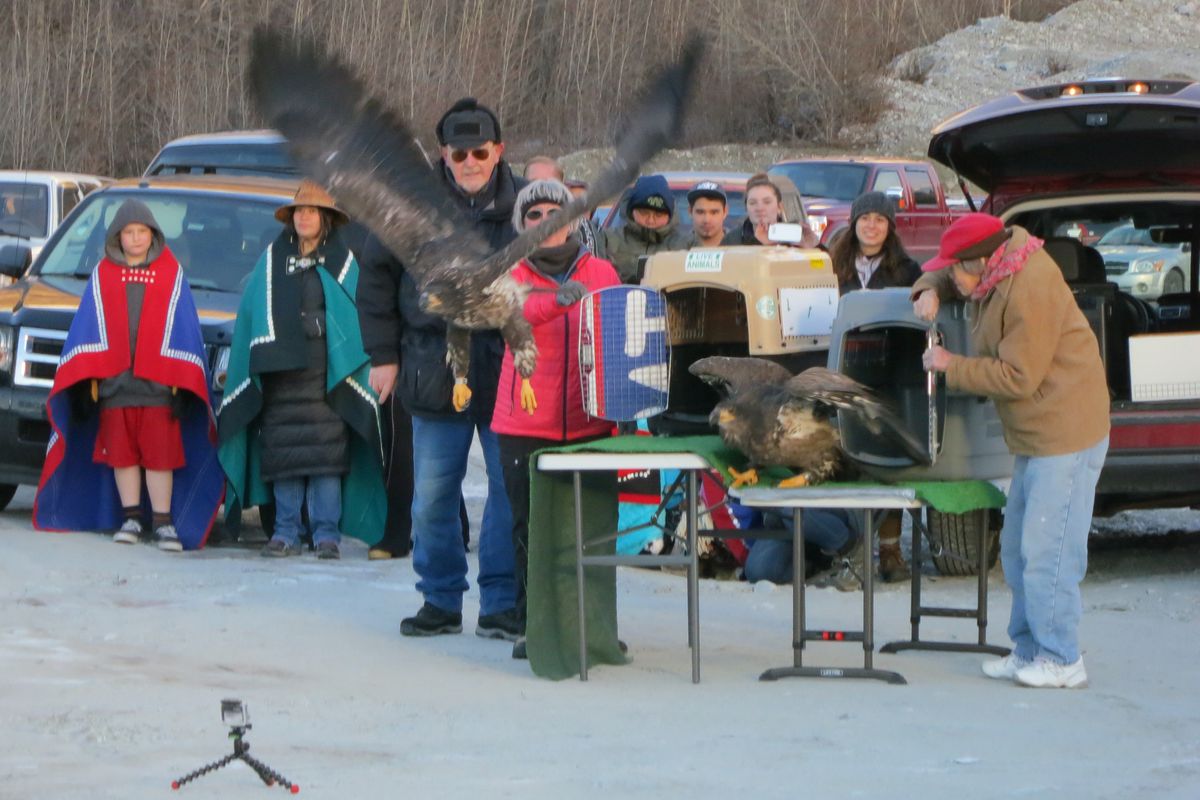 HAINES — I haven't been out to see the legendary November gathering of eagles in the Chilkat Bald Eagle Preserve in a few years. After all, I have plenty in my backyard where the Chilkat River meets the sea about 10 miles downstream from the boundary of the 48,000-acre preserve. The eagles don't seem to know all of Haines isn't their playground. There are two nests within hollering distance of my house, so each summer we see a handful of awkward, impossibly large fledglings testing their flight skills.

Sometimes they rest on my neighbor's deck. They cling to tall spruce branches too weak for their weight and teeter and sway before taking off again. They snag salmon at low tide and drop them in my yard because they can't get a grip. The mature birds give you that grumpy old eagle eye, especially when you have a curious dog walking with you.

Reports around town were that the first flyover counts that the festival host, the local American Bald Eagle Foundation, has done in 16 years revealed a record numbers of eagles. Some 2,072 were spotted in one flight. There are more, the foundation says, but they are hard to see without the contrast of white snow on the ground. It's been a record mild and sunny autumn.

My friend Beth and I took an afternoon drive 21 miles out the Haines Highway to the new Eagle Preserve visitor center in Klukwan. The sun shone on the snowy mountains and sparkled on the river. The cottonwoods cast long shadows. It was too beautiful for words, but we hardly saw any eagles. They were there, the count proves, but with the river still open, they weren't concentrated in the usual place where an alluvial fan creates a warm upwelling in a normally frozen channel. These pools make feeding on the late chum salmon run possible.

Chef Tony Strong, who lives in Klukwan, fed birders and the curious locals in the hospitality house. It had been a little slow. He'd served fewer than a dozen lunches that day and sent me and Beth home with quart jars of vegetable soup. I asked him where the eagles were, and he said they come in at dawn and dusk. With the unfrozen river running, they are spread out all over the valley.

There is something off balance here, beginning with the dry summer and those newly bare mountains that always have some snow, even in August. There has been a shift. Nature's timing is off. Beth feels it too. "I think our kids and grandkids will be OK, but the thousand-year outlook isn't good, is it?" she asked.

When the Chilkat Bald Eagle Preserve was created, eagles were an endangered species. The good news is thanks to efforts by places like the foundation in Haines, they no longer are.

Recently, I was visiting elders at Haines Assisted Living, and one recalled when eagles were killed here for a $2 bounty. Nora said she remembered a local policeman doing it. "He used to drive along the highway and shoot them out of the trees. I think it was because they were eating too many fish. Everybody killed them."

"No! Don't you see what they eat? All that fish. They'd taste terrible," Nora said.

Two eagles that had been rescued up north and nursed back to health at the Bird Treatment and Learning Center in Anchorage were released into the preserve on the festival's final day. The birds waited inside large dog kennels on a table overlooking the river.

Caring for injured eagles costs money, so they auction off opportunities to release the birds. Haines' Lucy Harrell's $500 opener closed bidding on the first eagle, a visitor from Minnesota won the kennel-opening job for the second eagle with a bid a few hundred dollars less.

Lucy is 92 and would be the first to say she is a tough old bird. She may be our most well-heeled resident, though you'd never guess that her mother was a Cabot from Boston and her father taught her to captain his yacht through the Panama Canal. She lives modestly, favors pork pie hats in summer and a lined cap with earflaps in winter. She used to cut her own hair. For the last decade Lucy has been giving away her family fortune, mainly to organizations that take care of the elderly and animals, but she donates to everything from the American Legion to the library.

At past releases, the birds have hesitated to fly off. Once, an eagle crashed into the river.

When Lucy and the other woman lifted the latches this time, Lucy said she felt "two explosions." The eagles shot over the river and disappeared into the cottonwoods. It felt like they brushed my heart when they blasted past and took a little piece with them.

Maybe it's their size, or those bold eyes. Perhaps it's the sacredness of the wild. Could it be these uncertain times we're living in?

"Yes," Lucy said when I tried to explain what moved me so. "It was a good feeling," she whispered. "An honor and a pleasure."