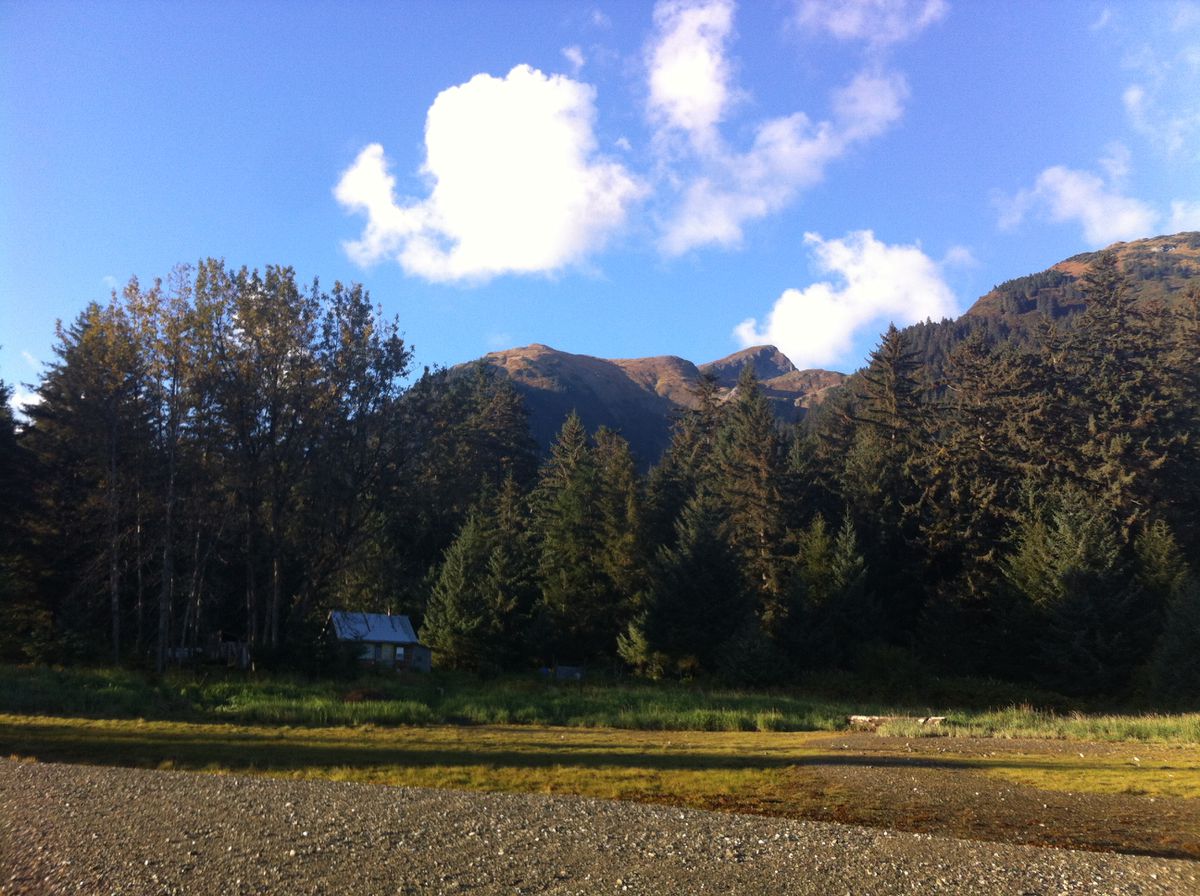 View of the cabin near Tenakee Springs from the water. (Megan Bush)

View of the cabin near Tenakee Springs from the water. (Megan Bush)

TENAKEE SPRINGS — Our outhouse faces the ocean, to the east of the Southeast Alaska community of Tenakee Springs on Chichagof Island. Even farther east is the mouth of Tenakee Inlet, and Chatham Strait, which is, by boat, our pathway to the rest of the world and their pathway to us. To get to Tenakee Springs, boats must chug, sail, paddle and float past our house.

The outhouse is a double-seater, with walls on all sides but the water one. Sitting on the John, one has a beautiful view.

"You can make whatever other changes you want to this cabin," our landlord said when we moved in. "But don't put a door on my throne."

In January, the view begins with snow-covered bramble framed by leafless alder silhouettes. Behind this, the beach sprawls flat, the high tide marked by a crisp line where snow ends and dark sand begins. Then comes the ocean, with its blue-green reflection of the evergreen hills on the far side of the inlet. And finally, the snow-speckled peaks rising up behind those hills. As I sit on that throne, I've watched geese, seals, seagulls and whales. Eagles have swooped down for salmon, then given up dramatically with a splash. Sea lions stick their pointy noses up out of the water to bark and holler. I keep waiting for a brown bear to time his beach walk with my use of the commode.

I also watch boats as they head in or out of the inlet.

"They can't see us," I tell my partner, Justin. It's an ongoing argument. He doesn't like being caught with his pants around his ankles when the neighbors go trolling by. The little dots of people in those skiffs have as much definition as Lego people, and I assure him that we look just as distant.

"They could have binoculars," he says.

I roll my eyes.

In the summer, we watch yachts, mini cruise ships, fishing boats, sailboats and the ferry head to town. These large boats are even farther in the center of the channel than the skiffs. I can't even see people on their decks. Instead, the boats themselves seem like characters from "The Little Engine that Could": windows that look like eyes, bows for noses in profile, smiles that meet in the ocean. Crabbing boats seem ominously angry; yachts remind me of Pinocchio with their extra-long noses. I'll dangle my feet from the edge of the outhouse and watch them go by.

For privacy, Justin has added a camo Army-surplus poncho curtain to the far hole. A temporary door, easy to take down if we ever move out. I never bother to use it. I like the view.

The last time we left town, Justin and I sat in the observation deck of the ferry. As we departed from the Tenakee dock, rounded Graveyard Island and the spit at the mouth of Indian River, Justin nudged me and pointed toward the window. There was our cabin, a bright-yellow box with the white plastic sheet atop the leaky roof. There was the woodshed, the old cottonwood in the front yard, the outhouse and our skiff. The only property in the cove.

But Justin wasn't pointing at our cabin. He was pointing at the three sets of binoculars just in front of us, trained on our house. Perhaps hoping to get a peep of people going about their day, doing their business. I almost tapped them on the shoulder and apologized for disappointing them.

Megan Bush lives in Tenakee Springs with her partner and two dogs. She is finishing her first book, a memoir about her family's experience with schizophrenia.