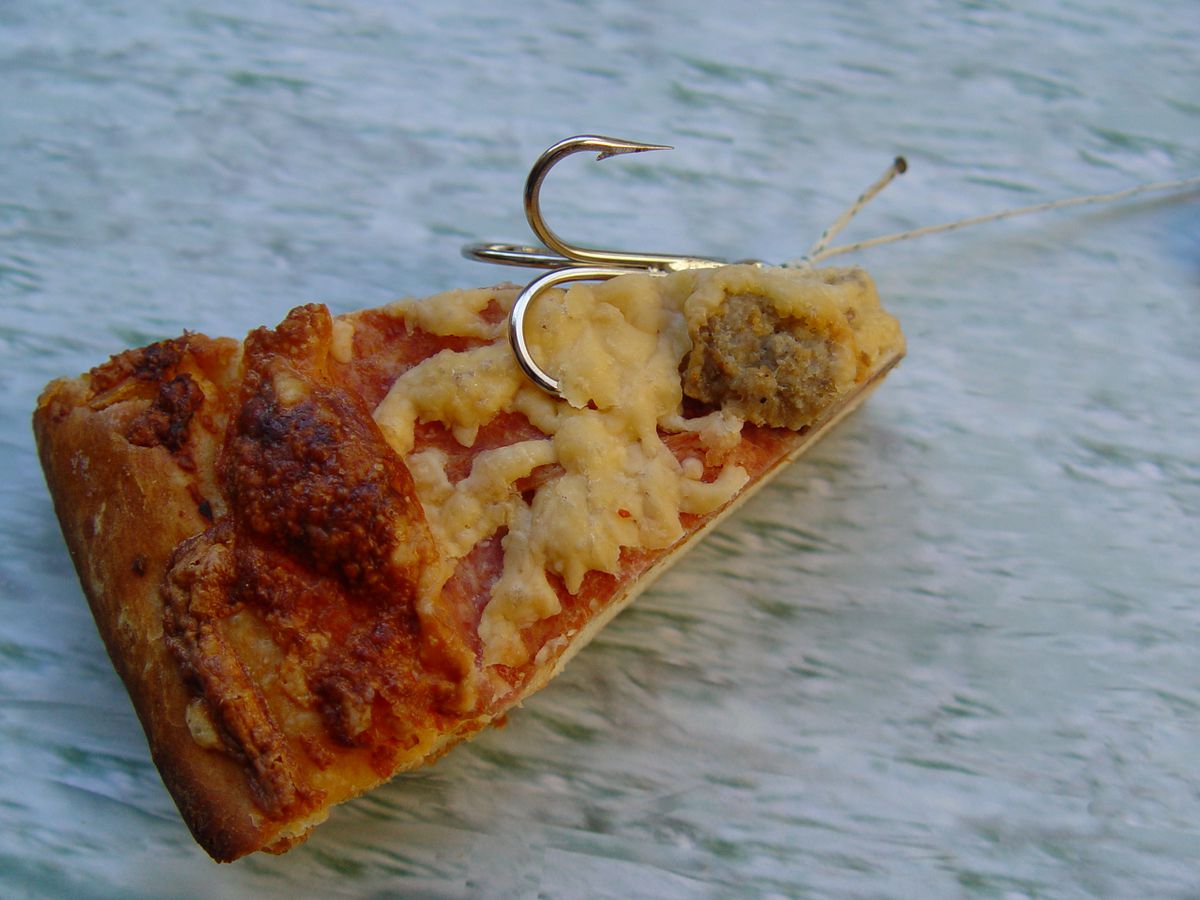 A neighbor once had a pizza dropped to him that landed on the rotting ice of Lake Clark. He couldn’t trust the ice enough to walk on it, and finally got his fishing pole and a big treble hook to snag himself dinner. (Photo illustration by Steve Kahn)

A neighbor once had a pizza dropped to him that landed on the rotting ice of Lake Clark. He couldn’t trust the ice enough to walk on it, and finally got his fishing pole and a big treble hook to snag himself dinner. (Photo illustration by Steve Kahn)

LAKE CLARK — In Bush Alaska, dropping items from airplanes is a fairly common means of delivery. I suspect in a lot of crowds, you'd have to draw a number to tell the story of your experience from either above or below. The practice certainly has practical — even lifesaving — aspects when emergency gear like sleeping bags, clothing, medical supplies, radios and food are dropped to needy people on land and sea.

Pilots hone their airdrop skills at air shows by dropping flour bombs, rubber chickens and even bowling balls, attempting to hit a target. Some pilots calculate the weight of the object, the speed of the aircraft, the altitude, the drag on the object as it falls, the wind direction and speed. Others just let go at the right time.

For years, a friend of mine dropped frozen turkeys during the holidays to weather-bound Bush rats. It is, of course, an ideal form of air delivery for newspapers and mail.

Bananas, eggs and beer, however, are not the best choices for inexperienced droppers. A mischievous outfitter I worked for briefly responded to one of his guide's pleas for more reading material by dropping him a novel with the last 20 pages torn out. A neighbor once had a pizza dropped to him that landed on the rotting ice of the lake. He couldn't trust the ice enough to walk on it, and finally got his fishing pole and a big treble hook to snag himself dinner. Reportedly, it didn't put up much of a fight, but he claimed that it sure tasted good.

I've had to duck a few times so as not to chance tires mussing my hair during a mail delivery airdrop, and I've searched more than once in ever-widening circles for errant items that didn't end up exactly where the pilot intended. I offer two of my most memorable stories.

Unplanned and off the mark

Back in my guiding days, my friend Jerry offered to haul gas for me in his single engine PA-12 to the Farewell area. He had several containers, both plastic and steel, on the rear seat, tied down to the cross bar. At the entrance to Rainy Pass, severe turbulence caused the plane to make a rapid and violent descent.

The rear seat cover, which was not secured, rose up unexpectedly, causing the gas cans to shift. Suddenly they jammed the rear throttle wide open. Jerry reached around as best he could and freed up the throttle, but as soon as he let go it was forced wide open again. With one hand on the stick and the other holding the cans off the throttle, he made a 360-degree turn — just to hit another downdraft. This time, the rear seat popped over onto the rear stick stub, making it hard to control the airplane's ailerons and elevators. Gas cans jammed the throttle, and the seat cover jammed the stick.

"I could deal with one of the problems, but not both at the same time," Jerry said. To make a turn he had to let go of the cans and lift up on the seat, but then the throttle was stuck open and the airplane would begin climbing like crazy.

Items stored under the seat, like coils of parachute cord, ended up rolling around on the floor. Jerry threw anything he could get his hands on out the window. Random, mini-airdrops.

Alternating between stick control and throttle control, he made it to Farewell Lake hoping to attempt a landing. But the wind was just as strong there, and he finally opted to airdrop the gas just off the end of the lake, where he thought the containers could perhaps be located. Somehow he managed to untie and wrestle the cans out the door one at a time. But because of the strong wind, when he looked around after the last drop, the lake was not in sight. With control regained, he flew on to McGrath, refueled and returned home via an alternate route.

Afterward, I both walked and flew over the area near the end of the lake several times, realizing full well that my mission was not gas rescue or even recovery, but something more like curiosity. As in: What does a smushed gas can planted into the tundra look like? No signs of the containers ever showed up. Though Jerry's airdrop accuracy that day was subpar, I'm sure he felt lucky just to have made it through the ordeal without crashing.

Having been without mail for a long stretch during a cold snap in the middle of a snowy winter, I preheated my airplane for a trip to Port Alsworth. While at the post office, I called over to former Gov. Jay and Bella Hammond's homestead to see if the caretakers at the time, Wendy and Woody, wanted me to get their mail too. In her wonderful British accent, Wendy answered in the affirmative. I explained that since they didn't have a strip packed down and I was on wheels, I would have to airdrop their mail.

Before heading their way I bundled the mail into two packages, festooned them with surveyor's tape, and set them in the back seat. Approaching the Hammonds' homestead I could see someone perched on an idling snowmachine at the edge of the bay.

I tucked one bundle of mail onto my lap and circled to set up for a drop. I hastily slid open the side window, dropped the package and quickly shut the window. Only recently had it warmed up to 20 below, and I was wrapped in a down parka and wool pants, barely able to move. The first package didn't land exactly where I intended, partly because leaning my shoulder out of the opening was akin to doing jumping jacks in a sleeping bag.

I turned to circle for the second drop, determined to be more precise. With haste encouraged by a blast of frigid air from the quickly opened window, I forced my bulky down-covered shoulder and arm outside and let the package drop. When I reached over to close the window — it was gone. My choice was fairly straightforward, fly straight home or fly straight home.

When I got home I turned on the marine radio to call Wendy. I wanted to make sure she had found both packages. "Yes," she said. And after a pause, she offered a hybrid question and statement in her delightful accent: "And I believe … I have … your window?"

I told her to keep it as a souvenir. Anne and I planned to fly to town the following day and I would buy a new one. A piece of plywood and duct tape served as a temporary fix. Temporary was the operative word, because the tape only held for 30 minutes of a two-hour flight. But the rest of that story is more about flying in extreme cold and the limits of adhesive than it is about airdrops.