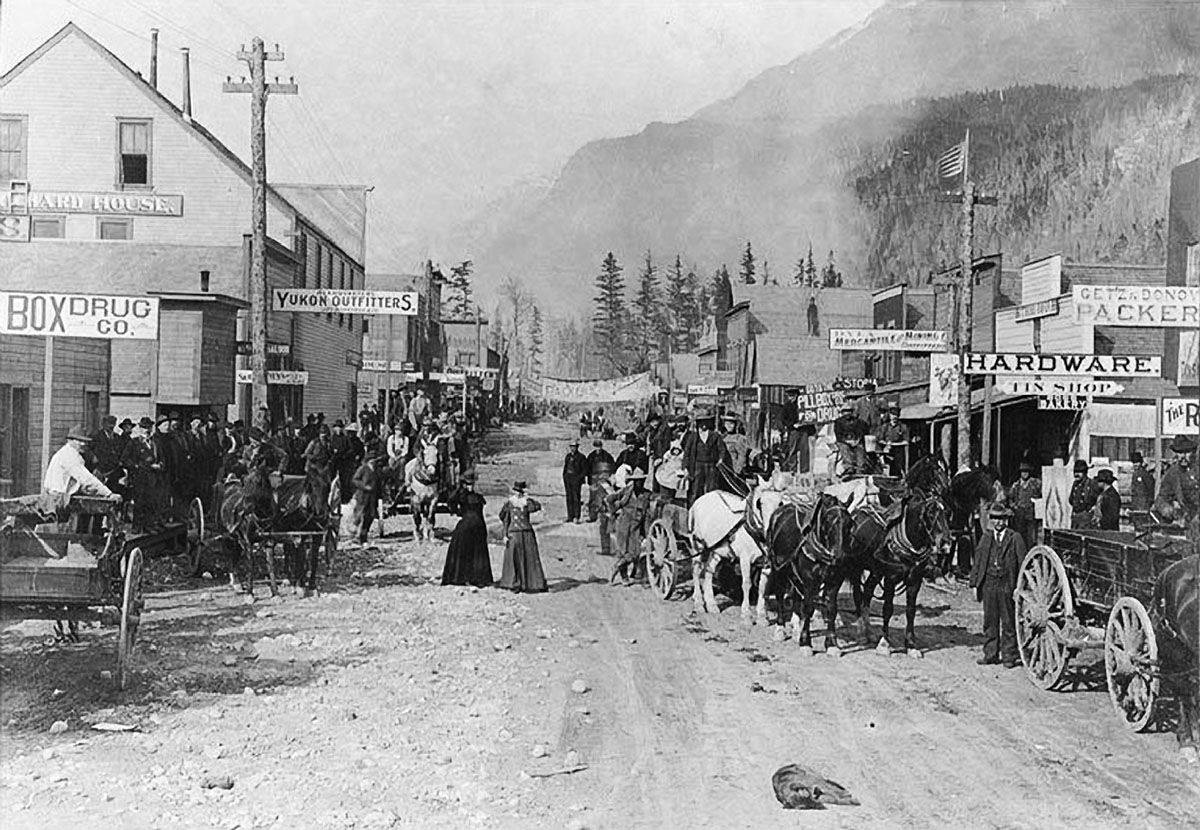 Bustling Broadway in Skagway on May 20, 1898. (Eric Hegg / University of Washington Library)

Bustling Broadway in Skagway on May 20, 1898. (Eric Hegg / University of Washington Library)

All for the Greed of Gold: Will Woodin's Klondike Adventure

Nothing in northern history is as heavily romanticized as the Klondike Gold Rush. The era has been mythologized as the last great leap in westward expansion, when thousands flooded north and a culture of greed, gambling and gunplay swept over the Last Frontier.

The popular narrative makes for good novels and movies, but apart from the exploits of Soapy Smith, it didn't happen that way. As we learn from "All for the Greed of Gold," a recently published firsthand account of life on the trail to Dawson City in 1898, what mostly transpired was a lot of hard work. It's not the stuff of Hollywood productions, but it's actually fascinating for what it tells us about the people who went and what their experiences required of them.

Will Woodin was 24 years old in 1898 when he went north. Born in Michigan, he had moved to Seattle with his family as a child. Editor Catherine Holder Spude, author of "Saloons, Prostitutes and Temperance in Alaska Territory" and an astute historian of Alaska's gold rush era, explains that Woodin and his father Jay were part of an emerging middle class that left farming in the late 19th century and migrated to cities, seeking a better life.

Woodin was a cabinet-maker when his father, a carpenter with his own contracting business, traveled north in 1897 to investigate the possibilities brought by the newly announced gold strike. A businessman, he recognized that selling goods to miners was a better bet than staking a claim. The following year, he engaged his son Will and three other men to haul freight over White Pass to Dawson. For Will, a lifelong diarist, it was the adventure of a lifetime.

Woodin's memoir, written more than a decade after his journey, was never published, and along with his other papers — including a diary of the trip — eventually fell to his great-niece, Sandra Bixby Dunn. Dunn learned of Spude's work during the 1980s as an archaeologist and historian based out of Skagway and brought her in as editor. The result is this book, which largely follows Woodin's memoir, with diary entries inserted as needed both to expand on the story and highlight some of Woodin's complaints and hardships that he omitted from what he intended to be a published book.

What readers are presented with is a detailed account of what traveling to the gold fields was like. Woodin was a skilled writer whose language and descriptive abilities bring his expedition to life. Though he did not attend college, he was clearly well educated. Spude writes in her introduction that he was prone to chronic spelling errors and misstated a few facts, but his narrative skills were nonetheless remarkable.

The Woodin party left Seattle on March 1, 1898, aboard a steamer bound for Skagway. The Inside Passage and towns visited along the way are beautifully described.

The Skagway he encountered differs tremendously from that of popular myth. While it was a mess of tents, quickly tossed up buildings and ongoing construction on every available lot, it was a well-behaved crowd of men too busy preparing for the trail ahead to be sidetracked by vice and violence. (Woodin reports one murder along the trail, and it's clear from his writing that this incident stood out as highly unusual, rather than the norm that pulp-fiction authors would have us believe.)

The party chose the White Pass route rather than the more heavily used Chilkoot Trail. They were hauling much more gear and food than the prospectors, and while the White Pass Trail was a longer way of getting to the lakes on the other side of the mountains — where they could build boats and begin the waterborne trip to the Yukon River — the trail was nowhere near as steep, so horses could be used to pull heavily laden sleds.

Woodin provides a well-paced account of the trip up the mountains. The party needed to get to Windy Arm on Tagish Lake before spring melted the snow and their sleds would be rendered useless. Once there they had to construct boats from available timber while waiting for the ice on the lake to go out so they could begin their float. There were dangerous rapids to be navigated once the Yukon was reached. Woodin's description of running White Horse Rapids is particularly captivating.

Along the way they got sidetracked by gold fever, chasing a baseless report of pay dirt on the Pelly River. They didn't reach Dawson until July 17, four and a half months after leaving Seattle.

Details of home life along the trail stand out. Violence was rare, but drownings weren't, and one such death that Woodin witnessed was the basis for a short story he wrote later in life; it's included here. There was the ever-present threat of disease, too. Woodin himself fell deathly ill in Dawson, probably from typhoid. Mosquitoes hounded them constantly, the summer heat was an unexpected hindrance, and in one cringe-inducing moment, Woodin persuaded a fellow traveler to extract one of his teeth with forceps.

There was also, despite the hubbub of the trail, perpetual loneliness. "A sense of lonesomeness took possession of me in a way that I had not felt before," Woodin wrote. "A realization of the undertaking we had gone forth to accomplish seemed to present itself to me in a different light … Facing the perils and hardships of an unknown country, sacrificing the comforts of a civilized home, which now seemed so far away … And all for the greed of gold!"

Woodin spent just one summer in the north, but this luckily recovered account is a timeless journey for readers, who will feel they traveled beside him.