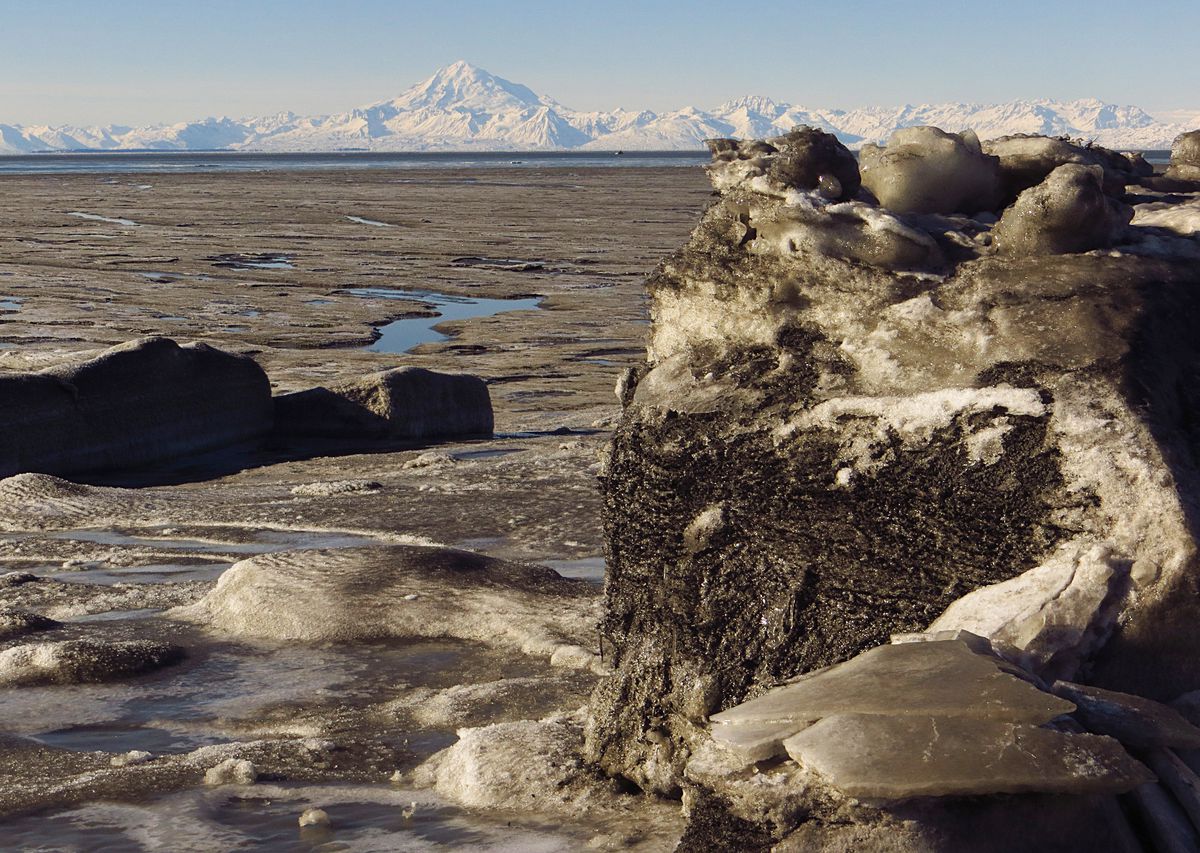 The Kenai River flats at its mouth is exposed by a minus tide in March 2017. Mount Redoubt is across Cook Inlet in the background. (Clark Fair)

The Kenai River flats at its mouth is exposed by a minus tide in March 2017. Mount Redoubt is across Cook Inlet in the background. (Clark Fair)

KENAI — There's no silence here in winter, but for those who have visited the mouth of the Kenai River in July, it may feel like silence.

On an overcast but windless mid-February afternoon, I hear whispers — the turbid, gray waters undulating in a slow-rising tide, the soft grinding of ice on ice, and the shuffling of sand and stones along exposed crescents of beach. I also hear the occasional croak of a raven, the barking of a dog in Old Town, the steady background hum of traffic on the Spur Highway and the distant chatter of a malcontent eagle perched on the high bluff to the north.

And yet the quiet here is so pervasive that I am aware of my own breathing, nearly my own heartbeat, as I dance-step around and over icy obstacles in the sand.

Although the day is warm, the pewter clouds are threatening snow or perhaps rain. The parking lot at the terminus of South Spruce Street, a jumble of vehicles and swarms of salmon-obsessed Alaskans in July, now lies empty. I amble along the beach for nearly an hour but see no other person. The Kenai Mountains and the peaks across Cook Inlet are draped with altostratus. I feel cocooned by water and weather.

In winter, the Kenai River is peaceful. Solace and solitude can be found in this alien landscape of tide-washed clumps of beached ice and windswept snow. Immersed in this environment, I can almost forget what it becomes in mid-summer.

From 6 a.m. to 11 p.m., between July 10 and July 31, this beach and the one opposite across the wide river mouth will host a frenzy of human activity. These waters, where river and ocean mingle, will froth with the stirring of people (from a few hundred to more than 2,000) intent on catching red salmon. Net-wielding, rubber-clad, cooler-toting fishers will tromp along the sand, enter the murky surf and extend nets of various configurations in attempts to add meat to their freezers, their smokers or their canning jars.

Upstream, out on the river, men and women in boats will ply the waters with the same intensity — their outboards constantly engaged. Above will drift a watchful, strident contingent of gulls, landing wherever the prospect for a meal appears.

The consistent aspects of these 22 days will be people and salmon, sand and blood and water and noise. Opportunity may be rife then, but solace is lost.

To revisit the serenity, I returned to the river mouth in early March. Despite the contrasts to my February sojourn — bright sun, a light wind, temperature near 10 degrees and a minus tide — the calm prevailed.

I was not alone this time, but only one other visitor stepped from a vehicle: an older woman, dressed warmly and carrying a large purse, which she purposefully clutched to her chest and held away from me as I passed her — she returning from a glance at the river, I leaving the parking lot to tread the narrow, drifted path to the beach.

An occasional car or truck entered the tidy, plowed lot or drove the narrow auxiliary road along the dunes. As in February, I could still hear the murmur of distant traffic and the infrequent call of a raven. This time, there was also the roar of a single-engine aircraft banking to land at the Kenai Airport, but little else to disturb the quiet. Low tide eliminated the usual sounds of surf, and the wind muffled most other background noises, so I became keenly aware of my Xtratufs crunching across the jumbled landscape.

Far across Cook Inlet stood Mount Redoubt, a sentinel in the blue-white clarity of the cold, flanked by more diminutive peaks. Closer, sequins of frost glittered on the tidal flats, exposed and encrusted, traversed like capillaries by a network of tiny streams trickling seaward.

Up from the flats was a comparatively smooth layer — dotted with rounded, river-worn lumps of ice, most appearing like bubbles of silt and frost. This was the last part of the beach stroked by the retreating tide.

At the next level up were large blocks of ice — from the size of Winnebagos to small appliances — stranded early, because of their great weight, by the receding waters. The tops of these bergs were pocked and silt-plastered where waves had slopped over them and dripped off. Many had sharply cut sides, as though they had been sheared away from some larger mass. The cuts revealed a sedimentary-like layering, often fringed with icicles on the sides that faced the sun.

Smashed against these blocks were plates of ice, like huge shards of frosted glass, lifted and shoved shoreward by waves.

Everything touched by current or surf bore fossilized evidence of the movement of water, swirling, rushing, meandering, lapping, ebbing and flowing. As it traveled, artwork was carved, architecture designed. Frozen ripples, ponds, currents, waves formed a veneer over each surface.

Higher than the water could reach lay a swath of unblemished snow, above the high-tide mark, free of silt and sand, and shaped only by prevailing winds. This layer, interrupted only by the roped-off dunes and the auxiliary road, swept across a low marsh all the way to the bluff.

Standing there amid the snow and water and ice, I felt contented, unhurried.

But in four months' time, this whole scene would be transformed.

The snow and ice would be gone. The tranquility, too, will have melted away. The river would be high and surging, fishing vessels passing upstream and down. The high sands would be green with beach grass, and the whole scene would be alive with raucous human activity.

I pulled my hands from my mittens and lay them across the edge of a low block of ice to give me a dry, clean place to sit. Facing the inlet, my hands jammed into the pockets of my winter coat, I squinted into the early afternoon sun and contemplated the slow crawl of change, the inexorable, revolving tides, and the flicker of night and day.

Clark Fair, a Kenai Peninsula resident for more than 50 years, lives in Homer.