The bear man of McNeil River 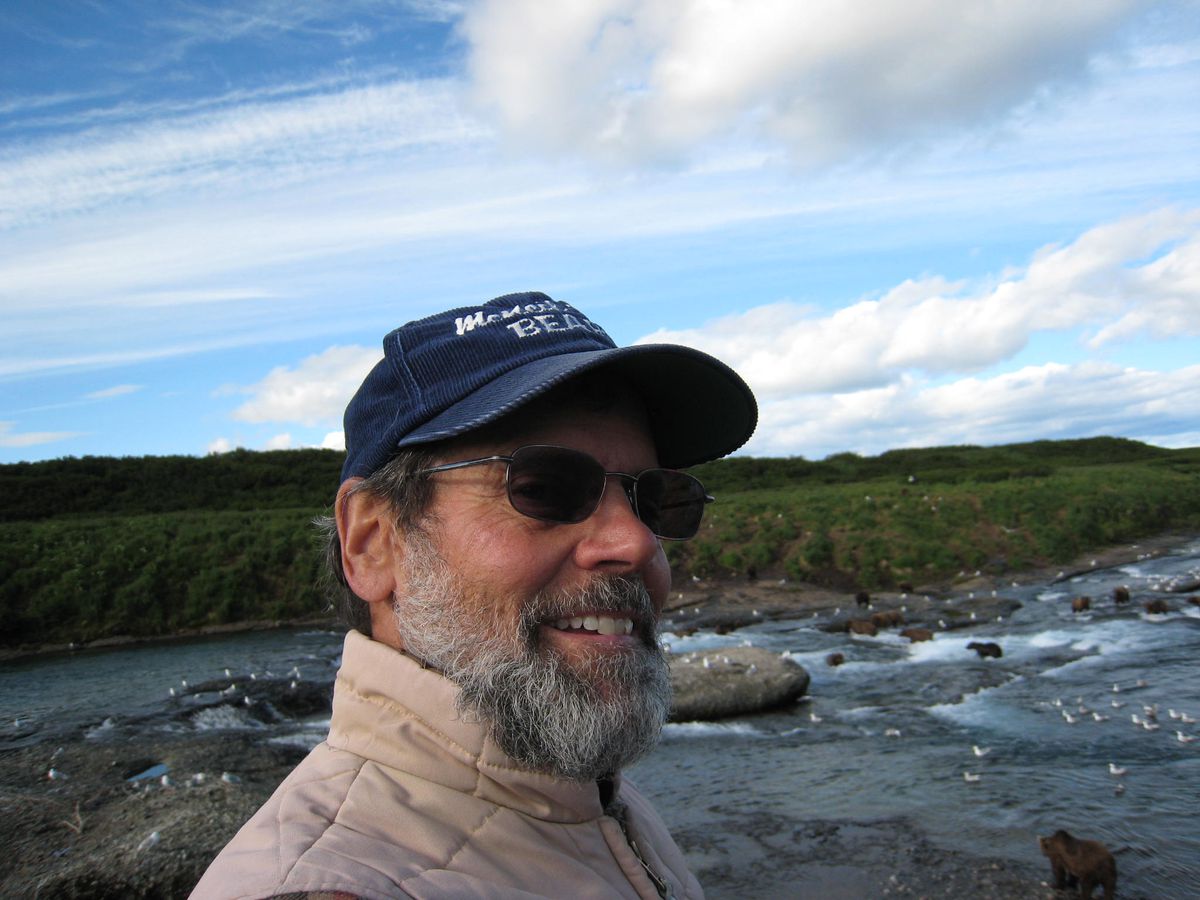 McNEIL RIVER — The bear, wet fur plastered to his massive and massively scarred body, trotted his still-flopping salmon past the little group of humans watching and photographing from a line of camp chairs. One of the humans turned away to take a selfie with the bear behind her.

Larry Aumiller shook his head and laughed. "That's a first for me."

At the McNeil River Falls, in late June 2016, the world's largest concentration of coastal brown bears was gathering again. For half a century, the feasting bears have found protection within Alaska's 200-square-mile McNeil River State Game Sanctuary. (Established by legislation in 1967, the sanctuary celebrates its golden anniversary this year.) And Aumiller, who started the sanctuary's safety-conscious (for people and bears) program in 1976 and retired as its manager in 2005, was again part of the congregation.

"Emeritus," is how the current manager, Tom Griffin, refers to the gray-bearded Aumiller, back to assist the new generation of guides. Others might call him an icon. Certainly he's known and revered internationally for the program he put into place and ran for so many years and for his extensive understanding of bear behavior. Even in retirement, he can't seem to stay away long, once returning as an ordinary guest with his wife and daughter, other times as a volunteer and to fill in as staff.

In person, Aumiller is a very modest, even shy, man. He deflects questions and praise away from himself — to the biologist who initiated McNeil's permit program, to the various staff, to the state employees who manage the fish runs, to the well-behaved bears themselves. It always was a team effort, he insists, and the transition from his earlier role to the present was easy. "There's a little bit of Buddhist in me," he said from his sprawl in grass above the falls. "Things are temporary, not owned. I never felt (the program) was mine."

Still, there's no denying that Aumiller, originally an art student with no training in biology but harboring a love for wild places, set the philosophy and protocols that for all these years have allowed bears and people to safely coexist in close quarters.

The secret, he says, was making people — so varied in their personal behaviors — act predictably around bears. For more than 40 years now, each summer day at McNeil a maximum of 10 permitted visitors have left the campground to walk single-file across wetlands, mudflats, and meadows to viewing spots, either along Mikfik Creek, where the bears fish for sockeye salmon in June, or to the McNeil River Falls, where they fish for chum salmon starting in late June. In the same places at the same times, doing the same things — people have become part of the known world for, now, generations of bears.

The biologists call this "neutral habituation." That is, the bears are aware of us and accustomed to seeing and hearing us, but are neither fearful nor attracted to us. They know we're not going to harm them, but we're also not going to feed or otherwise tempt them to interact with us.Curious young bears quickly learn that we're not worth investigating.

On one of our treks through the wetlands, we stopped when we spotted a female bear and her two cubs lifting their heads over the grasses. The protocol is to never follow a bear or interrupt its behavior, so we stood in our line on the muddy trail for close to an hour as the bears grazed toward us, audibly tearing at grasses much like cows in a field.

Aumiller, at the end of our bunched line, watched the scene with the same interest as the rest of us while our guide for the day, Ray Pohl, stood ready at the front end to intervene if any of the three bears either failed to notice us or expressed too much interest. All the staff use the same techniques originally developed by Aumiller to ensure safety. These consist of — if necessary — escalating ways of speaking and posturing, standing and turning, holding out a cap or clapping. The staff carry shotguns but have never, in Aumiller's tenure, fired them.

That day, the three bears eventually crossed our path, just feet away. The mother bear was certainly aware of the situation but seemed unconcerned about us or — for that matter — the exact location of her cubs. The young ones looked us over and lifted their noses, giving us a good sniff before they ambled on.

Another time, that same female with cubs grazed near the unfenced camp, and a staff member stood at its edge with the ultimate tool, a pot of rocks ready to rattle. The bears know the camp, where visitors pitch tents and keep food in a communal cookhouse, is off limits to them. They pass by as they move from sedge flats to the mudflats where they dig for clams at low tide and where, when the tide rises, they chase salmon through the shallow water.

Before Aumiller came to McNeil in 1976, access to the sanctuary was uncontrolled. "People were everywhere and carried guns," he said, raising his eyebrows as if the vision of that time still startled him. One photographer even set up a canvas blind in the middle of the falls, right on a fishing rock used by the bears, with rushing water flowing around him. Aumiller was determined to create a safe place, adhering to the purposes for which the sanctuary had been established — first to provide permanent protection for brown bears and other fish and wildlife populations and, second, to manage human use and activities in a way that was compatible with those protections.

To Aumiller, the dual goals meant that human use should not scare bears away or spook them in any way. "It turned out that if (the bears) are comfortable, they're safe. If they're comfortable and stress-free, you're off the hook. They trust us. It all worked together. To make them comfortable, we have to watch them."

The message, he says, is "we can live with bears. You have to do the right things, and accept a low level of risk."

Aumiller sometimes calls this "the dance" — people and bears as partners, acknowledging and responding gently to one another. They recognize and tolerate us, as we recognize and learn from them.

Other places, in Alaska and elsewhere, have developed their own bear-viewing programs built on McNeil's example. At Brooks River, in Katmai National Park, day access is unlimited, but viewing platforms separate people from bears, and staff provide bear education. Pack Creek and Anan Creek, both in Southeast Alaska, have established bear-viewing programs involving permits, platforms and education. An increasing number of private businesses fly or boat visitors to watch bears, generally maintaining procedures pioneered at McNeil to allow bears to live their bear lives undisturbed.

Wildlife professionals from all over regularly visit McNeil to learn its ways. They've come from several national parks in the Lower 48, from management agencies, from parks in Japan and Italy.

At 4 p.m. on an afternoon, eight bears, all adult males, were fishing at the falls. Donny, Mask, Rocky, Holden, Plunger. The staff, who want to avoid anthropomorphizing or suggesting that the bears are anything other than wild, are quick to explain that the names given to bears are simply a way of identifying them, easier to remember than numbers. They see the same bears day to day (as many as 144 individuals in a given summer), year to year, and get to know where each stands in the bear hierarchy, which ones are easygoing, which ones could be a little aggressive. These days, they avoid assigning human names and rely instead on characteristics or other associations.

Early in the season, there was a lot of posturing among the bears as they reacquainted themselves at the falls. Suddenly there was a squabble over a fish, two bears on their hind feet, grappling like wrestlers and biting at one another's necks. Saliva flew. Their deep-throated roaring reverberated over the already deafening falls.

This was only the prelude of the crowd to come; at the peak of the salmon run there may be 70 or more bears fishing within sight, mostly at ease with one another as they focus on fattening.

Aumiller nodded slowly at the disturbance, showing again his Buddhist side — or perhaps it's simply the calm he's absorbed from so many years of appreciative living in a wild place among bears, foxes, fish, wild irises, the crying gulls and the swoops of swallows.

Certainly he's given considerable thought to what McNeil's example can mean in the larger world, beyond those places specifically set up for wildlife conservation. He puts it this way: "If you can learn to live with a large furry thing that can bite you, you can probably live with anything. Which is good — you might say essential — for our ability to share the Earth." There are practical, even selfish, reasons to share, but Aumiller is more interested in the spiritual aspects. He wants our species to know and appreciate all of life's wonders, to understand that every living thing is important. "You can make this point with ants," Aumiller said with a smile, "but bears give you a larger audience."

For now, the animal kingdom before us — people and bears doing their dance at the McNeil Sanctuary — appeared peaceful. Conflicts over hunting on adjacent lands and with commercial fishermen once threatened the McNeil bears and bear viewing but those were settled years ago. Aumiller is less sanguine about the future.

They used to say at McNeil, "When the irises bloom, the chum (salmon) come in." This was typically at the beginning of July, with the salmon run peaking near the month's end. But in 2016, the irises bloomed in late May, and the fish were leaping the falls during June's third week. What might climate change mean for bears? They're adaptable animals and know or learn when and where to find their best food sources. Fishery biologists worry more about the ability of salmon to match their life cycles to warming waters and the foods available to them.

Aumiller sat upright to keep an eye on a bear walking behind us. "I'm not a doom-and-gloom guy, but human-caused change could be problematic. If it affects fish — that's key to the whole system."

One thing he knows for sure: "People are still in awe (when they get to see bears being bears). They're still amazed. For some people, this is the best time in their lives. I get to be with the best people on the best days of their lives. How could you not feel good about that?"

These days, he admits, he spends as much time watching and photographing people as he does the bears. People, like bears, are endlessly fascinating.

As the sun began to lower and clouds cleared the volcanic peak in the distance, more bears appeared along the edges of the lower river while others descended trails from the grassy bluffs. They gathered before and around us, and Aumiller counted silently with a finger, tapping the air. Fifteen now. Another great day, dancing.

Nancy Lord, one of We Alaskans' book critics, is a Homer-based writer and former Alaska writer laureate. Her books include "Fishcamp," "Beluga Days" and "Early Warming." Her novel "pH" will be out in September.