From tourist season to PFD season, Alaska gets way beyond winter, spring, summer and fall 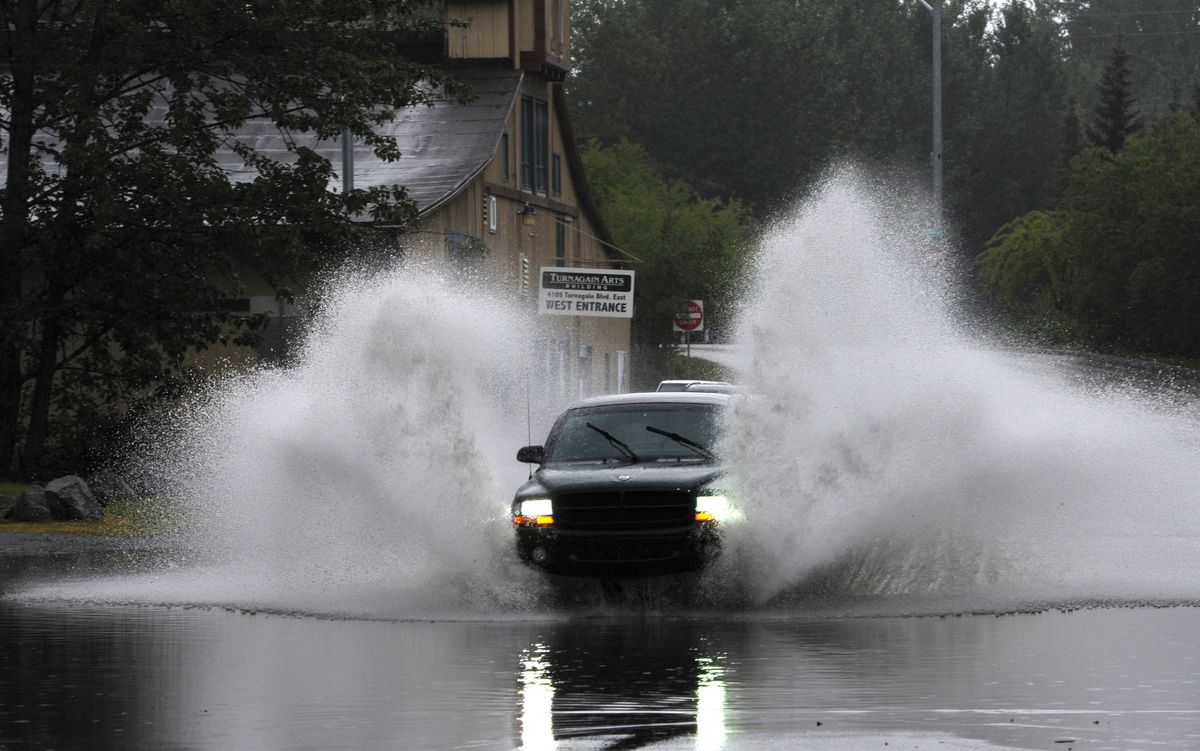 A motorist plows through a rain puddle at the intersection of East Turnagain Boulevard and Borland Drive in Spenard on Sunday evening, July 24, 2016. (Bill Roth / Alaska Dispatch News)

A motorist plows through a rain puddle at the intersection of East Turnagain Boulevard and Borland Drive in Spenard on Sunday evening, July 24, 2016. (Bill Roth / Alaska Dispatch News)

JUNEAU — They say Alaska has two seasons: winter and Construction.

While mildly funny in a T-shirt slogan-y kind of way — like, say, "If you can read this, put me back on my barstool" — what about our other seasons?

Lately, I've given this more thought. After all, late April in Alaska is conducive to few activities but thinking. Oh, and watching TV, but watching TV is the lazy man's thinking.

See, when it comes to seasons, Alaskans experience at least a baker's dozen. First, we've got the four conventional seasons — winter, spring, summer, fall — although in some years, summer is actually fall, fall is winter, winter is spring, and spring is both winter and summer on a rotating Monday-Wednesday-every-other-Friday schedule.

Then there's Rainy Season, which pretty much describes every season for a vast majority of the state, and Dry Season, which refers not to the weather, but the parchedness of everybody's skin after months indoors next to the woodstove.

And then there's Shoulder Season, where we currently find ourselves, yet again.

By "Shoulder Season," of course, I mean the seemingly endless limbo before it finally stops being winter (and then, on the other side, finally starts being winter again). Fishermen resume futzing with their gear, kids refuse to wear shoes and every store in town is selling chicken manure. But don't light those tiki torches just yet — here comes a sideways sleet storm! That's Shoulder Season.

The tension is palpable: When will it be summer? What kind of summer will it be? This has profound consequences for a place where weather calibrates an entire community's vibe, sometimes moment to moment. I mean, Alaskans can suffer Seasonal Affective Disorder year round. Sure, you may claim you're not susceptible, but that, in and of itself, is a condition known as Seasonal Affective Disorder Disorder.

Anyway, the familiar Shoulder Season uneasiness won't abate until prevailing climatic conditions sort themselves out, and who knows when that might be? Maybe tomorrow. Maybe June. Maybe — dare I even give it voice — 2018.

Consider a year in which the whole summer is Shoulder Season: 40s-50s, cloudy, 50 percent chance of rain changing to 100 percent whenever you decide to chance it and just go camping anyway. This may follow a normal Alaska winter, or, like last year and the year before, a winter more like Shoulder Season itself.

Or how about when the entire year is one long Shoulder Season?

You know,  I'm not even sure why they call it Shoulder Season. If we're going for true anatomical verisimilitude, I've got a much better name: "Perineum Season." What? Perineum. Go ahead and Google it. Or, better yet, sit in on a childbirth class. They love talking about perineums in there — or is the plural form "perinea"? Incidentally, is it just me, or are some people a little too comfortable discussing perinea in public?

Anyway, like the perineum — or "taint," to use a modern colloquialism — the current season can't make up its mind either. In other words, 'tain't (sic) one thing, but 'tain't the other (sic). Of course, a perineum tends not to be quite as cold and damp, at least not unless you're sitting out in a skiff and forgot your rain pants.

So, that totals 12 seasons beyond winter and Construction. Oh! — and let's not forget the season immediately following Construction Season: "Holy (Bleep) I Better Finish This Construction" Season, when the desire is not to build, fix or improve, but simply draw any kind of satisfactory close to the surprisingly complicated, time-consuming and expensive project that seemed so oh-so-easy back when you sketched it out.

And you're racing to finish before the season changes again, and you're probably slated to help a bunch of other people with their Holy (Bleep) Season projects.

Unless, of course, the sun comes out. Then all bets are off for doing anything.

Geoff Kirsch is a Juneau-based writer and humorist currently working on an essay collection based upon his long-running column in the Juneau Empire.