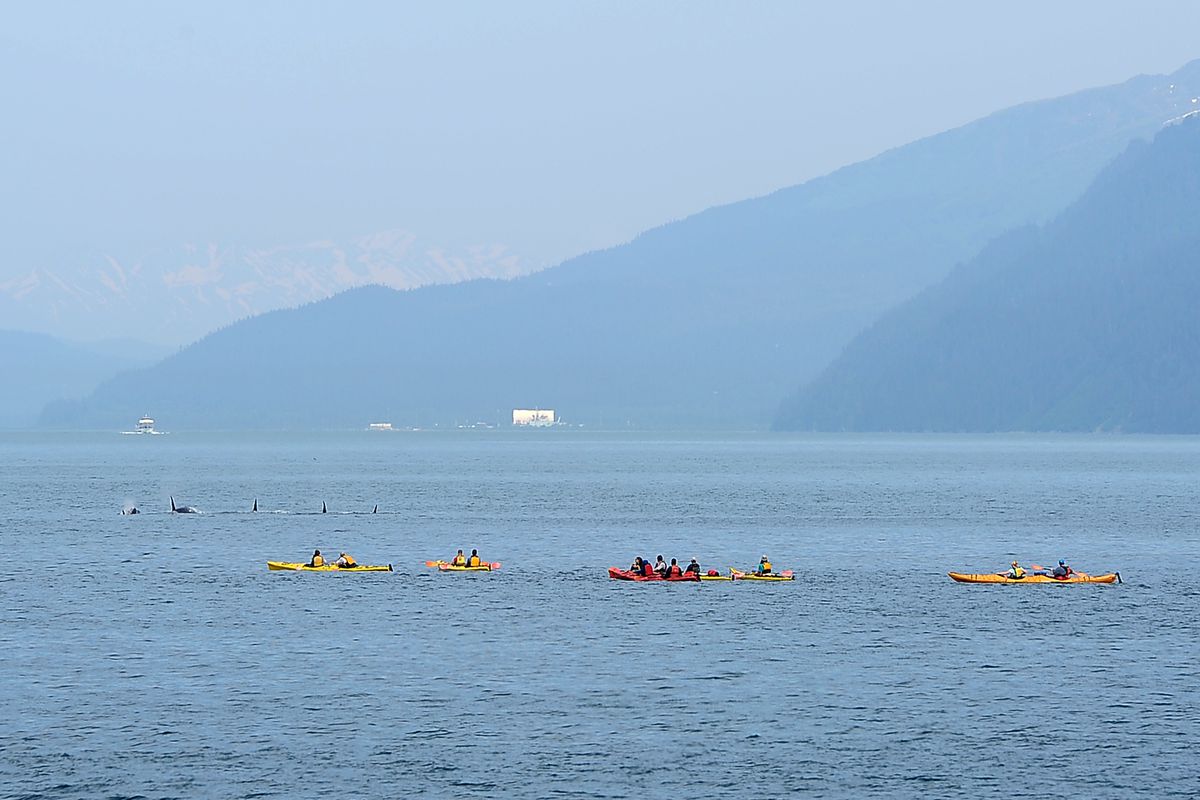 SEWARD — The low-pressure system has blown out overnight. Our group of Outward Bound sea-kayaking students devours a big breakfast of oatmeal. Along with the cleansing wind, strong surf has come up. With 5-foot breakers crashing onto Harris Bay's Long Beach, we brief the students on surf launching. A small lagoon in the lee of a spit lets us sit in our kayaks and get prepared before heading out. I lead, to demonstrate, synchronizing my strokes with the incoming waves to avoid a drubbing as they barrel down.

From the "green zone," a calmer area offshore, I watch Chris, then Brett battle up and over steep seas. The heaving water dwarfs their kayaks, and I realize that the waves have grown big and threatening.

We dallied too long breaking camp.

My co-instructor Josh signals from shore. He is out of his kayak, looking sheepish and wet. Avoiding the breakers' pull, I paddle close enough to hear him over the ruckus and learn that he got caught off guard and flipped — my turn to chuckle.

He thinks we should abort the launch or at least look for a better place. With paddle signals, he coaches the students already afloat for their approach to the beach. The landings need to be quick and perfectly timed to the sea's rhythm. Brett hesitates to exit and pull up his kayak before the next punch arrives; he gets trapped in the seething backwash, broaches and swims. Chris and I land smoothly as gulls on a storm-battered crag.

While we scout for another launch site, two sea lions play near shore. They mount the big rollers seemingly without effort and shoot down the opaque wave faces, sleek and shiny torpedoes. We are klutzes in our plastic shells next to these animals streamlined by currents and tides. For good measure, an explosive harrumph accentuates the waves' thumping. We scan the green zone, where a mist spout marks a humpback whale close by. It must be patrolling the estuary's nutritious outflow, which attracts salmon and smaller feeders. We watch it dive shallowly and surface repeatedly, each time with an aerosol puff. Arching its back and waving its fluke in glinting slow motion, it eventually sounds, headed for the open sea.

We find a place farther down the beach to push off the students one by one, timed to the wave sets. Giving the mid-bay shoals a wide berth we float above forests of bull kelp into quiet Northwestern Lagoon. Fish explode from the water around us; primed by the previous encounter and fooled by the grand scale of things, the mind mistakes their splashing for vapor from the blowholes of distant whales. Waves from our kayaks' bows fracture the light into myriad facets, shattering mirror forests, glaciers and fjords. Shedding gravity as if in an out-of-body experience, we soar through liquid space. Seesawing paddles flash in the sun like heliographs that signal bliss! With each stroke, my boat rocks on its keel like a cradle, from starboard to port and back. Push — pull — glide. Push — pull — glide … I pause for split seconds between strokes to anticipate the water's resistance against my paddle blades and to better enjoy coasting. With my knees braced under the deck, I work my arms and upper body as levers of a well-oiled machine. Soon, the rhythm becomes hypnotic, and I enter "the zone" where ego dissolves, and like the sea lions' play, movement is fluid and purposeful. The kayak has grown into an extension of my body.

Not everybody reaches a trancelike state paddling. Our biggest student, Jake, rides in the double, as he has every day, because he feels unbalanced in a single and cramped in its smaller cockpit. Forced to synchronize his strokes as the back-man, he is focusing on his partner, which takes his mind off capsizing.

The last two days are finals for the students. They get to run the show. It's their turn to demonstrate what they have learned. Josh and I will intervene only if things become risky. The group wants to explore Northwestern Glacier, recessed deep into the head of the bay. Bleak, bare and imposing, Striation Island guards the access, its granite flanks shot through with the quartzite veins that suggested its name.

We look in vain for a place to land for a hike. As recently as the 1950s, the glacier held the island in an icy embrace, but since then has shrunk, like so many in Alaska and elsewhere. Our captain decides that the forbidding shore is unsafe and changes course. The navigators keep the pod close together and far enough from the fjord's walls to avoid ice chunks that could carom off a hanging glacier.

We tack between jumbled facades from Redstone to Ogive to Anchor, each one resplendent alabaster and azure. At this point we have almost become inured to beauty, suffering sensory overload. Nearly two weeks' worth of scents, sounds, images, thoughts and conversations swarms in our heads like schools of sparkling smelt. It will take months or longer for the students to fully absorb the experience. It will have little impact on some. For others, it will be transformative, opening new perspectives. Some will never comprehend their role in all this. Others will follow invisible wakes and forever remember that the sea shifts in their bodies, too.

Michael Engelhard is the author of the essay collection, "American Wild: Explorations from the Grand Canyon to the Arctic Ocean," and of "Ice Bear: The Cultural History of an Arctic Icon." He lives in Fairbanks and works as a wilderness guide in the Arctic.