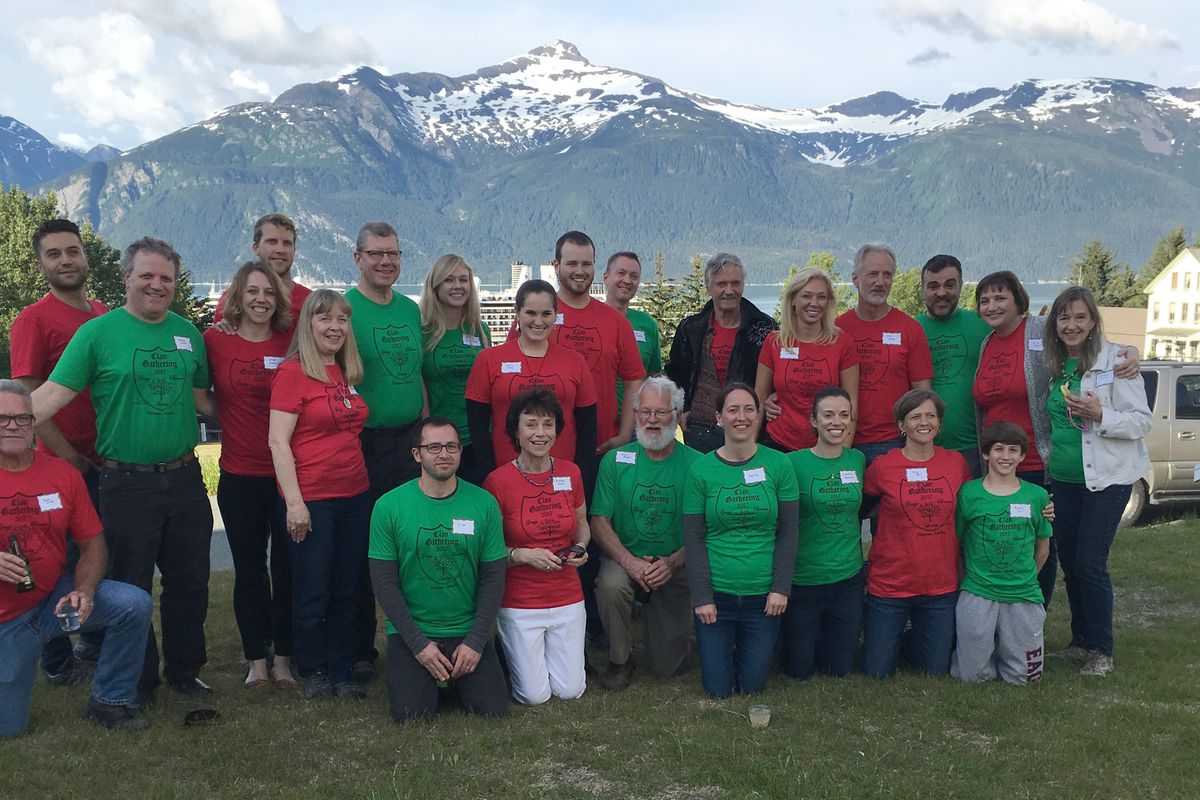 Gregg family picture. Allan Gregg is fourth from the right in the second row, with the gray beard and red shirt, and Katie is the blonde in the red shirt next to him. (Heather Lende)

Gregg family picture. Allan Gregg is fourth from the right in the second row, with the gray beard and red shirt, and Katie is the blonde in the red shirt next to him. (Heather Lende)

HAINES — "Mimi's Summer Serenade," featuring a special guest opera singer, a local pianist and a Juneau violinist, was a highlight of June's Gregg family reunion, and a tribute to the matriarch of the clan — Haines' grand dame of the performing arts, Mimi Gregg, who died at age 92 in 2008.

Mimi loved opera and musical theater. Her mother, Regina Viccarino, was an opera diva who arrived in Haines with Mimi and her young family in 1947. "Madam Vic," as she was known, nicknamed her only child Mimi after the heroine in Puccini's "La Boheme."

When I was a young mother, I watched videos of the Metropolitan Opera with Mimi on winter Sunday afternoons. She printed librettos and did her best to translate the story, which was in Italian or German or whatever, before the show began. But once the curtain came up, she told me to ignore her cheat sheets and allow the music to make me "laugh and cry."

That was not a problem at this concert.

The guest singer, Katie Saunders, was the 49-year-old granddaughter Mimi never knew she had. Unbeknownst to the family until recently, the story is that Mimi's youngest son Allan was a freshman at the Air Force Academy when his Haines High sweetheart learned she was pregnant, moved to Ohio with her mother, and gave the baby up for adoption to an Indiana farm couple.

They were not musical, but little Katie loved to sing, and when she saw "Amadeus" as a teenager, it set her course in life toward a career in opera and musical theater. She earned a music scholarship to college and interned with the San Francisco Opera before performing for decades in European opera houses and theaters. She was often asked if she was Scandinavian because of her gray-green eyes and blonde hair, and when her 24-year-old daughter nudged her to find out more about her history, with help from Ancestry.com, she took a DNA spit test and discovered a 99 percent genetic match with a woman from Spokane.

"She asked who I was," Katie said, "and I said, 'I don't know. I was adopted.' " A previous search for her biological mother had come up blank, but she did know that her father was Alaskan, had attended the Air Force Academy, and had siblings who studied art in college. "She said, 'That sounds like my cousin,' " Katie said. Allan Gregg, now 68 and divorced, took a DNA test that confirmed his paternity.

He's a private pilot who flew to Haines from his home in Michigan for the festivities. She loves planes, always had a yen to be a pilot and is taking flying lessons. They like the same food and movies. They say their shared interests and tastes are "weird" and "surreal." And neither can stop smiling because they are so much alike.

The rest of the ever-theatrical Greggs happily embraced their very own diva.

Thanks to my adult children and now grandchildren, I think more than I used to about the immortality of family traits. I will catch a flash of my mother, who died before she met them, in their eyes, and hear her when one plays the piano.

My mother gave us the studio grand to ensure her grandchildren would have the opportunity to learn to love playing it, as she did.

After a childhood of lessons, the one grandchild in five who still plays is our adopted daughter, now a married mother of two little girls. She's been slightly curious about this story and said "maybe" she will take a DNA test when I suggested one. But she's not sure. "I'm happy where I'm at."

How much of our character and talent are we born with, and how much do we acquire by fate, luck or desire from the home where we are reared and the community in which we live? Katie Saunders says she believes the nature-to-nurture ratio is 80:20. My daughter believes it's the opposite. I think it's closer to 50:50. But who knows? So much depends on the way we incline our hearts, doesn't it? And so much is beyond our control. No one is self-made.

At a party on a sunny June night up on the lawn of the old Fort Seward home that Mimi and I watched opera in, her family poses for a group photo. A rainbow has appeared above the mountains and the inlet.

I know for sure that Haines is the one place in the world where I belong completely, and that this sense of gratitude and well-being isn't genetic. ("At least you think you do," my mother would say.)

It wasn't until near the end of the concert, when Katie performed a show tune — "Think of Me" from "Phantom of the Opera" — that I felt what Mimi tried to teach me.

"Think of all the things we've shared and seen. Don't think about the way things might have been," Katie sang, to Mimi it seemed. Or maybe to the mother she knows and the one she doesn't.

Then, in that dark theater I held my husband's hand and cried opera tears. And when she took a final bow, I wiped my cheeks, leaped up and applauded like crazy with everyone else.