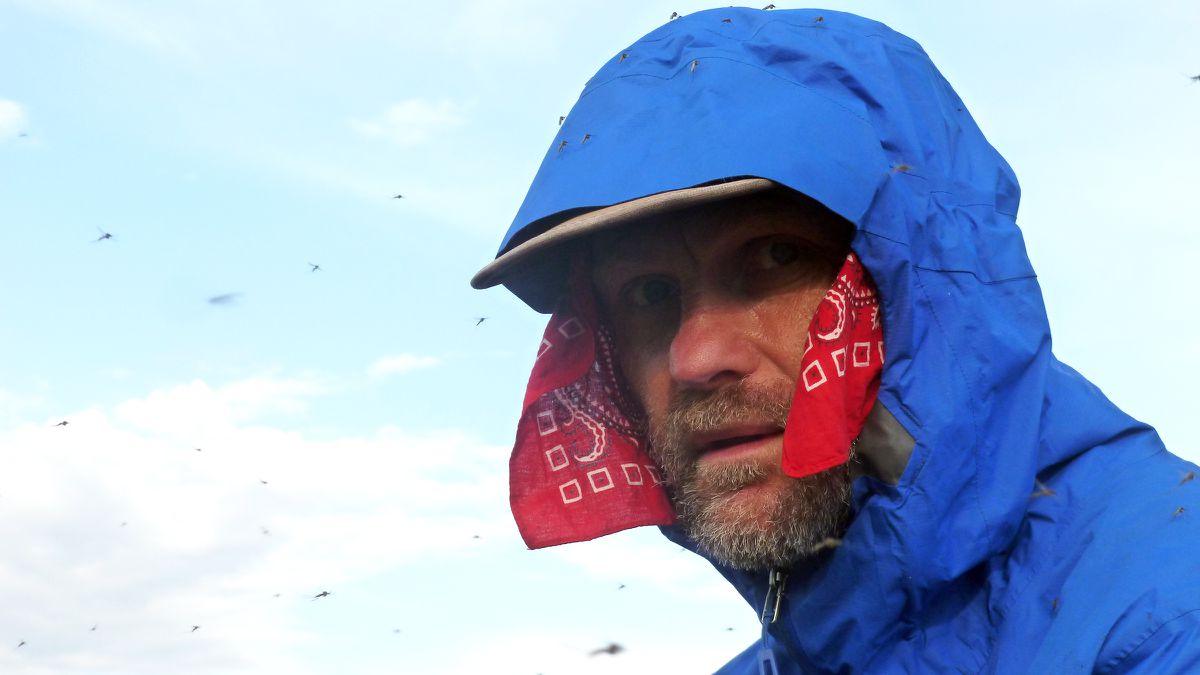 JOHN RIVER — At these high latitudes, where a long tradition of Native storytelling attempts to explain the world — and alleviate the long nights of much of the year — people remember how mosquitoes first came to be.

According to one Inupiaq myth, a long time ago a man stabbed a cannibal monster after learning about its Achilles' heel. "Though I'm dying," the ogre warned, "I'll keep on eating you and all other humans forever." Unfazed, the man cut the body into pieces, which he burned in a fire. But when he tossed the ashes into the air, each flake became a mosquito.

The single-strike kill record on this trip to the northern part of Alaska stands at 34 mosquitoes. I've compromised my Buddhist leanings enough now to cheer at the sound of one hand slapping. This is nothing but good-old-fashioned eye-for-an-eye revenge, an atavistic vendetta with the divine: "He sent among them swarms of flies, which devoured them" (Psalm 78:45).

Over a claustrophobic dinner last night — despite clear blue skies, my brother, sister-in-law and I huddled inside one pup tent — I wondered aloud what the beasties eat when we're not around. "Caribou," my brother said. He's right: Mosquitoes can siphon a quart of blood per week from a hapless ungulate. Supposedly, people find carcasses "exsanguinated" —  that is bled out in the scientists' lingo. How many backpackers in that condition have been found?

Only females suck, to produce eggs. Currently, their famished hordes are hitting the tent in a steady pitter-patter, like rain. They must be desperate, as the only other wildlife we've encountered on this weeklong trek was a lone bull caribou, chased into a lake by a grizzly — just after the floatplane had landed and taxied to shore and we unloaded our gear. At the lake, my brother assembled his rod and reel, catching for trout for dinner.

"You might want to put on some bug dope, or better yet, gloves and a hat," I'd said.

We ended up having good old mac 'n' cheese without fish inside my brother and sister-in-law's roomy honeymoon suite. My brother's hands were almost too swollen to hold a spoon. His usually gaunt face looked puffy and flushed, and I bet he was running a temperature.

I feel sorry too for my sister-in-law, as this is their honeymoon. I've agreed to guide her and my brother from that nameless lake in Alaska's Brooks Range to the John River because I know the region from my fieldwork. I try to boost morale, telling them, "At least we are spared botflies and warble flies, whose larvae digest the tissue of nasal passages and emerge from the backs of living caribou."

We've only got 60-some miles to go, but distance north of the Arctic Circle is more accurately measured in ounces of sweat and blood. Boots are forever soaked in this marshy terrain. Mop-headed, knee-high humps of vegetation interspersed with mud pockets — the cursed "tussocks" — make backpacking here a contact sport. Only surface layers of soil thaw under the 24/7 stare of the midsummer sun. Because the deep permafrost never melts, water pools on the tundra with nowhere to drain, creating perfect breeding grounds for the beasts. Each step pushes voracious clouds up from the tussocks. Atop this gigantic sponge, we barely find enough level, dry ground to pitch our tents.

We wander about like crazed, burdened beekeepers, sealed in protective rain gear, gaiters, gloves, head nets and hats, with temperatures approaching 90 degrees Fahrenheit. Our secret weapon was meant to be an insect repellent that contains Deet, a chemical compound the U.S. Army developed after the Pacific War. Its side effects can include hallucinations, insomnia, mood disturbances and seizures, which could end in death. It's probably a byproduct of DDT or Agent Orange. People with Ph.D.s invented this "Jungle Juice," but even though it dissolves plastic zippers and leather, the bugs seem to like it. Possibly worse, there is no kissing with this bitter stuff on; hoping to have healthy offspring and dreading the chemical's side effects, the newlyweds so far have stayed chaste.

Koyukon old-timers have told me that they carried cans of smoldering tree fungus in the bottom of their canoes to ward off mosquitoes. But there's no tree fungus to be found here, because there are no trees.

Make no mistake: These are not your garden-variety mosquitoes. They rank among the fiercest of the 176 species of mosquitoes found in the U.S. They drive breeding birds from their nests and then clump onto their naked feet until the birds look like they're wearing fur slippers.

At some point, my sister-in-law drops her pack, sits on a hummock and breaks into tears. We are out of Deet. Beyond my head net, the enemy is whining.

Scratching my bites till they're raw, I try to remember the good in these pests. Like bears, the largest predators on the tundra, the smallest ones keep us humble. They remind us that we are still part of the food chain, and not necessarily at the top. In a beautiful democracy of predation, mosquitoes feed on grizzlies as well as on us; their pond-born larvae — myriad wriggling question marks — in turn sustain thousands of shorebirds and their chicks.

And if it weren't for them, the North would be swarming with people.

Then it hits me, like a Zen teacher's cane:

Enlightenment lies in the most mundane things.

Michael Engelhard is the author of the essay collection, "American Wild: Explorations from the Grand Canyon to the Arctic Ocean," and of "Ice Bear: The Cultural History of an Arctic Icon." He lives in Fairbanks, Alaska, and works as a wilderness guide in the Arctic.