In Haines, outwitted by wily crows 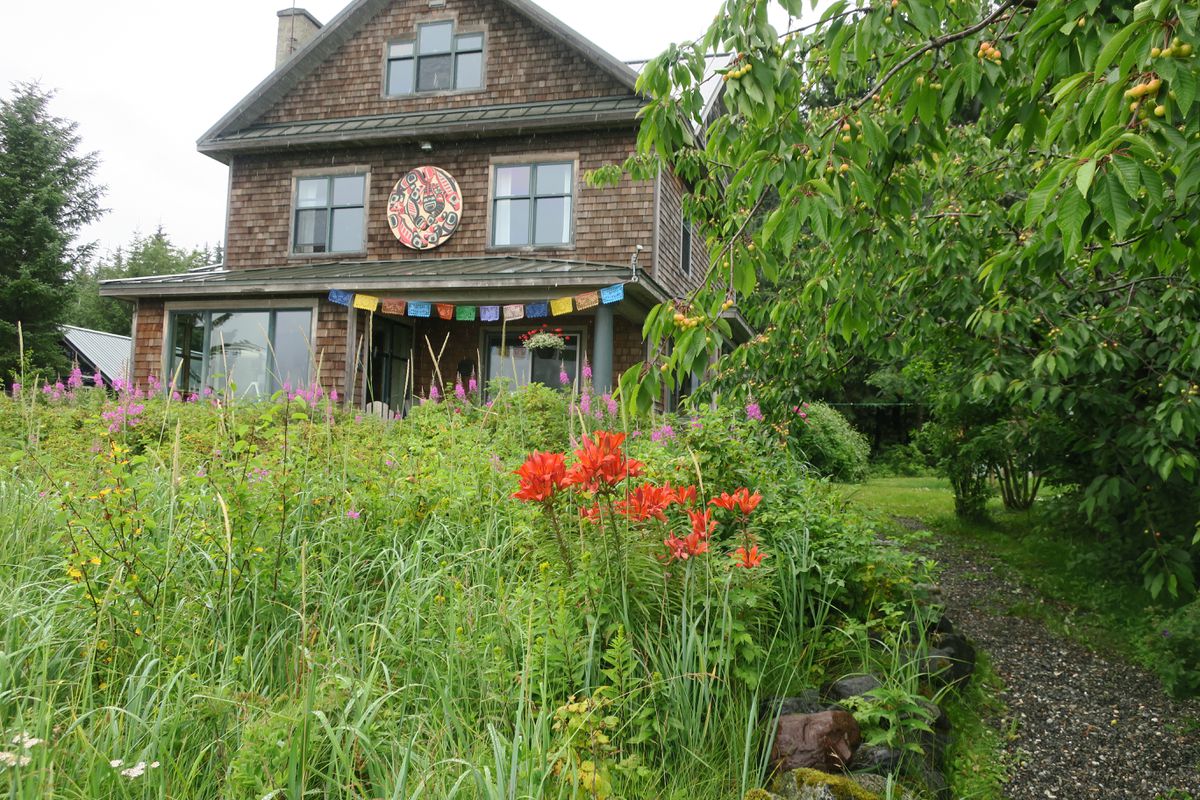 Crows have zeroed in on the cherry trees in the yard of Haines author Heather Lende. (Heather Lende)

Crows have zeroed in on the cherry trees in the yard of Haines author Heather Lende. (Heather Lende)

HAINES — My friend Joanne phoned from her truck. She was nearby and wondering if I was doing anything. It was almost noon on Monday. An assignment was due by the end of the day. I had also promised my daughter, whose husband is a commercial fisherman and gone for two weeks during this salmon gillnet opener, that I'd watch her children at 4 p.m. so she could go running.

The fishing has been very good. Although the skippers and crews keep their cards close to their chests, my son-in-law did say that he's never had sets this large in his life. One sank his net.

I had written two obituaries last week for the local paper, and once again was reminded to make time for people I love.

"Come on over," I told Joanne.

The news has not been as good for sport and subsistence fishers like her. King salmon are barely returning to the Chilkat River. The derby was canceled, and Fish and Game has kept subsistence nets out of the river for another week to allow more kings to escape and spawn. "I don't even have the prop on my boat," Joanne said, sipping freshly brewed coffee on my deck with her cocker spaniel in her lap.

It wasn't raining or too cold, and since we haven't seen the sun in days, the low clouds and gray sky felt almost pleasant. Especially compared with the weekend deluge.

"When is summer going to get here?" Joanne asked.

She pointed to a crow in my cherry trees. I tossed a handful of pebbles and hollered "git!"

The crow flew about 50 feet and landed with his buddies on the beach where they huddled to strategize the next assault. I gathered another handful of pebbles from the garden path and returned to the damp cedar chair.

"Last week I put four, 14-foot-square nets in the branches," I told Joanne.

She could hardly tell. Nor, apparently, can the crows. I hoped they would be deterred by the partial blockade, or at least confused enough to avoid my trees.

Two crows bounce-landed on a high branch and each stole a green and pink cherry before I flung more pebbles. Joanne's spaniel didn't bark. My retriever chased the arc of the flying pebbles but ignored their target.

We kept one eye on the trees, and talked about the new preschool building going up adjacent to the senior center, zoning, marriage, and the Southeast Alaska State Fair, which is right around the corner. If my cherries are ripe they may win a prize — that is, if there are any left by then.

I chucked a handful of pebbles and the crows practically laughed.

"I can't shoot crows in front of the grandchildren," I said. I've read that crows mourn the death of their own and they make friendships for life. I saw a video of a crow using a tool to open a gate. "I'm not sure I can kill one at all. They are super smart."

"I know what you mean. Last year I caught a baby crow in my cherries. Before I released it, I whispered, 'You stay out of my trees, you hear me?' " Joanne said.

I have heard the neighborhood crows mimic a baby crying and a cat meowing.

Which reminds me that I need to feed the cat that belongs to my neighbor. She fell on July 4 between the Friends of the Library used book sale and the rainy picnic in the park. Ambulance crew volunteers were right there, and along with the clinic staff, they were so kind and caring that even though it was a holiday, they didn't so much as hint that there was any place they'd rather be than helping her. I hopped on the medevac plane to Juneau with her, as she has no family here. As we cruised low under the clouds and just above the fishing boats on Lynn Canal, she said, "Be sure to remind me about the gun. It may still be loaded."

I told her she probably shouldn't mention a gun on a plane. The flight nurse raised his eyebrows and continued filling out paperwork.

My neighbor said she had shot at some squirrels in her bird feeders that morning. The nurse asked how old she was.

"And you were shooting at squirrels?"

"Someone has to," she said, and shrugged.

Now, Joanne said, "What are you going to write about?"

"Something nice about this summer so far. Any ideas?"

She ruled out the weather and politics. (There is a recall election for three Haines Assembly members on Aug. 15, including me. It's been hard.)

Five crows dive-bombed the trees. I chucked the last of my pile of pebbles in their direction.

I could really use a pellet gun. But what if I accidentally kill a crow, and separate old friends or longtime flock-mates, forever? Besides, if the sun ever comes out, there will be plenty of cherries to go around.

Joanne said she'd better be going so I can head back to work. Then she gave me a hug.

She knows me well enough to know I'm not a big hugger, but that I want to be. She said she was glad that my neighbor was on the mend, and that I had been there when she needed me.

Later, I wished I'd been brave enough to thank her for both the hug, and for showing up when I needed her, too.

Haines author Heather Lende's third book is "Find the Good." Check her blog or her Facebook page for the latest from her town.