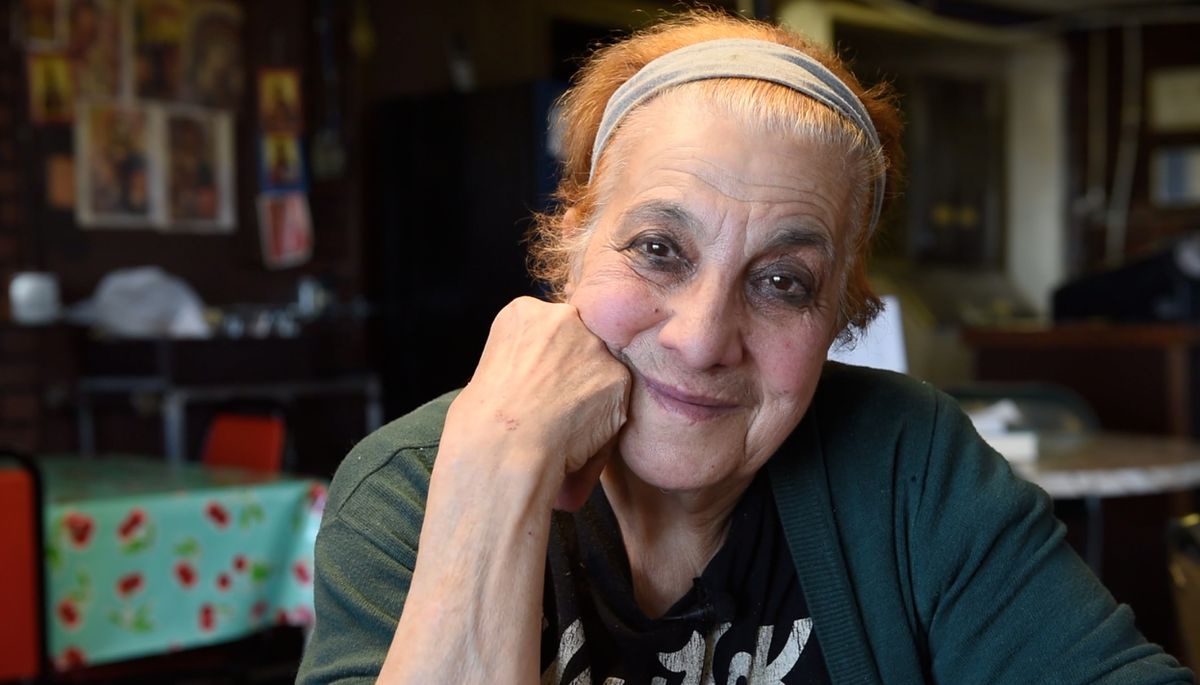 Maro Kargas was the beloved owner and chef at Dimitri’s Restaurant in Bethel. This portrait was taken in October 2016 during an interview in which Maro reflected on nearly 40 years of feeding her Yukon-Kuskokwim Delta patrons Greek food. Maro passed away in Cyprus, surrounded by family, earlier this summer. (Katie Basile / KYUK Public Media)

Maro Kargas was the beloved owner and chef at Dimitri’s Restaurant in Bethel. This portrait was taken in October 2016 during an interview in which Maro reflected on nearly 40 years of feeding her Yukon-Kuskokwim Delta patrons Greek food. Maro passed away in Cyprus, surrounded by family, earlier this summer. (Katie Basile / KYUK Public Media)

BETHEL — Her last name was Kargas, but I suspect many people here did not know it.  She was simply Maro, a woman as distinctive as her name.

She arrived in Bethel in 1980 with husband Kyri and three children, Litsa, Noni and little Demetri. She was the cook for Pizza Pete, as we called him, in his newly opened restaurant. Those first months she nearly killed us with an enormous lunch buffet. We gorged ourselves on Greek and Mediterranean dishes hitherto unknown to our rural Alaska palates — moussaka, pastitsio, spanakopita, chicken cacciatore, roasted lamb, rice pilaf, stuffed grape leaves.

Try as I might to eat with restraint, the tastes and textures seduced me into gluttony. By 1:30 p.m., I would be slumped over the mounds of paperwork on my desk, snoozing with small flakes of filo from the baklava resting in the corner of my mouth.

Maro was a lean, dark beauty. She moved gracefully and purposefully. Her low voice and thick accent made her even more mysterious. She seemed shy, and in those early days, I could not have pictured her as an obstreperous girl in Cyprus who hated sitting in school all day — a girl who would steal away to the beach to spend all day swimming and exploring the glorious treasures of tide pools.

"But whatever did you eat?" I asked her, knowing she would not have dared go home to eat while playing hooky.

"Oh, we ate sea urchin — my favorite," she replied.

"Did you cook it on the beach?"

"Oh no, we just split them open and ate them raw," she said.

‘I don’t think with an accent’

In short order, Maro decided to open her own restaurant. They leased the old pilots' quarters on Front Street owned by Rosie Porter. The family lived upstairs and they renovated the downstairs for the restaurant. The whole building was no more than 1,400 square feet, but it worked out well for everybody because the price was right.

When Maro approached the local banker for an equipment loan, he asked her to bring her husband into the bank. Offended by the banker's request, Maro felt he was questioning her competency.

"Listen," she informed the banker while gesturing with pointed finger, "I may spake with an accent, but I don't think with an accent!"

And so it was that Demetri, who was only about 3 years old, darted about the restaurant delighting in whatever games he played (most of us were shot numerous times) with whoever's feet he found under each table.

The girls grew into beautiful young women as our town became accustomed to pairing the days of the week with Maro's homemade soups. Who can forget Wednesday was chicken lemon rice? ("Avgolemono" in Greek, but she never made us say it.)

The family outgrew the first restaurant. By the mid-1980s, Maro mustered her resources to create another one.

But nothing suffered in a larger venue. Once when Kyri, her husband, was away and Maro's dishwasher was in jail, I attempted to help her by slicing tomatoes for the lunch rush. She stopped me and demonstrated how she took each burger off the grill, cut a slice of fresh tomato, cut a slice of onion, put it on the toasted bun with the lettuce, and handed it off to Katie, the waitress.

"What? You think my customers want an old tomato?" she practically screamed. I recalled her cook's assistant had simply disappeared after he suggested she make the lasagna ahead of time and freeze each portion. It was clear that I had been demoted to the job of dishwasher.

I learned from Maro that the small things, even in the most ordinary dish, made the difference between mediocre and delicious.

As the years went by, Maro spent part of the winter in Cyprus, tending her olive trees. Each year before her departure, a flurry of devoted customers procured jars of her salad dressing and stowed away a few orders of spaghetti sauce in their freezers. As surely as the geese, she returned each spring to serve white pizza, Greek salad, chicken marsala or the Neil Scott special sub with sublime consistency.

After almost four decades in Bethel, Maro knew every customer by name, whether they liked extra tzatziki sauce on their gyro, preferred a meat or vegetable calzone, and which dishes were personal favorites. She made time to call Kurt Kuhne whenever she had split pea soup.

She not only cared about what her customers ate, she cared about their children, their sick mothers, their stressful jobs, their diabetes. Although she did not make soup "to go," she frequently slipped a generous portion of soup to a spouse or friend for Angie or George or whoever was sick, saying, "Take it, she loves the lentil."

She found joy in our births, graduations, promotions, and weddings, and sadness in all our losses. Dimitri's Restaurant was a culture of caring, a place where single guys like Jimmy Kohl found a second home. A place where Litsa, Litsa's daughter Sundi, Nikki, Laura and a host of other local ladies who waitressed made sure everybody got their turn with equal attention to their orders. And at the heart of it all was Maro.

But this spring, she did not return from Cyprus, and the restaurant stands shuttered and empty. On July 5, her family sent word of her passing.

Yesterday, in a fit of nostalgia, I texted Kurt Kuhne, who had studied many of her dishes, "How did she make her meatballs?"

I remembered the failed attempts my daughter Rosie and I had re-creating her spinach rice and thought, "Oh, they wouldn't taste the same anyway." Maro didn't use recipes, and I never seemed to get it quite right, even when I watched her — those many small things made all the difference.

Maro Kargas is survived by her children, their spouses, her grandchildren, her siblings, and about 6,000 grieving Bethelites, not including frequent visitors from other towns.

R.I.P. Maro, and "May There Be No Flies on Your Fish!" (Greek saying we learned from Maro.)

This story was republished with permission from KYUK.org.

Vicki T. Malone a lifelong Alaskan who lives in Bethel and writes when she is not cooking.