Beyond the bears: Appreciating other Brooks Camp attractions in Katmai 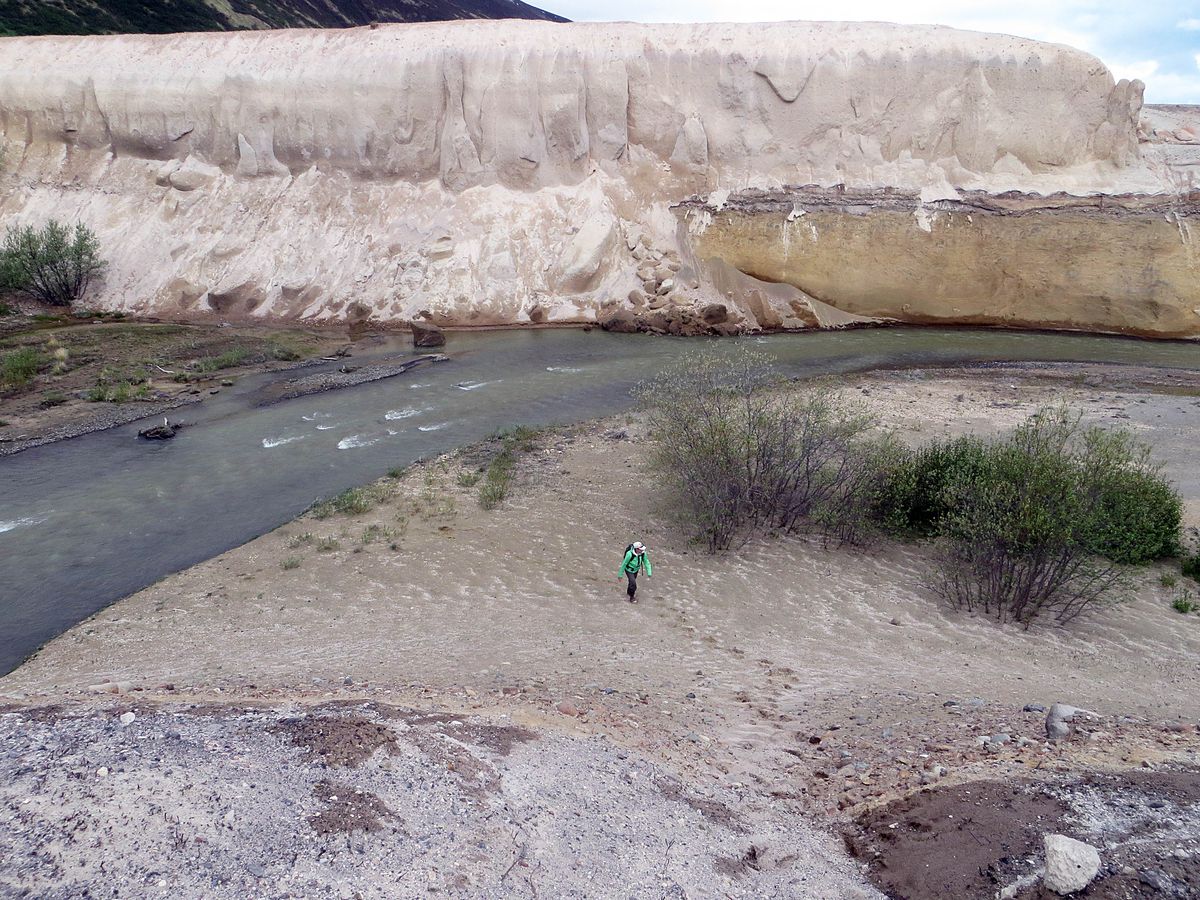 BROOKS RIVER — A brown bear sow emerged from the alder fringes of the Naknek Lake shoreline, ambled to the water's edge and dropped in a huge blond lump onto pumice pebbles and damp black volcanic sand. Through long lenses, we could see her body pulse with breath; otherwise, she did not move.

Barely visible back in the brush, her three yearling cubs munched grass stems, explored the tangle of alder limbs and jostled each other.

Nearly 200 yards away, we stood with other campers on the lakeshore near the Brooks Camp visitor center, swatted at aggressive gnats and watched impatiently. Our companions pointed camera phones at the tired mother bear. When her cubs crept hesitantly from the foliage to the lake, excitement intensified. Digital shutters clicked. Lenses zoomed. Gnats gained the upper hand.

The sow indulged her babies briefly before rising and drawing a long drink from the lake before leading the cubs back to the safety of the woods. The show was over. Human denizens tromped back to the lodge to compare observations and share images on small LED screens.

It was early June, and in a week or so, the sow and her offspring would join dozens of other bears — and hundreds of other campers — at the Brooks River for the start of the annual salmon spawning migration.

Without a doubt, the marquee attraction at Brooks Camp in Katmai National Park and Preserve is the concentration of brown bears snatching and feeding on sockeye salmon attempting to surmount Brooks Falls. Bears stare from the covers of books and films about the park. Bears and salmon adorn T-shirts and hats, drinking glasses and postcards, refrigerator magnets and collector's pins sold at the visitor center and the Brooks Camp gift shop. One of the first rangers to greet visitors upon their arrival at Brooks Camp delivers a mandatory bear-safety class.

Although Brooks Camp was established in 1950 because of the popularity of its rainbow trout fishery — and sportfishing still reigns in the whole of the park — it is now the bears most people come to see.

I, too, wanted to see bears, but I had broader expectations. The red salmon had not even begun ascending the Brooks River, so I knew bear sightings would be hit and miss. Fortunately, Brooks Camp offers numerous opportunities beyond the big bruins.

Yvonne Leutwyler and I had accompanied the Walatka Group to Katmai country. The group is named for John Walatka, who helped build Brooks Camp and was one of the men associated with Northern Consolidated Airlines, the original park concessionaire.

Heading our group were Walatka's daughter and son, Johanna (Walatka) Bouker and Fred Walatka, along with many of their children, grandchildren and family friends. We had befriended Johanna and her husband, David Bouker, while living in Dillingham.

On our first full day in camp, we headed up Dumpling Mountain, a 2,440-foot lump of stone, brush and tundra separating Brooks Lake from the immense main body of Naknek Lake. Thousands of years ago, geologists say, the two lakes were one because the water level of Naknek Lake was much higher. As the Naknek River carved through glacial moraines on its way to Bristol Bay, the lake level dropped, and Brooks River and its falls were formed.

At the end of a moderately strenuous hike, the table-like summit of Dumpling Mountain affords a 360-degree view of both lakes and the surrounding mountains and valleys. It's also a great way to get one's bearings and sense of how the countryside fits together.

The next morning after breakfast, about 20 of us pounded across the floating bridge separating the two banks of the Brooks River and congregated next to a white 28-passenger, custom-built tour bus, the 10th transportation iteration since 1963, when the National Park Service opened a snaking 23-mile, narrow gravel road from Brooks Camp to the Valley of Ten Thousand Smokes.

Seventy-six-year-old Johanna Bouker, who first came to Brooks Camp 66 years earlier, was along for the tour, and she informed the rest of us that decades ago the three stream crossings our bus would make had all been given satirical nicknames: First was "Model T" because it was an early Ford; second was "Edsel" because it was the briefest Ford; third was "Cadillac" because it was wide and a person could barely a-Ford it.

Casey, our driver, shifted into low gear for the crossings and expertly guided the bus down the narrow passageway and through a series of sweeping hairpin turns.

Our tour leader, ranger Rebecca, made a game out of watching for wildlife on the road while carefully pointing out landmarks and explaining geology. The Robert F. Griggs Visitor Center that stands at the end of the road sits atop a promontory called the Three Forks Overlook, providing an excellent view of the valley, with its broad, tan delta of ash carved deep by creeks and mostly barren of vegetation.

On June 6, 1912, when Novarupta blew out of the valley floor and Mount Katmai's cone collapsed, ash shot more than 20 miles skyward, then rained down to form deposits tens to hundreds of feet thick. U.S. Geological Survey explorers visiting the valley three years later found steam issuing from so many fumaroles that they christened the valley for what appeared a hellish expanse.

Now, snow-tinged peaks and volcanic cones line the valley periphery as it descends toward the visitor center, and the valley streams converge to form the Ukak River. Tour group members are invited on a 3-mile round-trip hike to the Ukak Falls, where the stream has knifed through red-orange ash to expose slabs of gray bedrock and occasional marine fossils.

Several unguided hikes into the middle and upper valley are possible, and the bus can drop off adventurers on one day and schedule a pick-up on a later date. On Novarupta's 105th birthday, Yvonne and I returned for a brief trek a few days later, wading Windy Creek and exploring the beautiful desolation along the lower part of Buttress Range.

On other days during our week at Brooks Camp, we watched huge fish trying to leap up Brooks Falls, we hiked the rocky shoreline to the broken moraine that separates the Iliuk Arm from Naknek Lake proper, and we explored the remains of "Portland Packer" Scotty's illegal trapping cabin near the shore of Brooks Lake. Scotty was arrested in the late 1930s or early '40s by game warden Carlos Carson, despite the trapper's attempts to conceal his operation and his half-buried structure.

We also visited the Cultural Site Exhibit, a reconstructed prehistoric house with interpretive displays. According to the park service, there has been at least 9,000 years of human habitation in the park, including about 5,000 years along the Brooks River.

One sunny afternoon, we joined several other campers in trekking north along the lakeshore to a small, well-protected bay called Mortuary Cove. Despite its grim moniker, the cove features a crescent of light sand, probably pulverized pumice, and good camping spots among abundant bear signs.

The cove earned its name decades ago after a group of Audubon Society scientists harvested and dissected hundreds of local bird specimens in the cove, presumably to keep their work separate from the eyes of Brooks Camp visitors attempting to enjoy nature.

But make no mistake about it: Bears, even in "off" season, are still uppermost in the minds of visitors. At 7 a.m. one morning, just as we were about to sit down to breakfast, one camper jumped to his feet and pointed out a window of the lodge. "Bears!" he exclaimed. We gathered at the glass to see a sow and a pair of 2-year-old cubs ambling down the camp trail toward the river.

The bear's sudden appearance highlighted one of the reasons I almost always have a camera with me. I bolted out the back door of the lodge and followed — at a distance prescribed by camp rules, of course. Soon, several of us were watching and photographing the bears chomping riverbank grass before swimming the stream to the far bank.

The appearance of bears animated us more than morning coffee. The lodge was buzzing with bear talk over scrambled eggs and bacon. Just the thought of bears quickens the pulse, whether that thought comes from seeing a bear-scarred tree or one of their heavily traveled paths through the woods, or from the need to holler, "Hey, bear!" repeatedly when navigating the heavy brush.

But even when the bears were ensconced in the forest or merely racing through our synapses, Brooks Camp kept us engaged and fascinated. And the camp itself is but a small portion of Katmai National Park and Preserve's 6,400 square miles of land and water.

Clark Fair is a lifelong Alaskan now living in Homer.