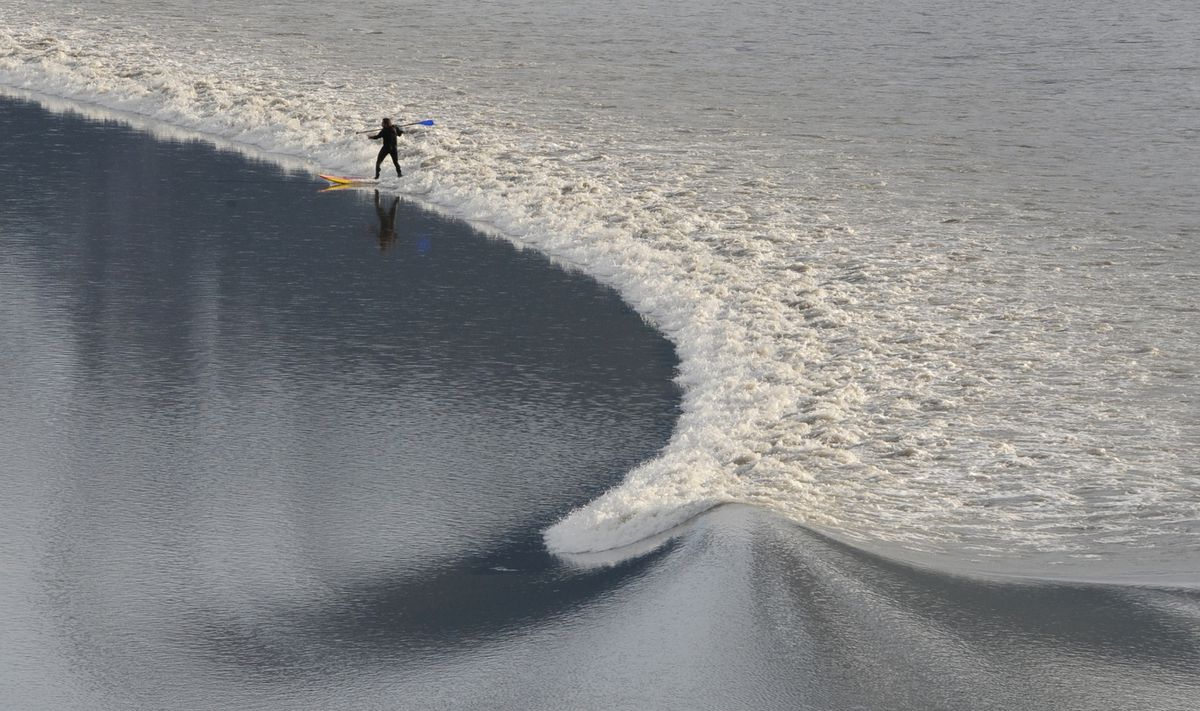 Tides: The Science and Spirit of the Ocean

Those of us who live along or near Alaska's coastline are well aware of the tides that rise and fall each day. Many of our lives are ruled by tides, which influence when and where we fish or gather mussels or beach coal, when we travel on beaches, when we launch or work on boats, or when we watch for shorebirds or beluga whales. Those of us who live along Cook Inlet know that our tidal range is among the greatest in the world — and that Turnagain Arm's bore tide is a marvel to witness.

Who doesn't keep a tide table handy and reference it regularly?

But who among us understands tides well enough to say more about them than that it's the moon that pulls them and that the biggest tides come with the full and new moons?

To explain and enthrall us, Jonathan White — a sailor, surfer, marine conservationist and exceptional researcher and writer — offers a captivating examination of all things tidal. In "Tides: The Science and Spirit of the Ocean," White takes us on a journey around the world, to experience the most interesting tidal phenomenon and consult ocean experts. He interweaves around his adventures fascinating historical and scientific information about tides and the ways humans have interpreted and responded to them through millennia.

We learn what influences tides — not just the gravitational pull of celestial bodies but winds and storms, barometric pressure, the sizes and shapes of water bodies and something known as "resonance." There are, in fact, some 400 tide-generating constituents, although only 12 make most of the difference. There are also, still, numerous mysteries to be explored.

The book begins in Alaska, where nearly 30 years ago White's wooden schooner went aground on a large tide in Kalinin Bay, near Sitka, and was nearly lost. Thus began his quest to learn everything he could about tides.

Canada's Bay of Fundy is similar to Cook Inlet with its large tides and mudflats. There, White joins a biologist to learn about what lives in the mudflats — mostly tiny amphipods known as mudshrimp, essential food for migrating shorebirds. Much of what's known about the Bay of Fundy's biology is a result of studies related to developing tidal power. The technology proposed in the 1970s involved a barrage, or dam, that would allow a basin to fill on a rising tide and then would produce power when gates were opened and water flowed back out through turbines. In the end, the studies showed that changes in the tide dynamics would be detrimental to the environment — and that the barrages would silt up very quickly.

White's other story from eastern Canada, among the big tides of Ungava Bay, is of collecting mussels under ice, in the hollow space left at low tide. "For several minutes I am completely disoriented by this plunge from a bright, frigid upper world into the dark, warm underworld … Muted blue light penetrates from above where the ice is thin or fractured. Large drops of meltwater hang from the ceiling, warping like drips from a slow-leaking faucet. The heavy drops slap the bouldered seafloor as they fall, filling the cave with a chorus of snapping fingers. Bits of seaweed and detritus cling randomly to the ceiling — evidence of the last high tide. A crab skitters across a rock and disappears under the seaweed … Here, in a dreamlike state, I feel inside the body of the ocean."

In China, White attends the Bore-Watching Festival, which attracts more than a million tourists each year. "Squeezed by the (Qiantang) river's funnel-shaped sides and bottom, the tide erupts into an avalanche of whitewater. Known as Yin Long (Silver Dragon), it spits and jerks through the Qiantang's bends and shallows." We learn that there may be a hundred bores worldwide but that the Qiantang bore is unusual not only for its height (25 feet) but because it forms on every tide. It's been a thrill and a terror since before recorded history began. Before the practice was outlawed, "tide players" used to jump into the river carrying colored flags as they tumbled in the water (and often drowned).

The Chinese, by the way, used their intimate knowledge of tides to develop the world's first predictive tide table, carved in stone, more than a thousand years ago — a full two centuries before the Western world created one.

The chapter about tidal power, "Turning the Tide," includes a visit to the world's largest tide and wave energy test site in the Orkney Islands and then Chile, on the forefront of government support for tidal projects. We learn here about the whole history of tidal power. The still-operating Eling Tide Mill, in England, has been grinding grain for 230 years. Barrage-style projects are producing power in France, Russia and Canada. Modern technologies mostly involve devices that sit below the surface in a tide channel, turning with the current the way a windmill turns in the wind. Most of these are still in the experimental stages.

After speaking with a principal in Ocean Renewable Power Company, which has proposed a pilot project in Cook Inlet, near Nikiski, White writes, "Alaska's Cook Inlet … has exceptional tidal resources, but the downside is severe weather, water-borne debris (such as trees), and, due to oil revenues, little or no political incentive for developing renewables."

Finally, in the chapter "Higher Tides," White visits the San Blas Islands off the coast of Panama and then the city of Venice. The two are examples of places threatened by sea level rise due to the warming (expansion) of ocean water and the melting of ice sheets and glaciers. In the former, the residents understand they will soon need to move to the higher mainland but accept the spiritual nature of tides and change. In the latter, high tides rise through the streets and plazas, so that rubber boots and boardwalks are regularly employed, and high-tech floodgates can be activated against the highest tides.

White will visit Alaska in November, from his home in Washington state, to share his tidal adventures. Photos and illustrations in his absorbing book, along with his superb storytelling, give a hint of what to expect.

Nancy Lord is a Homer-based writer and former Alaska writer laureate. Her books include "Fishcamp," "Beluga Days," and "Early Warming." Her new novel "pH" is due in September.