Weirdest book ever in the weird state of Alaska? 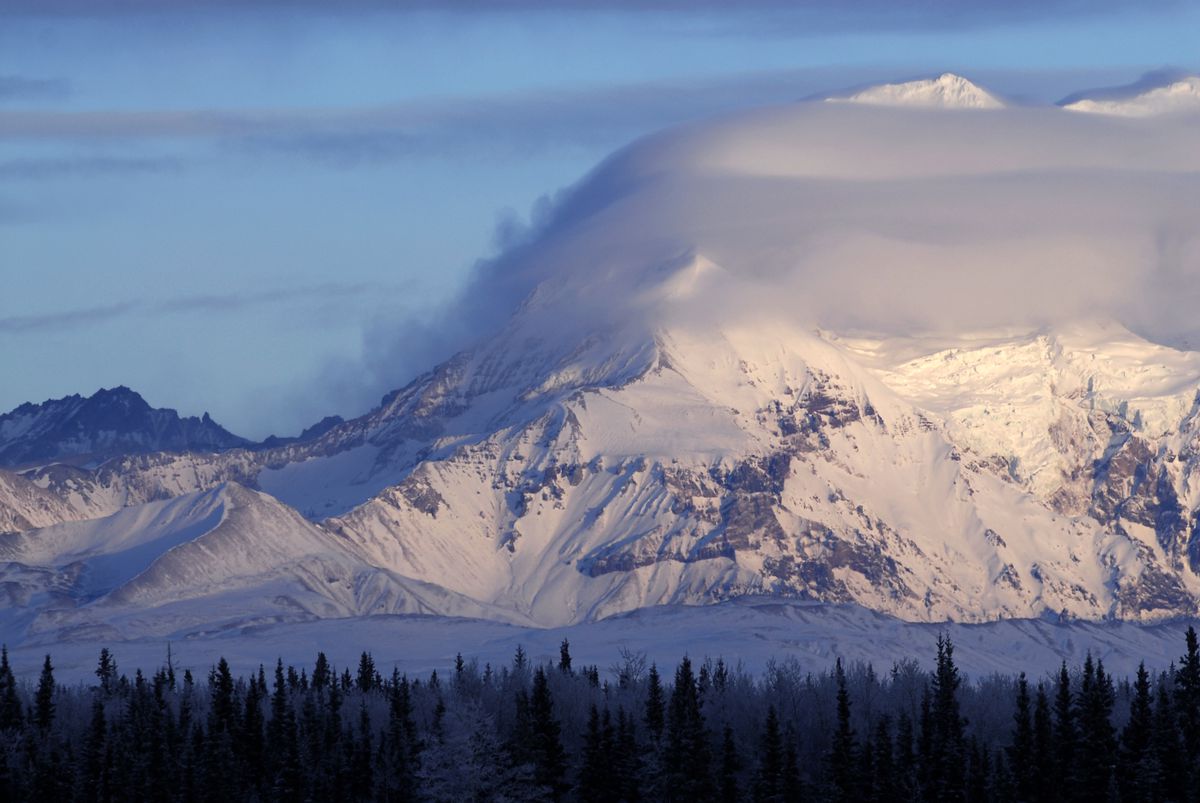 Clouds cover a portion of 12,010-foot Mount Drum in Wrangell-St. Elias National Park. David Marusek’s new novel is centered on a large family of Christian fundmentalists holed up on an inholding in America’s largest national park, a reference to the Pilgrim family that did exactly that in Wrangell-St. Elias.

Clouds cover a portion of 12,010-foot Mount Drum in Wrangell-St. Elias National Park. David Marusek’s new novel is centered on a large family of Christian fundmentalists holed up on an inholding in America’s largest national park, a reference to the Pilgrim family that did exactly that in Wrangell-St. Elias.

For Alaskans here during the first decade of the millennium, the opening premise of David Marusek's new novel "Upon This Rock: Book 1 – First Contact" will be painfully familiar. A large family of Christian fundamentalists holed up on an inholding in America's largest national park are engaged in a standoff with the federal government. Clearly, such readers will conclude, it's a satirical fictionalization of the sordid saga of the Pilgrim family, which spent several years in the headlines as they wreaked all manner of havoc in Wrangell-St. Elias National Park, looking to pick fights while insisting they wanted to be left alone.

Fair enough, one might think, but that story was stranger than fiction, as the cliché goes, and couldn't possibly get weirder. Except it does when a brilliantly glowing object — perhaps an alien spacecraft — briefly alights on the snow during a midwinter night in view of the family patriarch. At this point, things start to get truly bizarre. And it only escalates.

Marusek, who lives in North Pole, has made his name as a top-notch science fiction writer, but with his latest book, he's plunging into new territory. "Upon This Rock" is in some ways a mess of a novel that both lampoons and critiques the Pilgrims, religious fundamentalism, sectarian debates, Alaska, right-wing politics, the government, Sarah Palin, lascivious French women, rednecks and lots more. It's also a science fiction book of sorts that morphs into a horror novel along the way to reaching its entirely unexpected ending (three zombies even make a brief appearance). By any measure, this thing shouldn't work. Yet somehow it does.

McHardy rather than McCarthy

The story is set in and around the town of McHardy, a stand-in for McCarthy, where the Pilgrims were briefly the toast of the town before their ignominious fall. In this case the family goes by the name Prophecy, and the father (known as Poppy rather than Papa) has an outsized brood of offspring bearing names like Proverbs, Deuteronomy, I and II Corinthians, Frankincense, Myrrh and Pharisees.

Marusek makes gleeful mockery of the gang, but not without demonstrating sympathy for the children who, like the Pilgrim offspring, are victims of a father who keeps them largely illiterate and who brainwashes them with his own warped interpretation of the Bible.

The other lead character is Jace Kuliak, a park ranger in his late 20s whose primary concerns are sexual conquests, smoking dope and hiding out from the world in his remote posting.

On a dark, frigid winter's night, Poppy and Jace both witness the brief touchdown of a large illuminated object. Neither is aware the other witnessed the event, and each reaches his own conclusion regarding what it was. For Jace, it's clearly an alien spaceship, and he turns to the internet trying to figure out what happened. Poppy, meanwhile, concludes that it's a sign of the impending apocalypse and looks to his Bible and bank account to prepare his family for riding out the Tribulation in an abandoned mine.

As I said, this book shouldn't work. Yet it does.

As the story progresses, Marusek explores the history of the Prophecy family, which is modeled almost verbatim on the life of Papa Pilgrim and his clan. It's a pillorying of the gross hypocrisies of religious fundamentalism, a long-running theme in American literature dating back at least to "The Scarlet Letter." But here, the target is recent events that actually occurred (apart from the presumed alien invasion). As the family grapples with the unearthly intervention in their lives they attempt to view it through the lens of misunderstood scripture, resulting in no shortage of dilemmas.

There's a lot of satire involved, but as Alaskan readers will know, the Pilgrim family's hidden secrets were not in any way funny. Marusek includes the seamiest elements, and this is where he falls short while working toward his conclusion. Poppy Prophecy's acts are as despicable as Papa Pilgrim's, but Marusek fails to put him in his place (although granted this is the first of three books on the topic, so perhaps justice will be meted out later). The crime is not presented in a manner that conveys its magnitude.

Elsewhere, however, Marusek has a field day, especially when he's lampooning Alaska. His description of the state's two primary cities, delivered while telling of the Prophecy family's arrival in the state, is classic: "One road led south to Anchorage (civic motto: 'Big Wild Weekend'), while the other led north to Fairbanks (civic motto: 'Mired in Our Golden Past')."

Marusek's depiction of McCarthy locals (or in this case McHardy) is also unsparing. For instance, "Pastor Bunyan was a resident of long tenure and one of the most level-headed locals Jace had met (though Bunyan believed in miracles and preached from the pulpit that President Obama was a crypto-Muslim)."

And then there's Vera Tetlin, Alaska's governor, clearly modeled on Sarah Palin and known to Alaskans as the "Barracuda of God."

"Upon This Rock" will have a somewhat limited audience by its very nature. Readers lacking knowledge of the Pilgrim family will miss a lot of the jokes, although the mockery of fundamentalism will be easily grasped. Plenty of the Alaska references will be lost on Outsiders as well. People still sympathetic to the Pilgrims will throw it down in disgust, and those with strong religious convictions will follow suit. The heathens, on the other hand, will love it.

In the end, it's the story that matters, and while he bogs down a bit midway, Marusek makes it work in spite of how far-fetched the whole thing is. He even manages to make readers sympathize with Prophecys once they get caught up in something stranger than they are. And the resolution is not at all what science fiction fans would expect.

It's not the best novel ever set in Alaska, but it's definitely the weirdest, and in a state as weird as Alaska, that's an accomplishment.