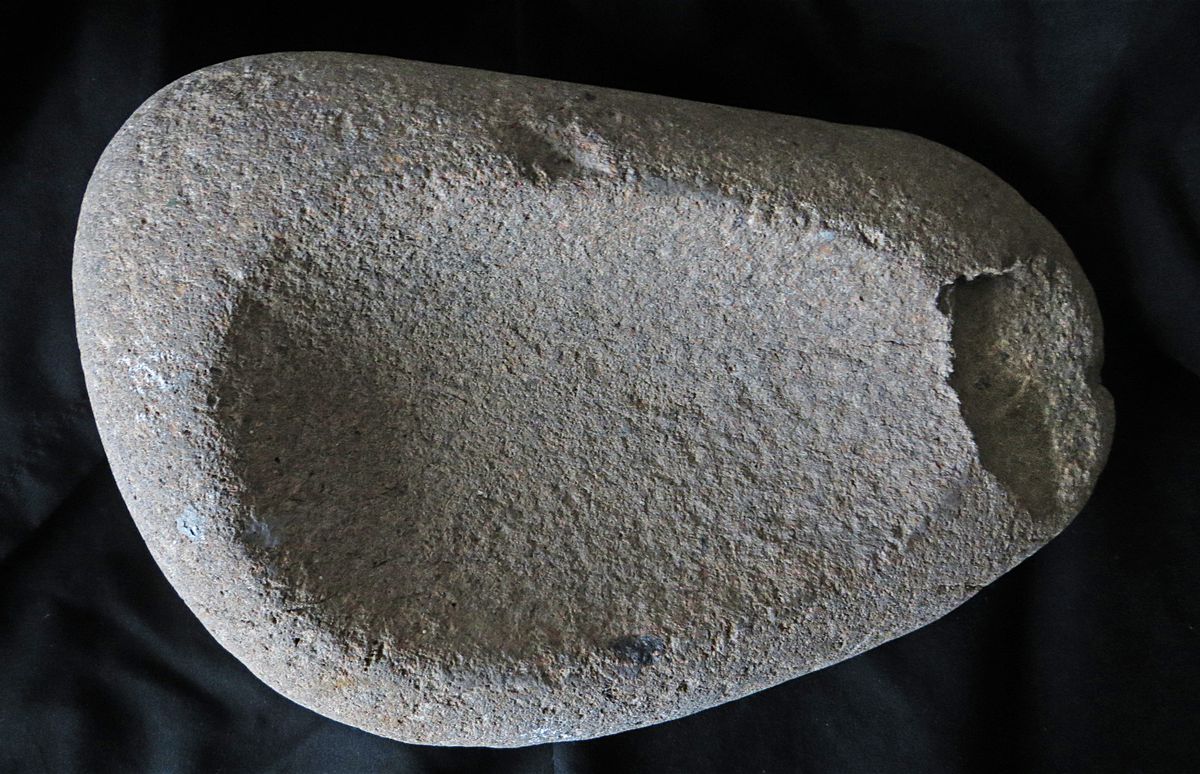 This stone lamp was found by Calvin Fair at Chief Cove in western Kodiak around 1987. It has been returned to Kodiak’s Alutiiq Museum. (Clark Fair)

This stone lamp was found by Calvin Fair at Chief Cove in western Kodiak around 1987. It has been returned to Kodiak’s Alutiiq Museum. (Clark Fair)

Hugging the cheap plastic storage tote to my chest, I crouched in my mother's crawl space and shuffled toward the opening, trying not to bang my skull on the floor joists and wondering what was making this particular container so heavy and unbalanced.

When I moved to Dillingham in 2013, I had crammed more than 20 such totes into the crawlspace of my mother's Soldotna home for safekeeping. Mostly they contained photographs — in packages, boxes, three-ring binders and scrapbooks — plus some important paperwork and memorabilia. Now that my mother was moving to Anchorage, I needed to exhume them and find a place for them in the house I was renting in Homer.

I had not examined the contents of the especially heavy, off-balance tote since filling it in 2012 when Mom moved off our family homestead and into town. My siblings and I had helped Mom empty the den of our father, a longtime Soldotna dentist who died in 2007. Except for items our mother wished to keep for herself, we split up or sold off the rest. One of those items was inside the plastic tote.

Beneath the St. Louis Rams souvenir Super Bowl football and the miniature Star Wars souvenir lunchbox lay a large object wrapped in four layers of old newspaper. I hefted it from the bottom of the tote and peeled back the newsprint like the layers of an onion. There, forgotten until that moment, was a 10-pound chunk of basalt that centuries ago had been ground into a seal-oil-burning stone lamp.

Its concavity was oval, its rim ridged, not flat and smooth like other lamps I had seen in museums. The whole lamp lacked balance and was tapered somewhat at one end. A divot — most likely broken — marked the lamp's low end, and shallow notches appeared to have been excised in the rock on each side of the oval.

I turned the lamp over and noticed that my father had attached to the base a piece of masking tape. On it he had written his name (Calvin) and "Stone lamp—from Chief Cove area, Kodiak, AK. 1987."

Even as I re-wrapped the lamp, re-deposited it in the tote, and heaved the whole container onto a shelf in an upstairs closet, I realized two things: First, I planned to learn more about this lamp and how my father came to possess it. Second, I would not allow the lamp to languish in a box or even to collect dust on a living room shelf. Although it was in my possession, this artifact did not belong to me. If possible, I hoped to send the lamp back home.

A few days later, I photographed and measured the stone lamp, then emailed copies of the photos to Janet Klein, a local historian who had once been the curator of collections at the Pratt Museum in Homer. We dismissed the idea of placing the lamp in a Kenai Peninsula museum collection because it didn't belong here. True repatriation of the artifact, we decided, meant looking to Kodiak, and Janet suggested I contact Patrick Saltonstall, the curator of archaeology at Kodiak's Alutiiq Museum.

Governed by the Alutiiq Heritage Foundation, the museum represents eight Kodiak Alutiiq organizations. If the lamp truly came from Chief Cove, it was likely an Alutiiq tool. I sent Saltonstall the photos I had taken, plus a brief synopsis of the little I knew about the lamp. While I awaited his reply, I began some personal research.

For at least two decades, Dad traveled to Kodiak most years to hunt Sitka black-tailed deer with his friend and hunting partner, Will Troyer. I pored over the pages of Dad's scrapbooks until I found hunting images from 1987. His notes on the backs of the photos indicated that the 1987 hunt had occurred in November in a place called Zachar Bay. Besides scenery and dead animals, the photos depicted Dad and Will and some people I didn't know. There was also a mention of Kodiak dentist Knox Christie, of whom I had heard many times but never met.

Zachar Bay is roughly 10 air miles east-southeast of Chief Cove, which lies near Shelikof Strait, on the open end of Uyak Bay. Could they, I wondered, have traveled to Chief Cove during this trip? I hoped that a non-electrified, boarded-up storage building near Soldotna would hold the answer.

In the building, somewhere in the darkness, lay a container of my father's hunting-and-fishing journals. I gathered my headlamp and made plans to investigate.

A response from Saltonstall arrived just before my departure for Soldotna. "That is clearly an Alutiiq lamp," he said, "and since it does not have a flat rim it is probably older than 1,000 years." Since Chief Cove had once been home to a sizable Alutiiq village, he said, the artifact would definitely fit in with the museum's collection.

He attached "Deed of Gift" and "Donor Questionnaire" forms for me to fill out if I decided to pursue the donation. In the meantime, he suggested, I should attempt to learn as much as possible about how my father acquired the lamp — the better the detail, the better the provenance.

Five minutes after I entered the storage building, my headlamp beam flashed on the plastic case holding Dad's leather-bound journals. I pawed through them for the 1987 edition, then turned to November and began to read. Dad and Will had flown to Kodiak on Halloween, then home on Nov. 11. They shot a lot of deer and encountered plenty of rain. But they never went to Chief Cove, and there was no mention of a stone lamp.

It occurred to me then that the date on the bottom of the lamp might be incorrect. If Dad had labeled the artifact many years after the fact, he may have misremembered.

The answer lay in his 1986 journal. The Oct. 4 entry: "Readied supplies & flew with Uyak Air and pilot Dean Andrews to Chief Cove cabin (FWS) on Uyak Bay … Knox (Christie) would arrive (by his own floatplane) several hours later after picking up his supplies on Afognak Island."

Eagerly I read every entry concerning the trip: Again, plenty of deer, plenty of rain, but no mention of a stone lamp.

Dad's narrative did, however, describe where he hunted, providing clues to his travels while in Chief Cove.

A re-examination of Dad's scrapbooks provided me with a 1986 photo of him standing high on Buck Mountain, according to his note on the back. "Buck Mountain" was a moniker created by Knox Christie referring to the nearest peak north of camp. In the photo, the water and shoreline of Chief Cove stood out clearly in the distant background below Dad.

On Google Earth, I rotated the satellite image and adjusted the angle to match the photo. The pieces of the puzzle were falling into place.

Still, one piece was missing: How had Dad acquired the lamp?

I used a sturdy cardboard box and some bubble wrap to mail the lamp and the proper forms to Amanda Lancaster, the museum's collections and exhibits manager. Then I kept searching.

Dad had been dead for a decade. Will Troyer had died in 2014. I had no idea whether Knox Christie was still alive, although in photographs he appeared significantly younger than the other two men. Mom said she knew nothing about him. A longtime Kenai dentist remembered Dr. Christie but had lost touch with him years ago.

An internet search turned up an email address for a 72-year-old Dr. Knox Christie practicing dentistry in Port Townsend, Washington. I sent him a brief message, detailing my identity and my quest.

Within hours, I received a reply from Lorena Christie, Knox's wife, who said she would forward my email to her husband.

I reflected on the myriad artifacts found on public lands that are lost illegally to personal collections. Many of these items are added to boxes of arrowheads or line shelves with other artifacts. Often they go unlabeled, and, lacking provenance, lose context and their true value.

The Alutiiq Museum, on the other hand, with its strong ties to the Alutiiq people, could perhaps rectify at least this one case. Museums use artifacts to create a fuller picture of a culture as a whole. Artifacts can also serve educational and scientific purposes. For the stone lamp, its scientific and educational value did not lie with me.

The next morning, Knox Christie replied: "There are several old village middens near the shore in that area. You can find them by noticing a lot of clam shells coming out of the eroded banks from the beach at low tide. There are often broken spear points and arrow heads, broken arrow shafts and spear shafts there as well. … I believe Cal found that lamp within a few hundred yards of the Fish and Wildlife cabin they were staying in."

I wrote up a small narrative of what I knew and emailed it, along with the photo of Dad on Buck Mountain, to Saltonstall.

When he responded, Saltonstall completed the puzzle for me with more information and a photograph of his own. The photo, taken in April 2008, showed an unnamed U.S. Fish and Wildlife employee standing in a large depression in the ground. Over her right shoulder lay a small portion of Chief Cove, while over her left shoulder stood Buck Mountain with a receding fringe of snow at its top.

In the three decades since my dad hunted in Chief Cove, Saltonstall wrote, the land in the cove became a private Native allotment and was withdrawn from the Kodiak National Wildlife Refuge. "The main archaeological site is on this allotment," he said, "and it is very close to the cabin where your dad stayed. That is the most likely location for the lamp. It is a HUGE and well known village. It was one of the largest villages in all of Uyak Bay. The house pits are enormous."

The depression in the photo, he added, was an immense house pit near the shoreline and "the likely place where the lamp was found."

Clark Fair of Homer has been a resident of the Kenai Peninsula for more than 50 years.