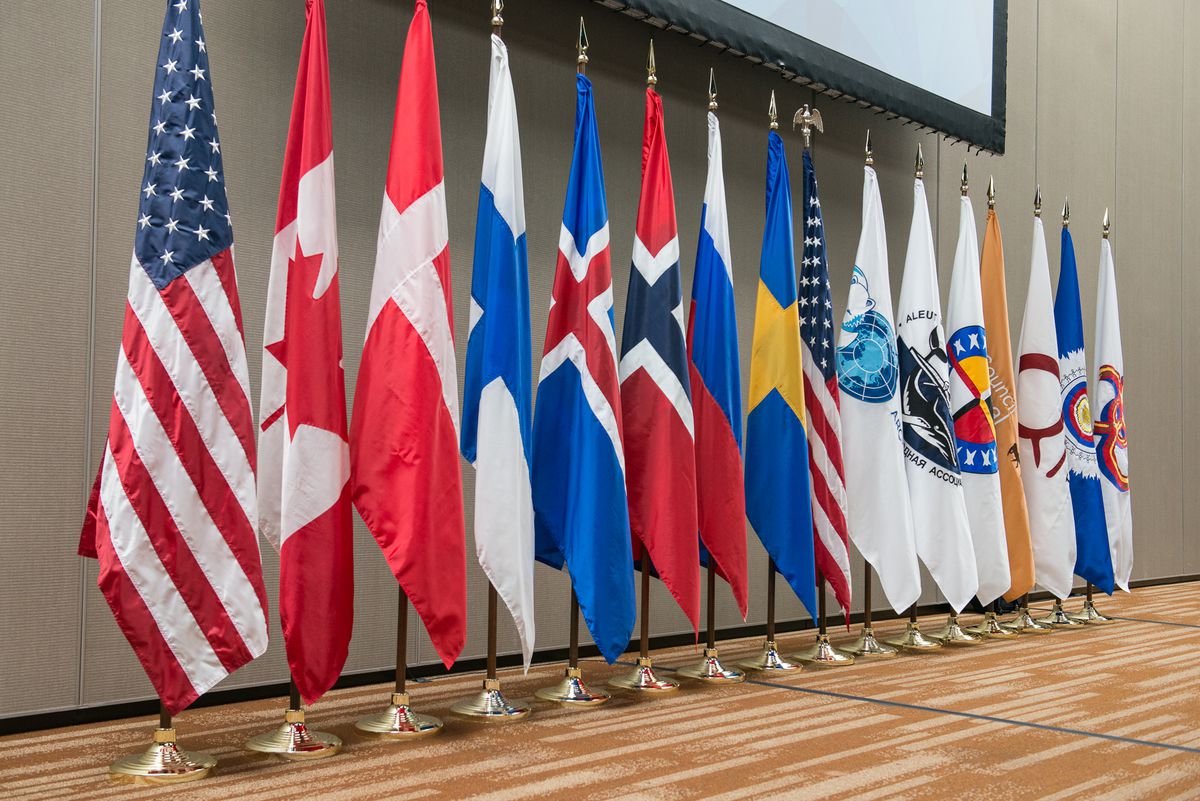 The Arctic Council, the intergovernmental forum to which nations with Arctic holdings belong that deals with issues relevant to the far north and the indigenous peoples living there, is a bureaucratic institution primarily existing for policy wonks, issues advocates and researchers to spend long hours holding endless meetings that usually end with the agreement to hold more meetings. On the surface it doesn't seem like a topic ripe for pillory by a dose of brutal satire.

In the able hands of playwright Kieran Lynn, however, it provides the setting for a work that's exceedingly funny and seriously thought-provoking without ever becoming preachy.

"Breaking the Ice" is a play that debuted in Glasgow, Scotland, last year. The script is available as an imported book as well as through Amazon's Kindle store. A U.S. print edition is set for publication in October. Whatever your preference, if you follow Arctic politics you don't want to miss it.

The story opens in a hotel room in Barrow, where Frank Montgomery, the chief scientific adviser to the British Foreign and Commonwealth Office, is reflecting on what has been a very peculiar day. Dressed in a bathrobe, he explains how he had spilled yogurt on the lap of his suit at breakfast that morning. While awaiting the quick return of his clothes from the dry cleaners in advance of his speech, we learn that nothing has gone as planned.

Montgomery, it turns out, is a geologist with little knowledge of the Arctic who has just been appointed to the position after his predecessor "was struck down with a crippling case of ultraviolet keratitis, more commonly known as snow-blindness." Knowing nothing about issues facing the Arctic, he had hastily written his speech on the plane and then left it in the seat pocket. Also, in true British fashion, he wants a morning cup of tea, something that apparently can't be found in Barrow. And so, still clad in his robe, he sets out to find one. That's where things go amiss.

Lynn, a young playwright who has made a name for himself in Britain by addressing serious issues with a lightheartedness that makes them easily grasped, yet without oversimplifying them, is in good form here. As Montgomery makes his way into Barrow and back to his hotel, he has a series of brief encounters with all the major stakeholders in today's Arctic debates, receiving a crash course on the competing interests seeking to define the region's future.

On one level, Lynn renders Montgomery's conversations with each of the people he meets hysterically inane by utilizing the sort of absurdist humor that the British do better than anyone else (think "Monty Python"; some of the dialogue here is every bit as senseless). Yet amid the laughter, each character who passes through the story makes his or her plea to Montgomery in a way that succinctly summarizes the colliding visions of where the Arctic is headed.

Thus when Montgomery walks into a small grocery store seeking his coveted tea, he finds himself cornered by the shopkeeper (who carries alcohol, coffee and weed, but not Earl Grey), who explains the challenges facing northern communities where jobs are scarce and social problems are abundant.

Moving onward, Montgomery is abducted by environmental activists from an organization called the Forest Owls. The pair of kidnappers are too incompetent to be the militants they envision themselves as, but despite being one of the funniest parts of the play, the scene where they hold him captive nicely conveys the threats to the natural world that Arctic development presents.

These threats are subsequently dismissed by an energy company executive Montgomery later meets who tells him the two most important words in media reports are "scientists say," and who then proceeds to rattle off some of the endlessly contradictory claims one hears depending on which scientist is talking.

The Native perspective comes from a police officer who detains Montgomery after his abduction. For reasons that are unclear, he's Sami, not Inuit as one would expect in Barrow, but this offers Lynn a chance for yet another of the countless idiotic exchanges that make this play so funny:

COP: Ever heard of Sami?

FRANK: Davis Junior? Yes, I've heard a lot about him, but I don't get a lot of time for the classics.

As the cop tries to figure out what a man in a bathrobe is doing on the streets of his town, he fills Montgomery in on how Native peoples are given a seat at the Arctic Council, but being outspent, outgunned and outside the corridors of power, have little hope of influencing the decisions that will affect them more directly than anyone else.

All of Montgomery's discussions lead up to his meeting with a philosophy professor who has somehow managed to become a public policy adviser to the Canadian government. In one of the most lucid moments, the professor asks the questions that lie at the play's heart.

Following up on this thought he adds, "Certainly any mineral exploitation, reduction in shipping cost and so on would do more to raise the lifestyle of others than it would to harm the few people who live in the places it would affect, but could these positives and negatives ever be adequately measured in order to form an undeniable argument? I doubt it."

Montgomery decides where he stands, as does Lynn. But the author gets there by poking fun at everyone (especially bureaucrats), and acknowledging that all sides have merit. It's as mature and serious of a work as it is satirical. Hopefully this play will be staged in Alaska. It speaks directly to our own policy disputes, both in the Arctic and statewide. And it's damned funny.

David A. James is a Fairbanks freelance writer and critic.