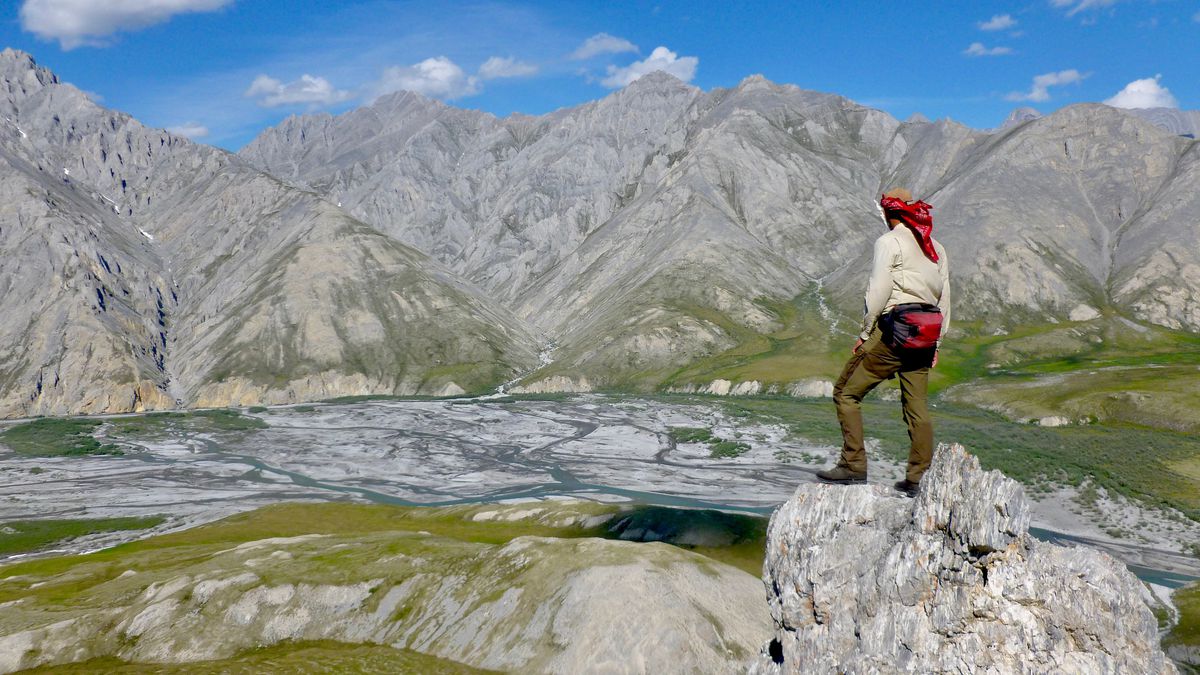 When I put the maps of my Arctic traverse end to end, as I sometimes do to relive the experience, all the wilderness I could ever want spreads across my living room floor. Riven by glacial valleys, shoaled by the coastal plain, Alaska's treeless Brooks Range spans the state's entire width, arcing east to west, a thousand miles scaled down here to just 13 feet. To save weight on my 60-day trek, I kept a journal on the maps' backs and in their margins. The dot-and-dash line of the Continental Divide, which I'd crossed numerous times, squirms on the mountainous spine, splitting waters headed north, to the Arctic Ocean, from those southbound for the Bering Strait.

The map sheets are battered, taped at the folds, as I consulted them often, and often in a drizzle, seeking guidance from two-dimensional oracles. The occasional bloodstain or smushed mosquito speaks of ground-level torments. All formerly blank spaces now crawl with my handwriting, life transposed into text — the work of a nature accountant or a mobile graphomaniac. The map panels, too, are heavily annotated with my symbols for caches, campsites, airstrips — a lifeline to civilization — and my route worming into the wilderness.

I had first set foot in this country more than two decades ago as an anthropology student doing research. The National Park Service wanted to know which areas of Kobuk Valley and Gates of the Arctic national parks Eskimo and Athabascan hunters and gatherers had used in the past. If those tribes could establish prior claims, they would be entitled to hunt and trap in the parks. I had learned much about the region's topography from Inupiaq elders north of the Arctic Circle.

From early adulthood, I've shared the forager's peripatetic streak. Looking at my spread set of maps, my eyes flick to my journey's beginning 20 miles from the Canadian border. I'd hiked east for a day just to toe the line that divides what cannot be divided. I found none of the stone markers or cairns in the cleared corridor. Streams cross it without passports, as do snow geese and caribou, flowing forever between winter and summer ranges. Kin by blood and by custom, but divided by politics, indigenous peoples dwell on each side. On my easternmost map sheet, Canada — "not us" — had been amputated, flush with the grid. Invisible, the boundary — the longest straight shot in the country — runs from Demarcation Point south to Mount Saint Elias, where it jigs into the littoral of Alaska's panhandle; for nearly 700 miles it follows the 141st meridian west, another filament of cartographic imagination.

Following map contours step by laborious step, I quickly wised up to the cartographers' code. Bunched, chocolate-brown lines meant steep climbs or descents; hedgehog marks promised squelchy swamps; robin's-egg blue stood for lakes, ponds and rivers, or finely striated snowfields and glaciers — the same hue spelled the same substance, also wet crossings, coffee breaks by a creek, slippery footing. Black airplane icons, lettering or squares announced human influx. Still, when, from a notch in the Philip Smith Mountains, the westernmost range of the refuge, I saw the glint of the tube that siphons a nation's lifeblood from Prudhoe Bay to Valdez, a lump tightened my throat. I knew then that, short of an accident, I could finish this trek. Roughly two-thirds of the hiking now lay behind me, and, strangely, the silver line in the distance conjured up the comforts of civilization and my one-time home Fairbanks, located on that very same pipeline.

What even my U.S. Geological Survey quadrangles fail to show:

• Tussocks, the knee-high humps of vegetation that taxed my knees, ankles, and spirit;

• The section of Ekokpuk Creek — the worst bushwhacking of the trip — not even hinted at by the usual mint-green patches on the map;

• The depth of streams I had forded, with hiking poles humming in the current;

• The veils of mosquitoes that shadowed me, eager for a meal;

• The grizzlies that circled downwind for a rank whiff of me (which normally sent them bolting).

• Though I did not mark wolf encounters on these sheets, I could still pinpoint each one to within a mile, even without my dense notes.

The maps do not hold the metal taste of spring water so cold it induced ice-cream headaches. They do not carry the perfume of crushed heather or Labrador tea, the soughing of breezes or the tang of August blueberries. They omit the fog that blotted out Peregrine Pass, the wind gusting in Noatak Valley, the rain that soaked me for 30 consecutive days. Nor do they include the small corner of the one quadrangle map I chose not to buy, out of thrift, which, out there, sent me into a cursing and scouting frenzy. You cannot find in them either the image of me afterward, reduced by 25 pounds yet refined, somehow, distilled to an essence. Together with those pounds, mental dross and routines had been stripped away. Six-hundred miles walking and 400 rowing the Noatak River, all by myself, had reopened my eyes to nature's small, quiet wonders.

The blue swath on my westernmost map — the Bering Strait, endpoint of my traverse — stretches south to encompass my former hometown of Nome. Roughly 100 miles from the Arctic Circle, now living in the state's center, its Golden Heart City, I still feel close to the Brooks Range, locus of my desire. In this world, I realize once again, there are no topographic margins. Unlike a sphere rendered in two dimensions — a Mercator projection — Earth has no here or there, no beginning or end. More so than the maps arrayed in my living room, the world they encrypt is connected.

Michael Engelhard is the author of "Ice Bear: The Cultural History of an Arctic Icon." He writes widely about history, exploration, cultures and cartography. Living in Fairbanks, Alaska, he works as a wilderness guide in the Arctic.