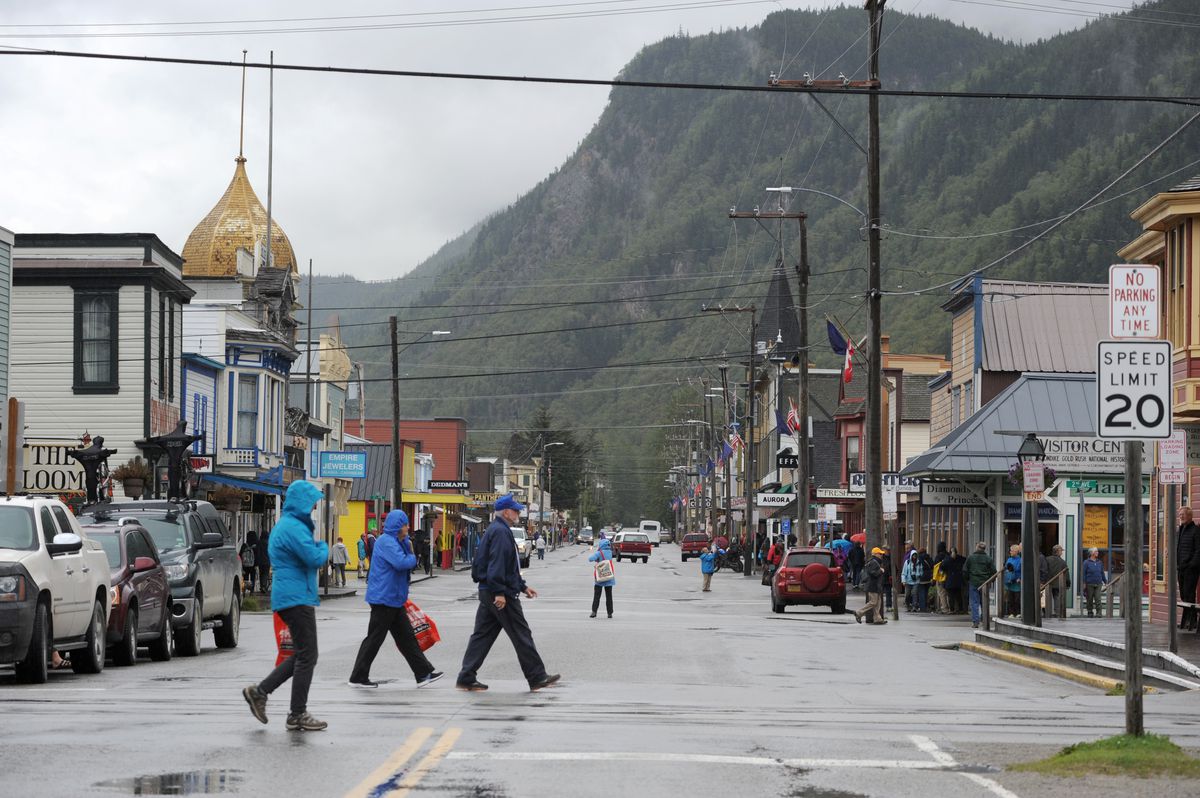 Broadway Street in Skagway is full of visitors, many of them from the cruise ship Coral Princess, in August 2015. (Anne Raup / ADN archive)

Broadway Street in Skagway is full of visitors, many of them from the cruise ship Coral Princess, in August 2015. (Anne Raup / ADN archive)

SKAGWAY — I dislike cruise ship tourism. Saying this, I recognize that I profess a non-unique Southeast Alaska sentiment; my distaste has been thoroughly griped about and well chronicled. In his article "Shipping Out," David Foster Wallace calls cruise ships representations of "the Calvinist triumph of capital and industry over the primal decay-action of the sea." Cruise ships seem the antithesis of the perpetually rusting fishing boats and crusty fisherman I associate with my home in Tenakee Springs.

Even worse, the small Disneyland-esque downtowns that have bloomed all over Southeast Alaska have a synthetic, squeaky-clean feel to them, emblematic of the most extreme of American consumer culture. They feel fake. They don't represent my version of Alaska at all.

However, I admit — begrudgingly — an affection for Skagway, the community that has embraced cruise ship tourism beyond all others.

According to its visitor homepage, Skagway's 1,000 residents receive about 1 million visitors annually. In the summer, the restored boardwalks flood with passengers from all over the world. Up to six cruise ships, the biggest of which can fit 6,000 passengers, dock in Skagway's small port. No other Southeast Alaska town of that size can absorb and entertain that many visitors — or wants to. Skagway, unlike larger communities of Juneau or Ketchikan, seems lost behind its visitors, an extension of the cruise ships, a place that, without visitors, is no place at all.

I recently spent four days in Skagway for the North Words Writers Symposium, which the city of Skagway sponsors. The conference attracted an impressive faculty: keynote speaker Paul Theroux, as well as well-known Alaska writers Sherry Simpson, Tom Kizzia, John Straley, Deb Vanasse and more. All in an intimate setting of fewer than 50 participants. We were treated to dinner at Poppies, a restaurant that looks out at a sweeping garden where blown-glass sculptures and miniature trains sit among the flower and vegetable gardens. We spent an evening in historic Dyea, listening to local music and eating fresh fish. On our last day, we took the White Pass Railroad, then a guide hiked us up to the Laughton Glacier. It was touristy and, honestly, quite lovely.

Skagway fits its geography as the intermediary between Southeast Alaska and the Yukon. On one side of town is the ocean, on the other is Canada. Ships come up Lynn Canal, flanked by steep mountains. In spring, greenery bestows fresh color on the evergreen-blue mountains, peaks still dusted with snow. When the ocean stops at the head of the inlet, the mountains continue, leaving just a flat sliver of land for a town. Skagway was built in this corridor on a long, skinny grid. The main street, Broadway, takes up the route to Canada where the ocean leaves off.

From a coffee shop window on Broadway one morning, I watched tourists push through the wind and duck into jewelry and Alaskana knickknack stores. Glacially cooled air also uses this corridor as it races toward the ocean, like the ghosts of early prospectors rushing home. Across the way, even the Wells Fargo bank had a facade that could have fit in a Hollywood Wild West movie set. A tour guide wearing a bustle hollered, "We're backing up to Broadway!" as she shook her hips. The display was ridiculous, an over-the-top reincarnation that is as much about what tourists want to see as it is about history. I giggled. I grew up in Juneau, where a less extreme version of this cartoon-style history exists — though Skagway's theatrics put Juneau to shame.

Somehow, in Skagway, I can accept these over-the-top displays because Skagway's focus on visitors has historical significance. Skagway was, after all, a Klondike Gold Rush boom town. Visitors are what Skagway has always boasted of — Jack London in the early 1900s and John W. Nordstrom, who later started the store Nordstrom. Even Soapy Smith, the famous criminal, lived in Skagway less than a year before his infamous shootout death — and was there to capitalize on miners who were moving through. The quickest path from the Lower 48 to the promise of gold was up Southeast Alaska's Inside Passage, through Skagway, then hiking up and over the Chilkoot Pass to the Yukon in Canada. Skagway was not the place with gold, it was a place that prospectors visited on their way to where they were going.

In 1898, Skagway ballooned to more than 8,000 people. Prospectors bought supplies, drank booze, gambled, found company in the local prostitutes, then headed north. Some struck it rich and returned to Skagway, spending every penny before they ever made it home.

These days, the town's main strip has been restored to this late-19th-century glory. Women in corsets and full skirts stroll up and down the street giving tours, train conductors wear sharp outfits, and the story of Soapy Smith is re-enacted. In the winter, when the cruise ships stop coming, shops are boarded up like any other boom-and-bust ghost town. It is — and has been for a long time — a place that has pandered to excess and embraced hyperbole.

While I want to roll my eyes at Skagway, I realize I, too, have been seduced by this place. Visitors are Skagway's history, its "authentic" Alaska identity. Embracing — and capitalizing on — the tourism industry is consistent with Skagway's character for more than 100 years.

Megan Bush Moody lives in Tenakee Springs with her partner and two dogs. She is currently finishing her first book, a memoir about her family's experience with schizophrenia.