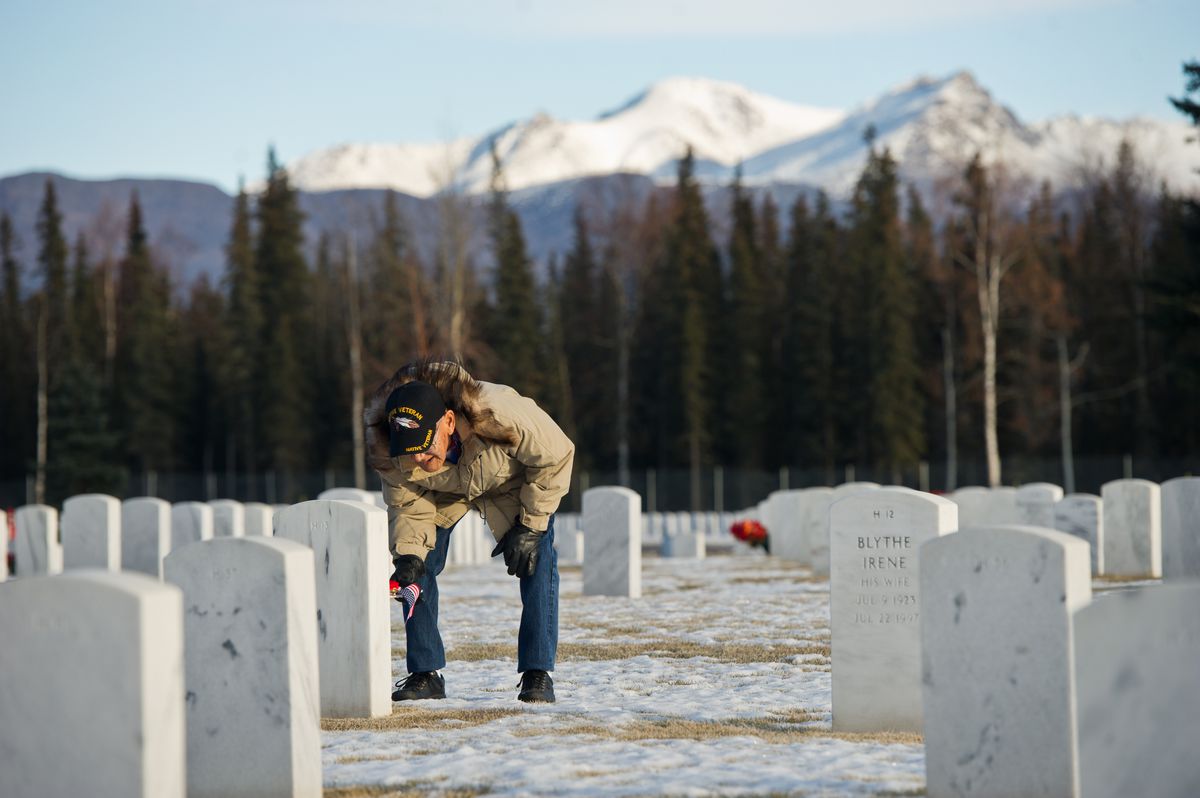 Howard Nunooruk Sr. places flowers on the gravesite of his brother Romeo Nanooruk at Fort Richardson National Cemetery on Veterans Day on Nov. 11, 2016. Romeo Nanooruk, who died in 1987, was a World War II veteran who fought in the Aleutian Islands campaign, according to Howard’s son, Homer Nunooruk. (Marc Lester / ADN archive)

Howard Nunooruk Sr. places flowers on the gravesite of his brother Romeo Nanooruk at Fort Richardson National Cemetery on Veterans Day on Nov. 11, 2016. Romeo Nanooruk, who died in 1987, was a World War II veteran who fought in the Aleutian Islands campaign, according to Howard’s son, Homer Nunooruk. (Marc Lester / ADN archive)

The Thousand-Mile War: World War II in Alaska and the Aleutians

This space is normally reserved for reviews of newly released books, but an exception is being made here to take a fresh look at a classic. Brian Garfield's "The Thousand-Mile War" was originally published in 1969 in response to the 25th anniversary of World War II's Aleutian campaign and was a finalist for the Pulitzer Prize in history. It was republished in 1995 in the University of Alaska Press' Classic Reprint Series, to commemorate the campaign's 50th anniversary. This year marks the 75th anniversary — a time of remembrance and retrospection as the veterans of that war depart us and our national memory fades.

A surprising number of Americans today are unaware that part of World War II was fought in the Aleutian Islands, involving upward of half a million men and costing perhaps 10,000 lives. In early June of 1942, Dutch Harbor was bombed, and then, at the end of the Aleutian chain, the Japanese invaded and took control of the islands of Attu and Kiska. On Attu, the 42 Native Attuans were captured and shipped to Japan as prisoners of war, along with the white schoolteacher. (Her husband, a radio operator, was killed.) On Kiska, 10 members of a weather team, the only inhabitants, were similarly taken prisoner.

For the next year Japan held the two islands, while the U.S. built up air and naval bases on other Aleutian islands and bombed Kiska at every opportunity. (The U.S. also evacuated the Aleut people from the remaining islands in an ill-planned relocation that left them in terrible living conditions for the remainder of the war.) The Aleutians' notoriously bad weather and difficult terrain became a common enemy for both sides.

Death on both sides

Then, in May of 1943, the Americans counterattacked Attu. The Battle of Attu, thought by its planners to take no more than a couple of days, ended up raging for 19 days before routing the Japanese from their dug-in positions in the mountains. In the end, the American force suffered 3,829 casualties — including 549 dead and a couple thousand with severe-cold injuries and foot damage due to inadequate clothing and supplies. The Japanese dead numbered 2,351. This was the second-most costly American battle in the Pacific — second only to Iwo Jima.

In August, American troops made a similar attack on Kiska — only to find that the island had been quietly abandoned under fog a couple of weeks earlier.

The details of all this, deeply researched and with great attention to various military leaders and strategies, fill the pages of this fascinating book. Garfield was primarily a novelist before turning to this history, and his talent for storytelling — for bringing readers right into the lives of his characters and the action — is evident here. Many of his sources were unavailable until he succeeded in having them declassified, making his book the fullest account of the Aleutian war at the time (and still, arguably, the best). In the 1995 edition he corrects errors and adds new information; he also adds to the extensive bibliography so that other scholars and interested readers can go deeper into the research.

Garfield does not hold back with critiques of personalities, decision-making and poor planning. A reader cannot help but wonder whether much destruction and loss of life could have been prevented with additional caution, coordination and planning. Garfield shows us that, again and again, the men making life-and-death decisions discounted what others had to say, operated on poor intelligence or let egos get in their way. The strategic value of the Aleutian campaign is still debated — and probably will be forever.

In recent years, veterans of the Aleutian campaign have made numerous return visits to the islands. On this 75th anniversary, there are few left to remember what they went through, and still fewer capable of making such a long trip. Similarly, the names of some who played significant roles are now detaching from those roles and, if not forgotten, are remembered for different reasons.

It's likely that more Alaskans are familiar with the Buckner Building, the abandoned eyesore in Whittier, than with Gen. Simon Bolivar Buckner Jr., commander of the Army's Alaska Defense Command who played multiple key roles during the war (and was killed in Okinawa.) Gen. Benjamin Talley lived quietly in Anchor Point until his death in 1998; he was known as the "father of military construction in Alaska" and was famously responsible for building airfields in the Aleutians in a matter of days. Adm. Thomas C. Kinkaid, who commanded the Navy forces in the Aleutian campaign, is memorialized with a destroyer, the USS Kinkaid.

Today the islands of Kiska and Attu are entirely uninhabited by people and are part of the Alaska Maritime National Wildlife Refuge. They are beautiful fog-shrouded and wind-whipped landscapes still riddled with tunnels used by the Japanese, pocked with water-filled bomb craters, and littered with the remains of military debris. Their history each year sinks farther into the tundra.

The main battlefield area on Attu is a national historical monument. In 1987, with U. S. approval, the government of Japan placed a peace memorial at the battle site. Its inscription, in both English and Japanese, reads, "In memory of all those who sacrificed their lives in the islands and seas of the North Pacific during World War II and in dedication to world peace."

In an early chapter, Garfield noted that "Japan had captured a pair of islands she did not really want and had precious little use for. At equal expense, the United States had made strenuous but impotent efforts to defend the same unwanted and useless islands … Japan was afraid of an American invasion; America was afraid of a Japanese invasion. Fear forced the choice of their pathetic battleground."

We would do well to ask, in 2017, what lessons we may have learned from the thousand-mile war.

Nancy Lord is a Homer-based writer and former Alaska writer laureate. Her books include "Fishcamp," "Beluga Days" and "Early Warming." Her new novel "pH" will hit bookstores this month.