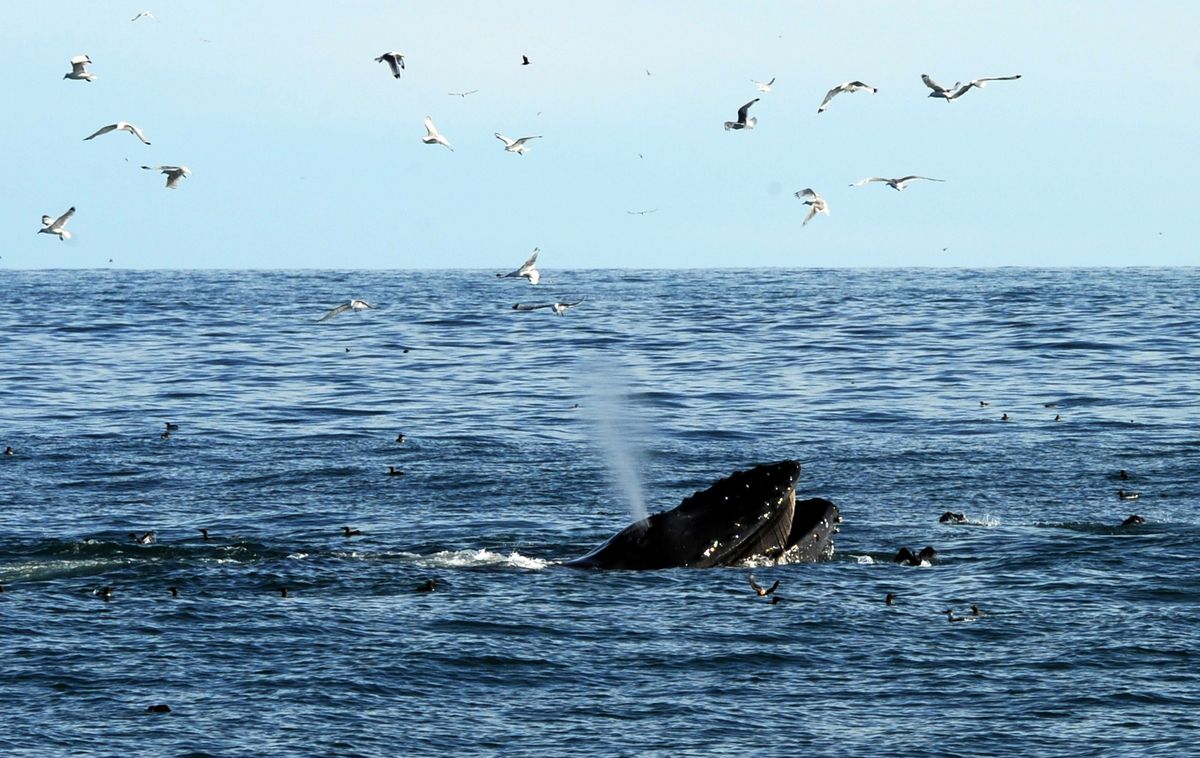 A humpback whale surface feeds in the company of opportunistic kittiwakes at the mouth of Resurrection Bay near Seward. (Erik Hill / ADN archive 2014)

A humpback whale surface feeds in the company of opportunistic kittiwakes at the mouth of Resurrection Bay near Seward. (Erik Hill / ADN archive 2014)

Editor's note: Homer writer Nancy Lord was Alaska writer laureate for 2008-10. From her many years of commercial salmon fishing and, later, work as a naturalist and historian on adventure cruise ships, she's explored in both fiction and nonfiction the myths and realities of life in the north. Among her published books are three collections of short stories and five works of literary nonfiction, including the memoir "Fishcamp," "Beluga Days," and a story of climate change, "Early Warming." She also edited the anthology "Made of Salmon: Alaska Stories From The Salmon Project." Lord teaches creative writing at the University of Alaska Anchorage and science writing in the online Johns Hopkins graduate science writing program. She also reviews books for We Alaskans.

Her first novel, "pH," was published this month by Graphic Arts/Alaska Northwest Books. The first section of the book, excerpted below, takes place on an oceanographic cruise in the Gulf of Alaska.

Coffee cup in hand, Ray went looking for his daughter. He had hope for her inquiring mind, which seemed more promising than her brother's. At 16, Sam loved driving fast machines but seemed to have no interest in how they worked or what to do when they stopped working, and he avoided the natural world except as a playground for said machines. Of course, science recognized that the adolescent brain, especially the male one, was incompletely formed. Hadn't he himself been an idiot, in multiple ways, during his teenage years? Aurora, on the other hand, was watchful and attentive to detail, and she loved animals.

But where was she? Not in the galley. He headed for her cabin, a vision of a disapproving Nelda hurrying his steps; you didn't just leave your 11-year-old to fend for herself in a strange place! What if she'd gotten disoriented and fallen down a ladder into the engine room? What if the ship's crew, who he knew from previous cruises to be incredibly nice guys, really weren't? What if she was barfing her guts out? If she was seasick now it was going to be a long week's cruise.

But there she was on her back on her top bunk, still wearing purple pajamas. She was plugged into her iPod, jiggling one leg, and staring into another electronic screen that he'd never seen before.

"There you are," he said, pretending that he hadn't just panicked. "Would you like to get dressed and come see what the others are doing?"

He waited a couple of beats while the electronic device beeped. "Hey," he said, "I'm going to get my binoculars. Let's go up on the flying bridge and see what birds are around. And porpoises. There were porpoises a little while ago. I should have come and got you then."

They passed onto the deck where the carboys — those glass incubation jugs they'd hauled from Fairbanks — would be set up, and up the stairs to the pilothouse where Captain Billy refilled Ray's coffee cup with an earth-friendly blend. It was already afternoon in New York, and a Mets game was playing on the radio. Billy showed Aurora the GPS and the depth finder and then the paper charts that marked their course straight out from the mainland to the edge of the continental shelf. She feigned interest, politely. He let her sit in the captain's chair. Ray could tell that Billy really wanted to listen to the Mets game. He thought he'd like to hear the game, too, but he had the wrong job for that.

Aurora frowned at him but was already through the door, a fairy princess in an oversized hoodie that reached almost to her knees.

They climbed the ladder behind the pilothouse — Aurora as fearless as a monkey, Ray spotting from below. Topside, she took a seat on the padded bench where biologists on survey cruises sat to record their marine mammal and bird sightings.

Ray's boyhood fascination with birds had never worn off, even as he'd learned that his eyesight and temperament were better suited to small things he could capture and control. That was like so much in his life, starting off large and getting smaller — dinosaurs, then gorillas and bears, hawks and owls and the wood ducks of his Michigan youth, down to passerines he could hold in his hand, dragonflies and beetles, the nearly invisible world of microorganisms. Not that there was anything inherently "better" about the larger and more charismatic species, but he had seemed to know at an early age that he himself would not be large — in the sense of attainment — or charismatic. He'd recalibrated his ambitions several times along the way, through school and in the romance department, where he'd somehow lucked out with a wife who exceeded his expectations — but who also knew this and sometimes reminded him.

He raised his binoculars now, setting on a single kittiwake that winged lazily across the bow. Off to one side, three glaucous-winged gulls, two of them juveniles with muddy-looking feathers, rode a half-submerged log.

"Where's the porpoises?" Aurora bounced on the bench.

"You know what to look for?"

"Rooster tails. Water will be spraying from their backs when they break the surface. It'll be just quick splashes, they swim so fast. Here." He handed her the binoculars, placing the strap around her neck. "Look at those gulls on the log. Oh, and look! There's a puffin, a horned puffin." The football-shaped bird with its white front beat past; he could just make out the orange bill with his bare eye.

She was slow to track the bird, to lift the glasses and aim them in the right direction. He could tell she was only pretending to see it, for his benefit. It was too far away now.

A retired bird biologist had told Ray, just a couple weeks earlier, that he used to do surveys along the coast behind them, and that the numbers of birds today were mere fractions of what he'd observed in the 1970s. Especially murres. They used to be as thick as flies, he'd said. Now tourists saw a few murres and puffins, maybe a red-faced cormorant, and thought they were looking at abundance because they didn't have anything to compare with. They couldn't begin to imagine the thickly-packed and cacophonous cliff colonies, the huge rafts of seabirds covering the nearshore waters, the darkened skies when they flew. Ray had also heard from a tour guide that the guides never said anything to their customers about diminution. If they saw just one puffin or one orca, they exclaimed over it: You're so lucky to see that! The tourists went away thinking they'd just had an amazing nature experience in a pristine, undisturbed, Serengeti landscape. Because really, the guide had said to Ray, these people paid a lot of money to go on their tours and cruises and you wanted them to think they were having the best wildlife experience ever. Why would you want to depress them by mentioning climate change or that there was oil under the beach sand or that the reason a group of birds was resting on the water in the middle of summer was because they'd had a complete reproductive failure?

And now, on top of all those other insults, an acidifying ocean.

A picture of Jackson Oakley crowded back into his mind — that shiny smooth face that reminded him of the smiley faces people sometimes used, annoyingly, in their emails. Who was the man consulting with? What was he saying in his apparently many speeches? Was it all about his precious calibrating instruments and the need to study, study, study more ocean chemistry?

Ray looked at his daughter, her uncombed hair blowing back in the breeze as she held tightly to the binoculars aimed at the sky, at feathers of clouds farther out over the Gulf.

The Gulf stretched to the horizon, an achingly beautiful scene if you didn't know better. He was the cup-half-empty guy, the realist, but he knew he ought to let others — children at least — enjoy some innocence. He would bite his tongue. He would not say, "You should have seen this place when …"

He did the best he could under the circumstances, which was to say nothing.