Fishing for prehistoric traces of sockeye salmon in Eklutna Lake 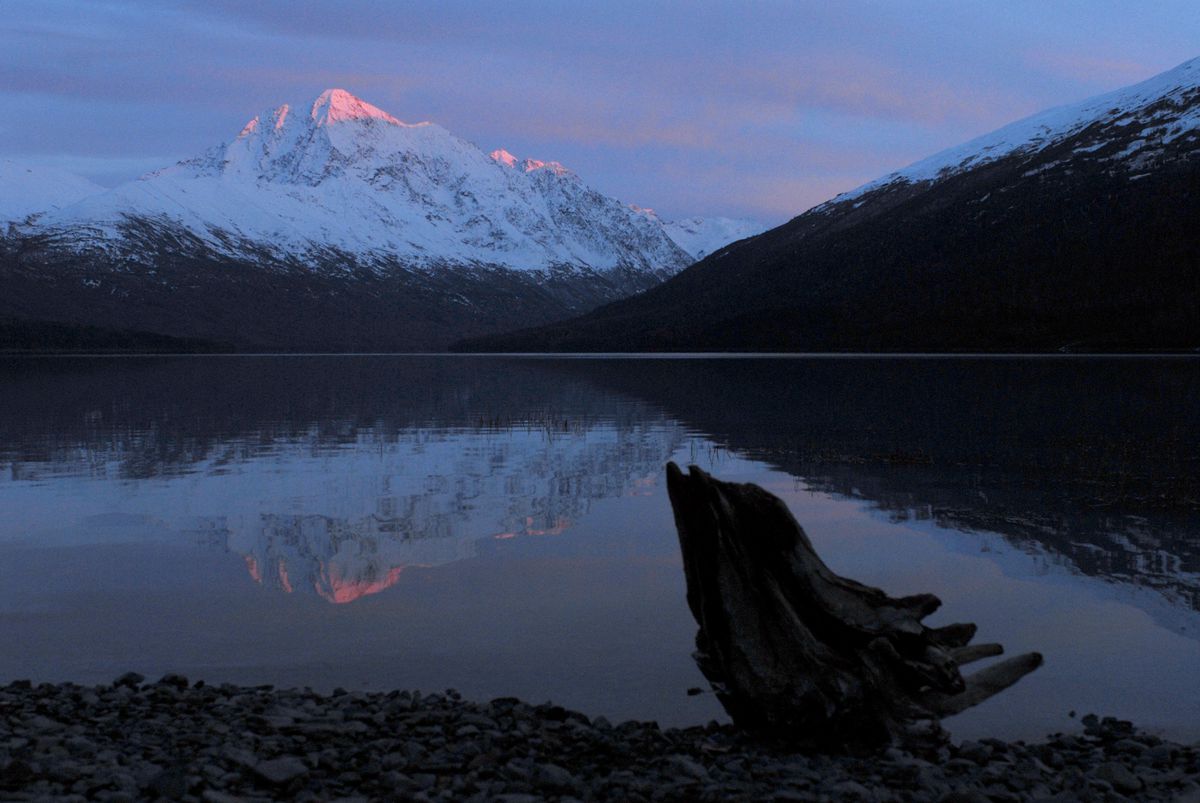 A recently published analysis of sediment layers has found no evidence of anadromous salmon in Eklutna Lake as far back as 1859. However, oral history and at least one written record suggest that ocean-reared salmon used to migrate up the Eklutna River to spawn in the lake. Who's right?

This question has great relevance for Eklutna Lake's future. A dam completed in 1929, about 1 1/2 miles above the Old Glenn Highway, cut the Eklutna River in half. Although all five species of Pacific salmon are still found in the river below the dam, no salmon has migrated upstream beyond the dam since 1929.

This derelict dam is being demolished by The Conservation Fund and Eklutna, Inc. Its removal will allow salmon to swim an unknown distance upstream. But not as far as the upper dam, which was built at the lake's outlet in 1955 in association with a federal hydroelectric project. The upper reaches of the Eklutna River run dry every summer because little or no water is allowed to spill out of the lake.

Documenting the former presence of salmon in the lake isn't merely an academic exercise. An agreement signed in 1991 – when the federal hydroelectric facility was bought by local electric utilities and the city of Anchorage – stipulated that within 30 years of the transfer date the owners would pay for the restoration of the Eklutna watershed.

The kind of restoration efforts that will be required will hinge on whether or not the Eklutna river and lake supplied spawning and rearing habitat for anadromous salmon before the dam was built.

The article published in Arctic, a peer-reviewed scientific journal, is titled "Evaluating evidence for historical anadromous salmon runs in Eklutna Lake, Alaska." It was written by Michael Loso, Bruce Finney, Richard Johnson, and myself. The lead author, Loso, formerly a professor at Alaska Pacific University and now a National Park Service geologist, has devoted years to studying Eklutna Valley glaciers.

No salmon in Eklutna Lake?

Fisheries biologists have monitored spawning salmon populations in some Alaska lakes for more than a century. But the spawning history of many lakes is unknown, particularly where no written records exist.

The isotope is present in low levels in terrestrial organisms. Its elevated presence in the sediment layers on the bottom of a lake can be strong evidence that anadromous salmon spawned in the lake. Because the annual sediment layers in a glacial lake are easily identified and counted, a historical record of salmon spawning can be extended as far back as sediment layers can be collected and teased apart.

The isotopic analysis developed by Finney has been used to document the prehistoric presence of sockeye salmon, the species most likely to spawn in great numbers in Alaska lakes.

Recently, scientists had a serendipitous opportunity to apply the technique to the sediment layers at the bottom of Eklutna Lake. A group of earthquake researchers from Ghent University in Belgium removed sediment cores from the lake in 2016. Annual layers were clearly discernable as far back as 1859.

Johnson, at the time an undergraduate at Alaska Pacific University, traveled to Belgium to obtain samples from one core for further analysis as part of his senior project.

The isotopic analysis found no evidence of an increase in marine-derived nutrients deposited in the lake prior to the dam. In other words, there was no record of anadromous fish living in the lake during the past century and a half.

But wait. What about the oral history of the Dena'ina people, who have lived in upper Cook Inlet and fished the Eklutna river and lake for longer than that? Eklutna used to be a winter village, where people gathered after fishing for salmon in Knik Arm all summer. According to cultural anthropologists who have studied early Dena'ina ways, winter villages were associated with streams with late runs of coho and sockeye salmon.

Native elders have long claimed that salmon spawned in the Eklutna river and lake before the dam was built. The environmental assessment conducted by the federal Alaska Power Administration for the sale of the Eklutna hydroelectric project in the early 1990s concluded that the transfer was complicated by the "loss of a Sockeye salmon run that once spawned in Eklutna Lake" and that "complete loss of the anadromous salmon run (Sockeye) undoubtedly occurred with the construction of the 1929 dam."

No source was provided for this claim. It may have been based on oral history of the Dena'ina people or the recollections of one or more old-timers. At any rate, it should have put the purchasers on notice. The seller believed sockeye salmon spawned in the lake before the dam was built and presumably expected the purchasers to restore the salmon run as promised in the 1991 agreement.

The oral and scant written history gain credence from another source. Kokanee – landlocked sockeye salmon – are found in Eklutna Lake, according to the U.S. Corps of Engineers in 2011, despite being uncommon in Alaska. The kokanee may be relics of a former run of anadromous sockeye salmon.

Before we can discount the oral history, we must account for several scientific uncertainties. What if there were salmon in the lake, but in numbers too few to deposit enough nitrogen to register on the instruments? The stable isotope technique doesn't work well under certain conditions, such as when the sediments contain large amounts of terrestrial organic matter or when a large volume of water supports relatively few salmon. Eklutna Lake, for example, replaces its water in only 1.7 years, based on average annual inflows.

And then there's the observed natural variability in nitrogen isotopic composition. Our analysis was based on estimates of fish weight, nitrogen content, and isotopic composition that were measured in other lakes and might not be representative of sockeyes from Eklutna Lake, though they are fairly uniform across Alaska.

Employing a simple sensitivity test, Finney found that Eklutna Lake could have hosted as many as 15,000 spawning sockeye salmon annually without being detected by the isotopic analysis, which has a margin of error of ± 0.2 percent.

Our results do not demonstrate that such runs existed, but neither can our results be construed as evidence that they did not.

Salmon streams tend to be much richer in nutrients than other Alaska streams. The spawning salmon, their eggs and fry, and their spawned-out carcasses feed many other animals, from freshwater invertebrates to rainbow trout, dippers to eagles, river otters to bears.

The Eklutna river and lake are relatively sterile systems now. Adding salmon to the ecosystem should cause an almost magical transformation.

Restoration of a former salmon-spawning stream would seem to require re-establishing a salmon run. What target should we aim for? Perhaps the upper limit should be 15,000 sockeyes. But that's just sockeyes and only in the lake.

Restoring salmon runs will require increasing the spillage over, under or around the upper dam, at the lake's outlet, adding enough flow to allow sockeye salmon to access the lake. Given back its source of water and marine-derived nutrients, the river itself will decide whether chinook, coho, chum and pink salmon runs will re-establish themselves.

Rick Sinnott is a former Alaska Department of Fish and Game wildlife biologist. The views expressed here are the writer's own and are not necessarily endorsed by the Anchorage Daily News. Contact him at rickjsinnott@gmail.com.