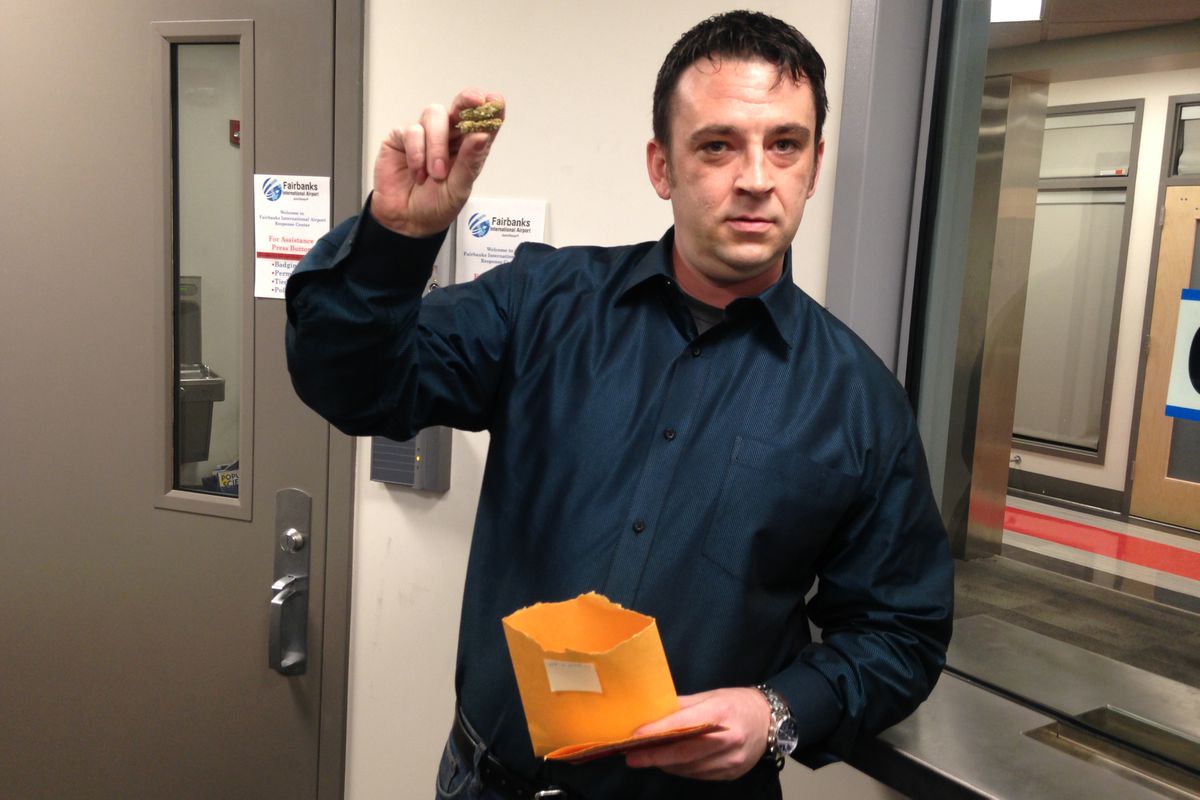 Frank Berardi of Fairbanks holds marijuana that had been surrendered at the Fairbanks airport in July, but was returned to him on Monday following a court order. (Laurel Andrews / Alaska Dispatch News)

Frank Berardi of Fairbanks holds marijuana that had been surrendered at the Fairbanks airport in July, but was returned to him on Monday following a court order. (Laurel Andrews / Alaska Dispatch News)

FAIRBANKS — Just after 9 a.m. Monday, Frank Berardi waited in the entryway of the Fairbanks International Airport Police and Fire Department building. Sean Martines, chief of police and fire for the airport, arrived a few minutes later. He shook Berardi's hand.

"I've got some marijuana for you," Martines said.

Berardi's marijuana – 8 grams of the strain Pineapple Express – had been taken while he was passing through airport security on July 27, headed to Anchorage on an Alaska Airlines flight, he said. When a Transportation Security Administration agent asked if he had anything breakable in his carry-on bag, Berardi mentioned the jar of marijuana.

TSA's national policy is to call local police when marijuana is discovered. Fairbanks International Airport police arrived, and Berardi was given a choice: put the marijuana in a car or give it to someone else, rebook his flight, or give it to police so they could dispose of it, Martines wrote in an August letter to Berardi's attorney.

He decided to hand the marijuana over, but wanted to get it back. Berardi was told to get a court order for release of the cannabis. He filed a civil suit, got the order, and on Monday, the marijuana was returned in a brown paper bag.

"I feel great," Berardi said afterwards, with the bag in hand.

Berardi and his attorney, Amy Welch, both say the marijuana should never have been taken. And police will likely change how they handle small amounts of cannabis flagged at the Fairbanks airport, Martines said Monday, joining Anchorage in allowing small amounts of marijuana through screening.

Berardi's case highlights two issues in the push-and-pull of conflicting federal and state cannabis laws: Whether it's legal to travel with marijuana, and whether a court order is needed to have a legal quantity of surrendered marijuana returned.

[Why legal pot may suddenly be in big danger under Trump]

Since marijuana was legalized in Alaska in November 2014, it has been unclear whether in-state travel with pot is permitted, given that cannabis is still illegal at the federal level, which governs public transportation.

In Anchorage, passengers who have the legal state limit of marijuana (1 ounce or less) can keep it after being interviewed by police, said Jesse Davis, chief of Ted Stevens Anchorage International Airport Police and Fire. That policy has been in place since February 2015.

"We'll still complete a police report in case the federal government wants to pursue it, but we would not take state action because they have not broken state law," Davis said.

People are also given the option of putting it in a car, or handing it to someone. But many people choose to give the marijuana to police. Passengers may have different reasons for surrendering it to police, Davis said — they may not want to be delayed while rushing to catch a flight, or they may not want their name recorded by police.

"It's not unusual, and we deal with it quite a lot, that passengers do ask us to dispose of it," Davis said.

If people choose to keep it, a report is written. "Not even a full-blown report, it's just a log entry," Davis said. Police will let the passenger know that transport isn't prohibited, but cannabis is still illegal federally.

"Although it is illegal to travel out of state (with marijuana), it's not my intent to interdict that," he said.

The department had discussed the policy with the FBI, the federal agency that would pursue a possible marijuana case, he said.

"When we investigate, we go much broader, we go much larger. We're really looking for the drug traffickers as opposed to someone who's bringing in a couple of joints," said Staci Feger-Pellessier, spokesperson for the FBI's Anchorage division.

TSA spokesperson Lorie Dankers said the Anchorage police policy was "consistent" with the TSA's, which leaves it up to local law enforcement to decide whether to take action.

[In Fairbanks, new marijuana shops struggle to keep up with demand]

Dankers said a statement from the Fairbanks International Airport issued Friday erred in saying that TSA did not allow marijuana beyond the security checkpoint.

"We have no horse in that race, if you will," Dankers said.

"It is law enforcement's discretion that determines whether the marijuana will be allowed to travel with the passenger," Dankers wrote later.

In Fairbanks, Martines said the airport's TSA staff had a "longstanding" policy not to allow marijuana through security.

On its website, TSA says the "final decision" regarding what makes it past the checkpoints is up to TSA. The idea that it's up to local law enforcement is "contrary to reality," Martines said.

After a meeting with TSA on Monday afternoon, the Fairbanks International Airport police would likely be shifting its policies, Martines said.

"I have a feeling that we're going to go on the same page as the rest of the country, which is you can fly out with it, just at your own peril," Martines said.

Angie Spear, division operations manager at the Fairbanks International Airport, said what happened in Berardi's case "was not consistent with (TSA's) stance and they are internally reconciling that."

The Fairbanks airport just became aware of Anchorage's policy on marijuana on Friday, Spear said, and now the two airports are on the same page.

"There's just a lot of confusion with the new laws and it'll get reconciled," Spear said.

In response to questions about in-state travel of marijuana and questions regarding Berardi's case, Alaska Airlines spokesperson Ann Zaninovich wrote Monday that the airline follows federal regulations as mandated by the Federal Aviation Administration. In May, the airline said only that it was evaluating its policy.

Competing laws can be hard for law enforcement to navigate, Davis said.

"I think it's very difficult for the officers in the street," he said. "They're sworn to uphold all laws — federal, state and local."

Still, marijuana legalization hasn't affected Anchorage airport police as much as Davis anticipated. Davis had expected to see a spike in cases where people tried to bring a large amount of marijuana (more than the 1 ounce state limit) through security, but a jump in cases hasn't happened, he said.

"I actually thought it would be a lot worse, but it hasn't impacted us that much," Davis said of legal marijuana.

For the state's part, the Department of Law has not weighed in on police action regarding in-state travel with marijuana, said John Skidmore, director of the criminal division of the Alaska Department of Law.

"To my knowledge, no law enforcement agency has requested such advice," Skidmore said.

The department has only provided guidance to law enforcement on the issue of returning surrendered marijuana — police are advised to have a court order before releasing the cannabis.

"It's a violation of federal law for (officers) to give someone a controlled substance," Skidmore said; a court order allows for the release.

"The state was not interested in spending taxpayer money in something that could be resolved amicably," he said.

"There was no basis under Alaska law to seize and then refuse to return the marijuana," Welch said.

But it's a relatively new area of law, Welch said. "I think it's an unsettled and an unanswered question and it hasn't' been addressed (in Alaska) yet," she said.