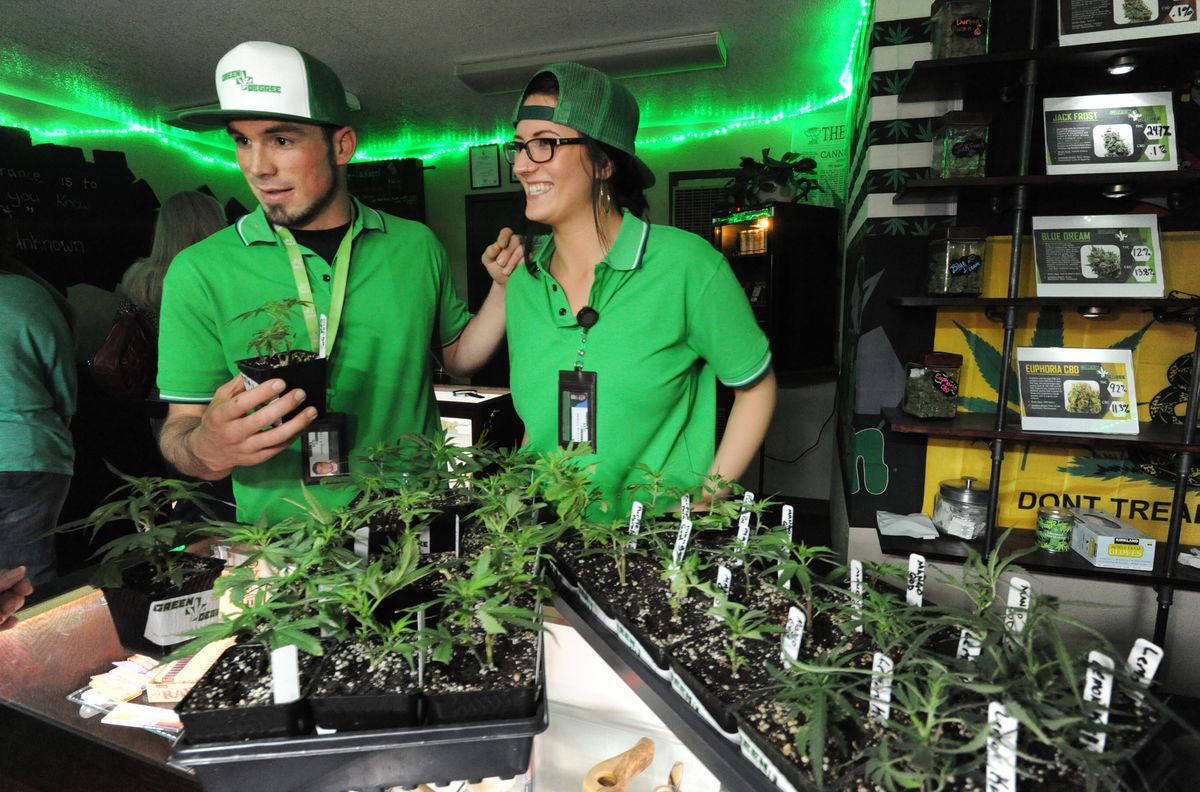 The day was primed for a party.

But Green Degree canceled a planned celebration in the latest example of Alaska's still-evolving cannabis regulations.

The state notified businesses, including Green Degree, that 4/20 celebrations that might advertise or promote marijuana aren't allowed by statute.

That music, bouncy house and food truck on the grass next door to the store on Thursday?

"We're not part of this," employee Jesse DeMarco Mazzella said as people hung out on the grass, chatting or chowing down on food from the Two Girls and a Grill truck nearby.

The business doesn't own the land. A neighbor does. It was his party.

"We had to opt out to respect the Marijuana Control Board," Mazzella said.

The statute at the center of the decision says a retail marijuana store can't "use giveaway coupons as promotional materials, or conduct promotional activities such as games or competitions to encourage sale of marijuana or marijuana products."

The language that follows "such as" isn't a restrictive list, according to Erika McConnell, director of the state Alcohol and Marijuana Control Office.

"Thus I and my staff are in the position of interpreting the scope of 'conduct promotional activities,' " McConnell wrote in an email Thursday. "There is no obvious bright line."

Staffers consulted with the office's attorney and "created a line" until the state Marijuana Control Board can come to a decision on the issue at its May meeting.

Marijuana business consultant Sara Williams said the state notified a Fairbanks business they could run afoul of the law for "giving away a hoodie as part of their 4/20 event."

Williams said she attended a Marijuana Control Board meeting during which the promotional regulation came up. At that time, she said, the overriding concern seemed to be things like joint-rolling contests.

"But a food truck and live music — are you kidding me? That's really overreach," Williams said.

Growers in Mat-Su say they were already behind the rest of the state because of politics.

A May 2016 Matanuska-Susitna Borough moratorium froze the state licensing process for grow operations here, as well as licensing for retailers and one of the state's few testing labs. Marijuana businesses hustled back to life in October when voters defeated a pot ban here.

[Mat-Su marijuana businesses scramble back to life after ban fails]

Ron Bass at Calm N Collective, a large-scale grower, is in Houston, so he could get up and running sooner than cultivators in unconsolidated parts of the borough. The cities of Palmer and Wasilla banned marijuana businesses.

Bass said his product hit shelves at nearly 10 stores on Thursday, including Green Degree and several other shops in the Valley and in Anchorage.

As far as Thursday's holiday, Denali 420 in Houston wasn't doing anything special, a manager said.

But celebrations of what another retailer called "Halloween for the weed world" popped up all over Anchorage: glass blowers, dancers, music and clothing "giveaways" for a penny.

At Green Degree, about 20 people stood in line before the store opened at 11 a.m. Thursday. Most people at the party didn't want to talk to a reporter. Marijuana is still illegal on the federal level, one said.

Deirdre Miller, a 35-year-old from Palmer with her own leather crafting business, drank from a bright blue Red Bull smoothie and waited to go inside the store.

Owners limited the flow to three people per the four "budtenders" working the dimly lit, humid back room. Customers could pick from seven or eight strains ranging from 9 to 24 percent THC at upward of $25 a gram.

Miller, who says marijuana helps her cope with bipolar disorder and a torn rotator cuff, was hanging out with friends on the grass around noon Thursday before her turn to go in.

"I heard the festival was canceled," she said. "I'm glad to see it's not."