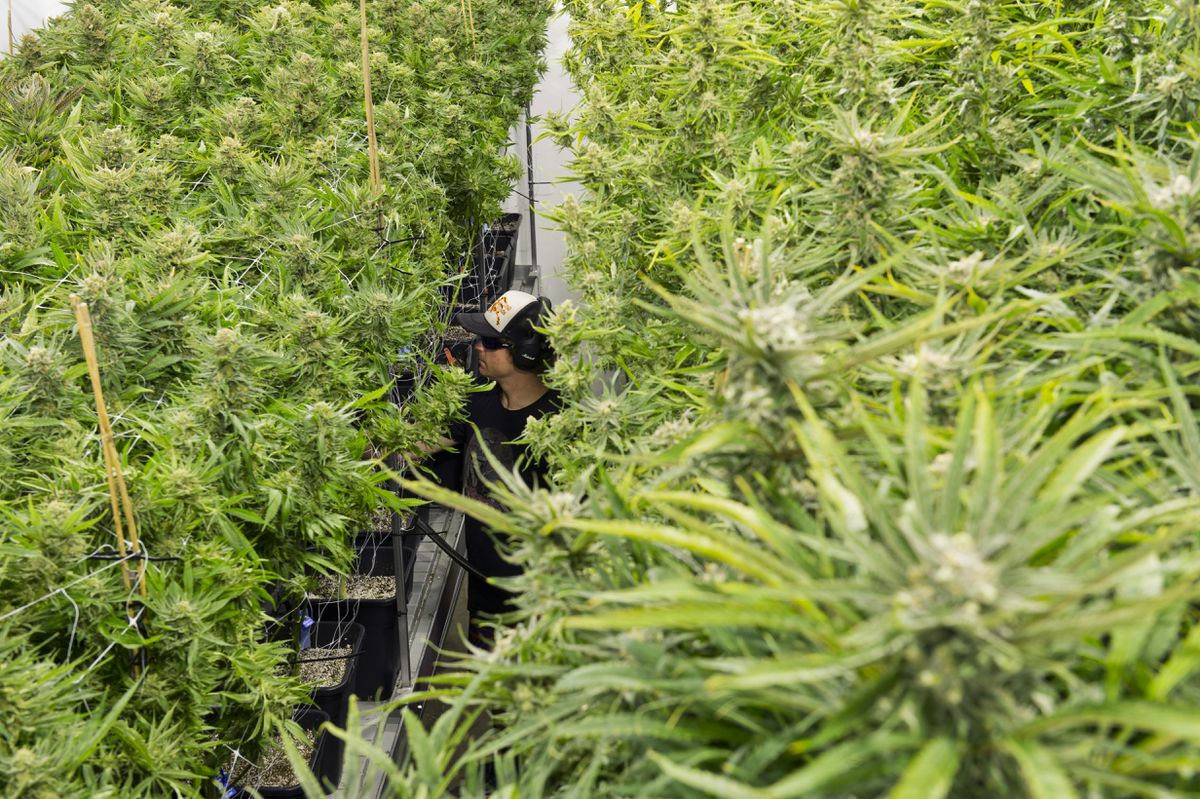 On Oct. 3, local elections in three Alaska jurisdictions will decide whether or not marijuana businesses are allowed to keep operating.

Voters in the city of Fairbanks, the Fairbanks North Star Borough, and the Kenai Peninsula Borough all face the question of whether the cannabis industry should stay or go.

Should the measures pass, all marijuana businesses – stores, grows, manufacturing facilities and testing labs – would be banned from operating in the respective areas.

Personal use will not be affected. All Alaskans over the age of 21 can grow up to six plants in their home and carry an ounce of marijuana on them at one time.

When Alaska voters legalized recreational cannabis in 2014, the ballot measure included an option for communities to opt out of the marijuana industry. Local governments can vote to ban businesses, and voter initiatives can take the question back to the ballot.

All three initiatives were put on the ballot by petition signatures. And all had hoped to bring the issue on last year's ballot, but missed the deadline.

Many of the arguments on both sides have remained the same since the original vote. Marijuana businesses are advocating for safe access, especially for those who may be sick or unable to grow cannabis. Those wishing to ban the cannabis industry argue that there are potential health costs and public costs that outweigh the benefits.

Both sides want the black market to dwindle, but disagree on how and whether legal marijuana affects that.

In Fairbanks, two separate measures will be voted on in the city and the borough. The city of North Pole, where a similar ban passed last year, will not be affected by the outcome of the election.

Fairbanks is home to the most cultivation facilities in the state. In July, 12 growers within the borough paid taxes out of a total of 46 across Alaska.

Fairbanks was an early hot spot for the industry, and the 2014 ballot initiative was popular with Fairbanks voters, the Fairbanks Daily News-Miner reported at the time.

"We certainly are the underdog," said Jim Ostlind, chair of the campaign leading the initiatives for both the city and borough, "Safe neighborhoods Fairbanks – Yes on A and 1."

The group says it is focused on keeping marijuana businesses out of neighborhoods, a message some in the marijuana industry say is misleading.

"The inference that you can just open a pot shop anywhere is wholly inaccurate," said Karen Bloom, chair of the "Keep Cannabis Legal Fairbanks" campaign and co-owner of the cannabis cultivation facility Alaskan Blooms.

In Fairbanks, marijuana businesses are not allowed in residential zones but are allowed in general use zoning and a few other areas, like agricultural zones. A few people who live in those areas where cannabis cultivators have started operating have complained about the smell.

If both Fairbanks bans pass, it would likely affect the rest of the state's marijuana market, given the sheer number of cultivators in the Interior.

"It will bottleneck the supply chain, because there's already a shortage, so it will just further cripple the industry," Bloom said.

While Fairbanks voted overall in favor of the marijuana industry in 2014, Bloom said that she's spoken with many people who didn't realize that the issue is back on the ballot.

"From a business perspective, having your business shut down based on the words of the few, from the fear of a few, it's almost archaic. … Do people need to be good stewards of their neighbors? Absolutely," Bloom said.

Those in support of the ban say that marijuana businesses have always known there is a risk that they could be shut down through local bans.

Bloom called that attitude "cavalier," and said it would be "tragic" for business owners to lose their livelihoods.

Meanwhile on the Kenai Peninsula, voters will also head to the polls in October with a decision to make on marijuana. Mlynarik, chair of the state's Marijuana Control Board, gathered signatures to get the ban on the ballot. Last year, a state assistant attorney general said that he hadn't committed any ethics violations in doing so. Conflict of interest concerns only arise in Alaska's Executive Branch Ethics Act when there's a significant financial interest.

In 2014, the vote on legalized marijuana was much closer there than in Fairbanks, with varying results by district, the Peninsula Clarion reported at the time.

Cities in the borough, like Kenai and Homer, won't be affected by the outcome. In Soldotna, the city council introduced an ordinance in late August that would ban the marijuana industry, KDLL public radio reported. It will be up for public discussion in mid-September.

Blain Gilman, a former Kenai Peninsula Borough assembly member, is the spokesperson for the group sponsoring the initiative. Unlike in Fairbanks, the group has not filed with the Alaska Public Offices Commission. He said there's been no need; they haven't spent any money.

"My largest focus is teenagers and children," Gilman said. "I think it's a very harmful substance for children."

Amy Jackson is the chair of the "Keep Cannabis Legal" campaign in Kenai. Jackson does not own a marijuana business.

"Through the years I have learned the facts, the truth about the benefits of cannabis. … I'm tired of it being vilified," Jackson said of why she is leading the campaign.

"I'm also for individual rights," Jackson said. "I don't think the government or any other adult should be able to tell me what to do with my body."