‘Thank you, God, for the weed’: Pot churches proliferate as states ease access to marijuana 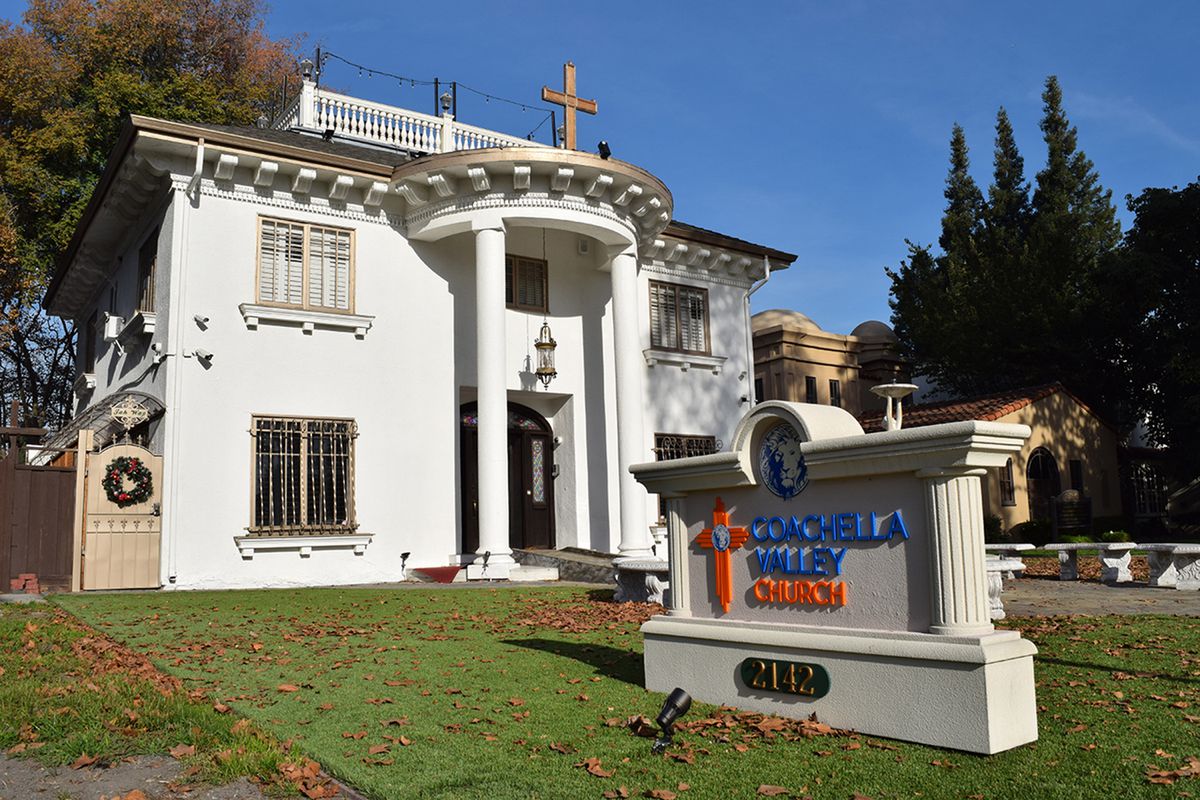 The Coachella Valley Church in San Jose, Calif., which offers marijuana as a “sacrament,” is among a growing number of similar churches nationwide. The churches are vexing local officials, who contend they’re simply marijuana dispensaries in disguise, operating outside of the regulations that govern other providers. (Barbara Feder Ostrov/Kaiser Health News/TNS)

The Coachella Valley Church in San Jose, Calif., which offers marijuana as a “sacrament,” is among a growing number of similar churches nationwide. The churches are vexing local officials, who contend they’re simply marijuana dispensaries in disguise, operating outside of the regulations that govern other providers. (Barbara Feder Ostrov/Kaiser Health News/TNS)

SAN JOSE, Calif. — Services at the Coachella Valley Church begin and end with the Lord's Prayer.

In between, there is the sacrament.

"Breathe deep and blow harder," intoned Pastor Grant Atwell after distributing small marijuana joints to 20 worshippers on a recent Sunday afternoon. "Nail the insight down, whether you get it from marijuana or prayer. Consider what in your own life you are thankful for."

A middle-aged man wearing a "Jesus Loves You" baseball cap piped up. "Thank you, God, for the weed," he called out. "I'm thankful for the spirit of cannabis," a woman echoed from the back. "I am grateful to be alive," said another young woman, adding that she had recently overdosed – on what, she did not say – for the third time.

The small room, painted black and gold and decorated with crosses and Rastafarian symbols, filled with pungent smoke after an hourlong service of Christian prayers, self-help slogans and inspirational quotes led by Atwell, a Campbell, Calif., massage therapist and photographer.

Despite its mainstream Christian trappings, the Coachella Valley Church describes itself as a Rastafarian church, something that's tough to define. Rastafari is a political and religious movement that originated in Jamaica. Combining elements of Christianity, pan-Africanism and mysticism, the movement has no central authority. Adherents use marijuana in their rituals.

The church's leaders say they believe that religious freedom laws give them the right to offer marijuana to visitors without a doctor's recommendation – and without having to abide by any other regulations. Some courts and local authorities beg to differ.

As more states ease access to marijuana, churches that offer pot as a sacrament are proliferating, competing with medical marijuana dispensaries and even pot shops in the few states that have legalized recreational weed.

While some of them claim Rastafari affiliation, others link themselves to Native American religious traditions.

The churches are vexing local officials, who say that they're simply dispensaries in disguise, skirting the rules that govern other marijuana providers, such as requirements to pay taxes.

In California, which legalized medical marijuana in 1996 and, as of New Year's Day, now allows sales of recreational marijuana, churches tied to marijuana use have recently popped up in Oakland, Roseville, Modesto, San Diego County, Orange County, Los Angeles County and the Southern California desert city of Coachella (no connection to the San Jose church). A few have been shut down by law enforcement.

"I'm not going to say they're not churches, but to the extent that they're distributing marijuana, they're an illegal dispensary, in my view," said San Jose City Attorney Rick Doyle. Doyle has requested a permanent legal injunction to stop the Coachella Valley Church from providing marijuana, and a court hearing is scheduled for Jan. 22. He recently got a court order to shut down operations of a similar church, the Oklevueha Native American Church of South Bay, he said.

Nationally, such churches have opened in Indiana, where marijuana remains illegal, and Michigan, where medical marijuana is allowed. Even in Colorado, which legalized pot in 2012, the "International Church of Cannabis" is testing the limits of state and city rules on consuming marijuana in public.

Marijuana churches typically require people to purchase a membership, then give or sell them marijuana and related products. They may ask for ID such as a driver's license but don't require a doctor's recommendation or medical marijuana identification card.

They're relying on court rulings that made it possible for some groups, including Native Americans, to use federally banned drugs like peyote in their religious ceremonies. (A coalition of Native American churches has disavowed Oklevueha churches that claim marijuana as their sacrament.)

Despite these rulings, courts have thus far rejected religious groups' right to use marijuana, which is still illegal at the federal level, according to Douglas Laycock, a University of Virginia Law School professor specializing in religious liberty issues.

"Marijuana churches have brought religious liberty claims for years, and they have always lost," Laycock said. "Marijuana is a huge recreational drug, and a religious exception … would make enforcement nearly impossible. So the courts have always found a compelling government interest in marijuana enforcement."

"Legalization changes everything," he said. "Religious use may not violate state law in some of these states. And if it does, legalizing recreational use but not religious use clearly discriminates against religion."

In California, however, the Coachella Valley Church may not be able to offer its potent sacrament for much longer.

Church leaders at first agreed to be interviewed but then did not respond to subsequent emails from California Healthline. A man who was videotaping the recent Sunday service said the church opened in May. The man, who gave his name as Dryden Brite, also goes by Xak Puckett, and has been described in media reports as a former director of Amsterdam's Garden.

"The message is really strong and powerful," Puckett said of the church. "People are craving something new."

He described the back room where marijuana products were sold to members as the church's "gift shop," then declined to answer further questions.

About half of the churchgoers left the black-and-gold worship room immediately after receiving their sacrament, with some heading straight to the gift shop to stock up.

Others remained to finish their joints and chitchat. The man sporting the "Jesus Loves You" cap lingered. He had brought along his dog, Spartan, and a shofar, a ram's horn used in some Jewish ceremonies, which he blew loudly at the end of the service.

"Anytime the word of God is being preached, it's a good thing," said Mark, a 57-year-old who declined to give his last name.

Marco, a 29-year-old veterinary technician from San Jose who also declined to give his last name, attended with his husband. He has a medical marijuana card and said marijuana helps him with bipolar disorder, depression and anxiety. He grew up Catholic and felt that the Roman Catholic Church disapproved of his sexual orientation and marijuana use.

"Honestly, this has been the most life-affirming church I've ever been to," Marco said. "Here there are true believers in cannabis — if not the faith."

(Kaiser Health News is a national health policy news service. It is an editorially independent program of the Henry J. Kaiser Family Foundation.)