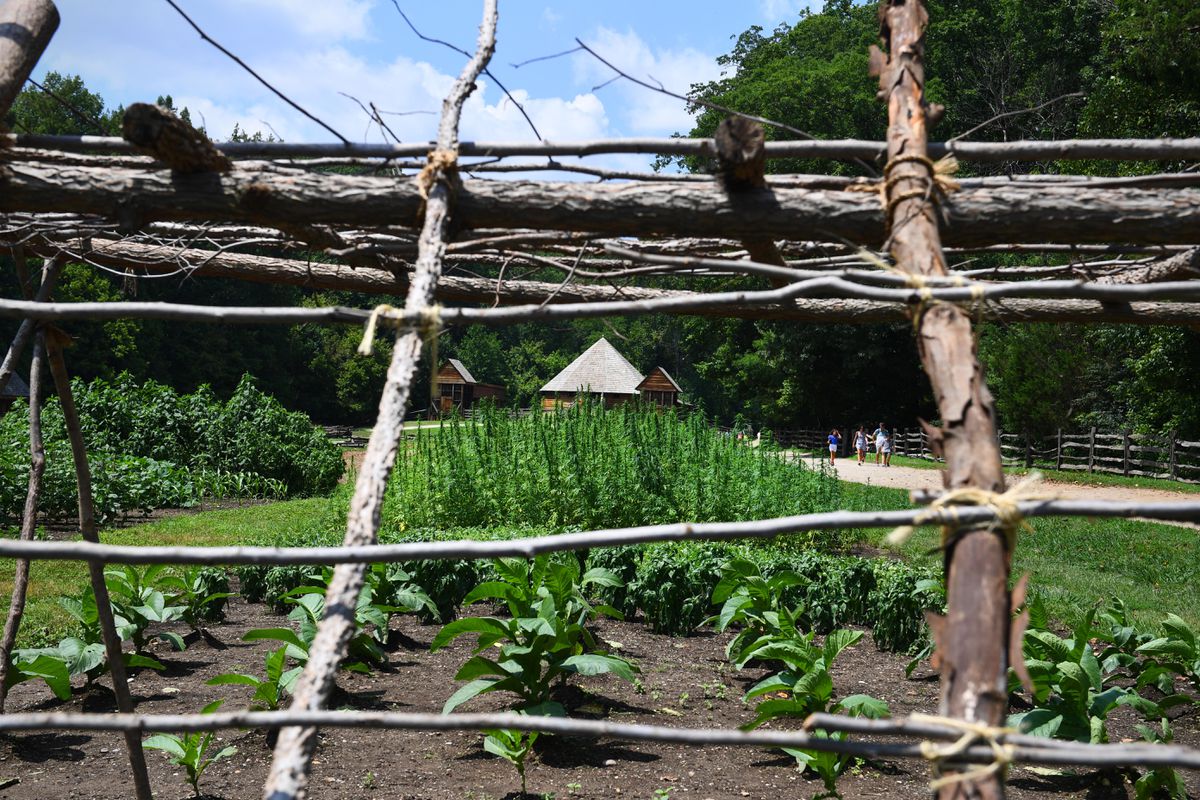 Dean Norton, director of horticulture at George Washington's Mount Vernon, pulls out his cellphone and cranks up some Jimi Hendrix music as he walks toward the cannabis patch on the founding father's estate.

The "weed" is tall, planted in tight rows and has the serrated leaf edges of your classic ganja.

As Hendrix's 1968 epic "Voodoo Child" drifts from the phone, Norton jokes about having a suitable vibe for the plot. "We should have a speaker in the middle," he says. "Would people go nuts? "

But this is not that kind of hemp. You don't smoke this stuff. This is raised for its fiber. It's industrial hemp, the kind Henry Ford sought to build cars with. And Mount Vernon has started growing it because George Washington did.

The landmark home of the nation's first president, about 20 miles south of Washington, is part of an effort to return industrial hemp to its historical context and promote its use in the modern world.

Industrial hemp, while cannabis, is far different from its marijuana cousin.

While both contain tetrahydrocannabinol, THC, the substance that's creates the "high," industrial hemp contains only tiny amounts of THC and has no psychoactive effect,experts say.

Recreational marijuana has roughly 10 to 30 percent THC in its dry weight of flowers, said Michael Timko, professor of biology and public health sciences at the University of Virginia. Industrial hemp has .3 percent or less.

But the industrial strain, which was widely grown in colonial Virginia to make fiber for rope and other products, became lumped over time with the recreational strain. And both were stigmatized and suppressed in the early 20th century.

"You have different strains for different things," Norton said recently as he stood near his hemp patch, down the hill from Washington's famous manor house. "They've really been able to come up with . . . really strong fiber plants, really strong oil plants and really strong recreational plants."

"But that's not what we're doing here," he said. "This is totally for interpretation purposes. . . . You could a build bonfire with this, sit around it, breathe it, nothing's going to happen."

"The funniest thing is the people that are familiar with hemp, or the other," he said. "They stop. They look. They go take pictures. [They'll say] 'Remember the old VW bug we had.' It's always a VW. It's great. It's really fun to watch the people that know."

Industrial hemp was an important crop in colonial times. A sailing ship could require thousands of feet of hemp rope for its rigging, Norton said.

Hemp "is abundantly productive and will grow for ever on the same spot," Thomas Jefferson wrote of it.

Jefferson invented a special hemp "break" for processing it. He wrote that he used hemp "for shirting our laborers" – his slaves – because cotton was too expensive.

In the 1700s, it was so valuable that Virginia paid farmers to grow it. Washington took advantage of that, writing in 1767, that he "applied to the fund for giving a Bounty on Hemp."

He planted it in abundance, especially in one tract he called Muddy Hole.

But it was a labor-intensive crop.

The outside fiber had to be separated from the inner core, or "hurd."

It had to be pulverized, then soaked in water or dew, to help in the extraction. But when the process was completed, the fiber was long and strong.

The idea to return hemp to Mount Vernon came from Brian Walden, 37, a farmer in Charlottesville, who got the notion after a 2014 federal law cleared the way for academic research into industrial hemp cultivation, he said in a telephone interview.

Farmers were permitted to grow it if they joined a research program and partnered with a university that wanted to study industrial hemp, he said.

He connected with the University of Virginia. He "donated land, equipment, expertise," he said, and began to grow it locally.

Last year, he came up with a hemp plan for Mount Vernon, to boost the crop's image and illustrate its role in history. Norton was hesitant at first, but agreed this year. The first seeds were planted June 13.

The 6o-day crop should be ready for harvest soon, Walden said.

A similar plot has been planted at Montpelier, the Orange County, Virginia, home of founding father James Madison.

But in the 20th century, with the rise of the recreational strain, all hemp became stigmatized. "They clumped them all together," Walden said.

(Medicinal use of hemp/marijuana has been traced back to 1576, when it was recommended for use in treating an unstable Prussian duke, according to historian H. C. Erik Midelfort.)

In 1937, a huge "marihuana" tax was placed on hemp that "made every farmer drop it like a dime," he said.

But in the 1940s, some production returned because of the wartime need.

In 1942, the Agriculture Department produced a 14-minute film, "Hemp for Victory," urging farmers to grow it again.

For the sailor and the hangman, it had been indispensable in the past, the narrator declared. Now it was needed for shoe thread, parachute webbing, and 30,000 feet of rope for every battleship.

And in 1941, Henry Ford reportedly produced a short-lived "hemp car" with a body partly made of a hemp-derived substance.

But after the war, with the resurgence in use of the recreational kind, industrial hemp production fell back into disfavor.

Today, 15 states still ban industrial hemp cultivation, according to the National Conference of State Legislatures. The other states allow its growth for commercial, research or pilot programs.

Congress is considering a bill that would legalize industrial hemp cultivation, Walden said.

But the United States remains far behind other countries in taking advantage of industrial hemp's potential.

"The U.S. is one of the few developed nations that hasn't looked at the use of hemp as a green, sustainable resource for any number of purposes," said Timko, of the University of Virginia, the scientist who partnered with Walden.

"It wasn't as if they didn't know there was an industrial use," he said. "It's just that the federal government couldn't figure out how to separate it easily."

Industrial hemp is grown extensively in Europe, China and Canada, he said. The United States imports more than $500 million in hemp products a year. It's used for clothing and backpacks, oils and additives, and in plastics.

"Why aren't we growing that $500 million worth of hemp products?" he asked. "Why are we importing it?"

Americans "should learn that we grew industrial hemp . . . and it was really part of the culture that we've lost," he said.