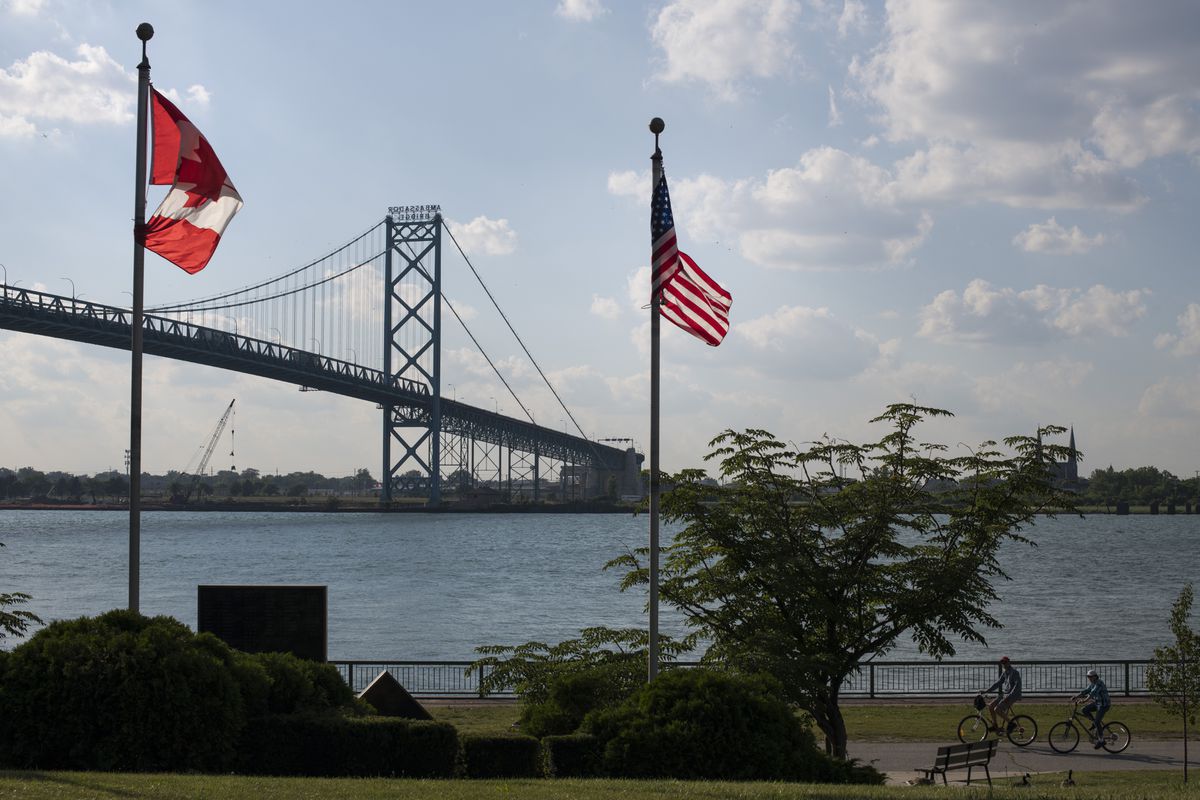 The Ambassador Bridge, which connects Windsor, Canada, and Detroit. In October, recreational marijuana will become legal in Canada, presenting a challenge for U.S. officials at the border, where possession of the drug violates federal law. (Photo by Brittany Greeson for The Washington Post)

The Ambassador Bridge, which connects Windsor, Canada, and Detroit. In October, recreational marijuana will become legal in Canada, presenting a challenge for U.S. officials at the border, where possession of the drug violates federal law. (Photo by Brittany Greeson for The Washington Post)

Canadians about to enjoy newly legal marijuana - and even investors in the sector - could face new headaches at the U.S. border.

Border guards have broad power to question Canadians on their current and past drug use, immigration experts say. They could declare users inadmissible - perhaps for life. U.S. officials also warn that any form of participation in the sector could likewise cause someone to be turned away, signaling potential problems for investors.

Canada is scheduled to legalize recreational use of the drug on Oct. 17, but it is still illegal under U.S. federal law, despite major states like Colorado and California loosening restrictions. Justin Trudeau's government and travel agents are warning Canadians to make sure they have no trace of the drug in their cars or luggage.

"Working or having involvement in the legal marijuana industry in U.S. states where it is deemed legal or Canada may affect an individual's admissibility to the U.S.," Mike Niezgoda, a spokesman at the U.S. Customs and Border Protection office in Buffalo, said in an email.

Similar comments made by a border official to Politico sent U.S.-traded shares of Canadian marijuana companies tumbling Thursday. Cannabis stocks have been soaring since mid-August, when Canopy Growth Corp. announced a C$5 billion ($3.8 billion) investment from Constellation Brands Inc., the biggest deal in the sector to date.

"A lot of people don't understand that they are still going to have problems after legalization," said Henry Chang, a partner at Blaney McMurtry LLP in Toronto who handles immigration law on both sides of the border. "You need to stay off the radar - if there's something that prompts them to think that you are a marijuana user, the first question will be: 'Do you smoke marijuana?'"

Those at risk include people in border towns who frequently cross over to buy gas or milk, tourists and transport workers who haul billions of dollars a month of goods into the U.S. Even executives at weed companies could be accused of bringing the trade where it's not welcome.

The rub is that it's illegal to have smoked the drug in Canada before Oct. 17, and it's illegal to lie to any border agent who asks about it. Some 4.6 million Canadians - about 16 percent of the adult population - use weed.

“Although medical and recreational marijuana may be legal in some U.S. States and Canada, the sale, possession, production and distribution of marijuana remain illegal under U.S. federal law,” Niezgoda said.

Another official said those participating in the marijuana business may be turned away at the border. "Facilitating the proliferation of the legal marijuana industry in U.S. states where it is deemed legal or Canada may affect an individual's admissibility to the U.S.," Todd Owen, executive assistant commissioner for the Office of Field Operations at the U.S. Customs and Border Protection agency, told Politico in comments published Thursday.

Although Owen didn't specify any minimum level of investment, he signaled that the focus was more on those bringing the sector to the U.S., which could have implications for the burgeoning sector. Until his comments, the BI Canada Cannabis Competitive Peers index had gained nearly 50 percent since the Canopy-Constellation deal was announced. Individual stocks have posted more outsize gains, with Tilray Inc. up more than 600 percent since its July IPO.

Canadian Public Safety Minister Ralph Goodale has often said he's working with U.S. law enforcement to clarify the changes and make sure the border remains smooth. The advice of Goodale and Trudeau is to be honest at the border - and to make sure you're not carrying.

"Despite one-in-eight Canadians using cannabis today, 400,000 people move between our two countries every day almost entirely without incident," Goodale spokesman Scott Bardsley said by email. "Officials from the United States have said that they do not plan on changing their questions at primary inspection after cannabis is legalized in Canada."

The government is also ramping up advertising reminding Canadians of their obligations to obey the laws of both countries. That message hasn't "fully sunk in" yet, especially with more casual tourists, said Continental Travel Group President Daryl Silver.

Overzealous border agents could encourage even more Canadians to stay home, at a time when President Donald Trump is targeting the country in trade negotiations. "We already notice somewhat of a trend of some people not going to the U.S.," said Silver. "This could add to that."

Canadians spent $19.8 billion on tourism south of the border in 2016, according to the International Trade Administration. The figure was $27.2 billion in 2014, when the country's currency was close to par with the greenback.

"People are careless and I think people will be caught by accident and this will create problems," said Lorne Waldman, an immigration lawyer. "No lawyer could counsel anyone to lie to a border agent, but if an agent asks the question, I suppose they could decline to answer."

That may be tricky for people who work in the marijuana industry, given that border agents often ask for a visitor's occupation.

Although you may not be denied entry simply for having a job that's legal in Canada, marijuana executives who work with U.S. companies may be seen as being engaged in criminal activity, Chang said. "That you are going to start seeing some problems with - especially if they buy operations or start doing business with a U.S. company," he said.

Bloomberg’s Josh Wingrove and Kristine Owram contributed to this story.