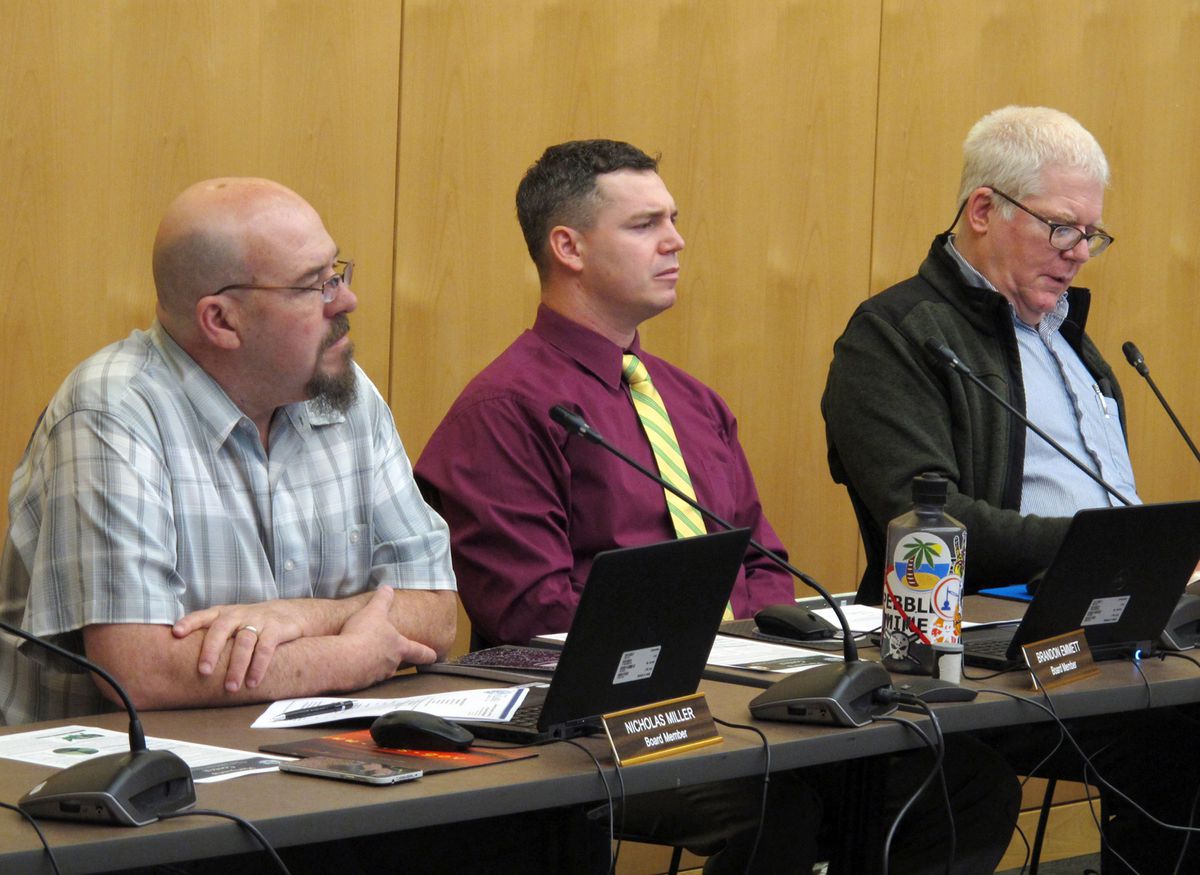 Members of Alaska's Marijuana Control Board listen to public comment during a meeting on Wednesday, Feb. 20, 2019, in Juneau, Alaska. Shown are, from left, Nicholas Miller, Brandon Emmett and Mark Springer. (AP Photo/Becky Bohrer)

Members of Alaska's Marijuana Control Board listen to public comment during a meeting on Wednesday, Feb. 20, 2019, in Juneau, Alaska. Shown are, from left, Nicholas Miller, Brandon Emmett and Mark Springer. (AP Photo/Becky Bohrer)

JUNEAU — Alaska’s new governor has no plans to change marijuana legalization, a spokesman said Wednesday, even as the Republican administration’s appointments and proposal for a state regulatory board worry some in the legal cannabis industry.

Spokesman Matt Shuckerow also said that Gov. Mike Dunleavy has no desire to push the industry in one direction or the other.

Dunleavy has made new appointments to the five-member Marijuana Control Board while also planning to propose repealing its existence.

The board began a three-day meeting Wednesday in Juneau, which was expected to be Emmett's last meeting. Voters in 2014 approved legalizing the use of so-called recreational marijuana by those 21 and older.

Shuckerow said repealing the board would require legislative approval and it's important to have a functioning board as that process plays out. State Commerce Commissioner Julie Anderson has said that Dunleavy intends to propose transferring the board's responsibilities to the commissioner.

Further details on what Dunleavy is planning are expected when he introduces the repeal legislation, Shuckerow said.

Other states handle cannabis regulation at the agency level, and Chris Lindsey, senior legislative counsel with the Marijuana Policy Project, said as long as the agency has a clear mandate and supports the program, everything should be fine.

But Stiver's appointment has fueled uncertainty in the industry, so a proposal like this has left people to "kind of look for the conspiracy," Lindsey said.

The appointment "calls into question everything that the governor might be trying to do now," he said.

Stiver and Lt. Christopher Jaime, an Alaska Wildlife Trooper appointed to the board's public safety seat, are subject to legislative confirmation. Shuckerow has said Dunleavy believes Stiver would bring a valuable perspective to the board.

Jaime was said to be out of state and did not attend Wednesday's meeting. The director of the Alcohol and Marijuana Control Office mentioned Dunleavy's proposal to repeal the board in her report, but the board itself did not delve into the topic.

Lacy Wilcox, who serves on the board of the Alaska Marijuana Industry Association, said Dunleavy should meet with the industry. She worries the public process that has surrounded rule-making so far could be eroded if the board is repealed.

She and others have raised concerns with language in one of Dunleavy's crime bills they say would make it a felony to possess 25 or more cannabis plants, which they argue could affect legal growers. Department of Law spokeswoman Cori Mills has said the provision was not aimed at growers operating under the state's regulated industry and that the administration is open to clarifying the language.

Chase Griffith, who has retail and growing facilities on the Kenai Peninsula, said he's been confused by Dunleavy's actions and wants to hear from him.

“We just need to see the details and actually hear his true intent on the cannabis industry in Alaska,” he said, adding later: “I just want him to publicly say how he stands on cannabis because I haven’t heard that myself.”