Plan for a homeless veterans village in Eklutna takes shape 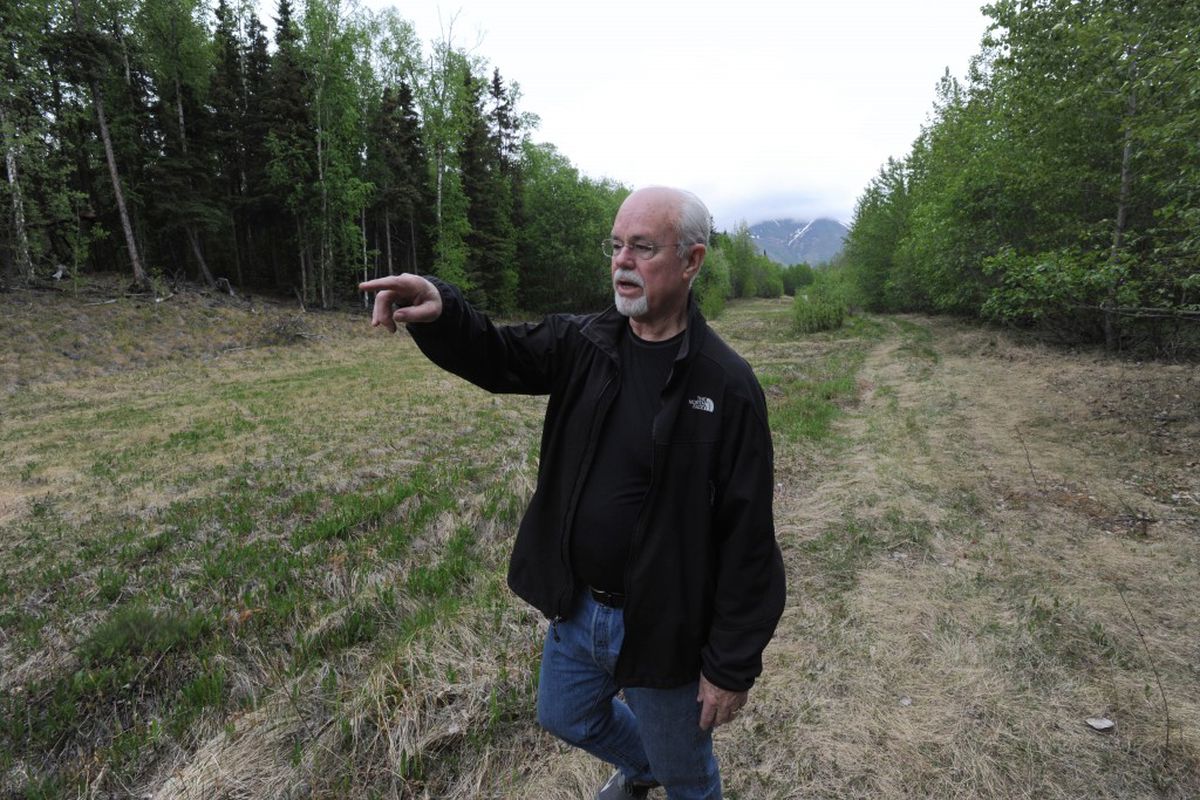 Ric Davidge, chairman and CEO of the Alaska Veterans Foundation, looks at land in Eklutna on May 18, 2016, where he would like to lease and build a cabin village for homeless veterans. (Bill Roth / Alaska Dispatch News)

Ric Davidge, chairman and CEO of the Alaska Veterans Foundation, looks at land in Eklutna on May 18, 2016, where he would like to lease and build a cabin village for homeless veterans. (Bill Roth / Alaska Dispatch News)

In a rural northern corner of Anchorage, a politically connected advocate for Alaska veterans wants to build a cabin village for homeless veterans.

Ric Davidge, the chair of the Alaska Veterans Foundation, has spent the past five years on a proposal that is now in the hands of state lawmakers. His problems are money and land. Davidge has picked out an 80-acre site on land owned by Eklutna Inc., a Native village corporation, though he doesn't have any assurances from the landowner that it will be allowed.

But Davidge is both determined and vocal. Recently, he stood on the property, a wooded stretch of land along the road to Eklutna Lake, and pointed into the trees. He imagined a main building with units and offices, cabins in pods, firewood-packaging and water-bottling businesses, and ways for veterans to contribute to a larger community and pay down housing costs.

"The only thing is, you've got to get up in the morning and go to work," Davidge said.

As Anchorage officials search for ways to find stable housing for people on the streets and in emergency shelters, Davidge is pitching a different model, one that targets former military service members who receive federal benefit payments and are used to more regimented living conditions. He's got the attention of state and local officials and support from the state alcohol industry and social service nonprofits, though it's unclear how close the project is to reality.

'A cabin in the woods'

Davidge's proposal, which he developed with the help of a $300,000 state grant in 2012, calls for a village consisting of a two-story building with 25 apartments, a kitchen, a mess hall and offices. He's using the "housing first" model of long-term supported housing that incorporates services for substance abuse and mental health treatment, but doesn't bar people from drinking — though the expected isolation of the village, Davidge said, will make it difficult to buy alcohol.

At the same time, veterans will be strongly encouraged to work to live in the village. Veterans will be required to contribute one-third of their income, which includes federal grant income, toward housing costs. Not everyone may be physically able to work, Davidge said, but if a resident refuses to attend learning sessions, he or she may not be able to stay, according to the proposal submitted to the state.

"This is not a custodial facility," the proposal says, in bold lettering.

Davidge said he expects the operation to sustain itself after 18 months, through payments from residents and business ventures.

He thinks his model could be more effective for helping veterans stay off the streets. Research and interviews with dozens of homeless veterans found a consistent theme, Davidge said. Veterans did not want to live in converted hotels in downtown Anchorage, near what Davidge referred to as the "Fourth Avenue subculture." Most said they wanted to live in a cabin in the woods.

At the same time, the village structure will offer the camaraderie of a military brigade, Davidge said. While there would be no time limit for staying in the village, Davidge said the hope is that veterans will be able to move on eventually.

He said the investment in the village is worth it. By taking people off the streets, Davidge says, the city and state can save millions of dollars a year.

He is pitching the state for $9.2 million in construction and first-year operating costs. About $7.8 million would cover construction, though Davidge said the federal government, with its concern for veterans, will reimburse the state for about two-thirds of that amount.

While Davidge's proposal has generated strong interest from state and local officials, it has a ways to go. State funding for nonprofits and capital projects has all but dried up. Alaska lawmakers and Gov. Bill Walker say it's extremely unlikely the project will be funded this year, and future years look equally bleak.

In a statement provided by his office, Walker said the proposal needed a bit more work, and that funding will be an issue.

"I appreciate the good work Mr. Davidge and the Alaska Veterans Foundation have done to increase housing opportunities for our state's veterans," Walker said in the statement. "While this project could benefit our veteran population if developed, more information is needed before moving forward. Funding is always a challenge given Alaska's current $4 billion deficit."

Davidge is examining ways to scale back the project, such as building five cabins instead of 25. He's also exploring other ways of funding the project, particularly through private grants.

The roots for the project date back to a task force on homelessness and alcohol abuse convened by Mayor Dan Sullivan in 2010. Davidge served on the task force as a veteran representative.

A Vietnam War veteran himself, Davidge has chaired numerous committees and groups on veterans issues in Alaska. Davidge also worked as the economic director for Sarah Palin when she was mayor of Wasilla and he was the director of development for the Mat-Su Borough and state director of water for the Alaska Hydrologic Survey in the mid-1990s. He served on the transition teams for each of the last three mayors of Anchorage, and on a group convened by Anchorage Mayor Ethan Berkowitz last fall to analyze a potential troop downsizing at Joint Base Elmendorf-Richardson.

Davidge is a past district chairman of the Alaska Republican Party and worked in the U.S. Interior Department under President Ronald Reagan and as an aide to the late Sen. Ted Stevens, R-Alaska. But Davidge is known for working with members of both parties on issues important to him, particularly veterans.

Sen. Bill Wielechowski, a Democrat, helped usher through the grant funding that Davidge used to develop the proposal. Wielechowski said the project seemed worth pursuing, and has a chance of coming to fruition.

"I wouldn't foreclose it," Wielechowski said, though he added, "It's obviously challenging now."

In 2013, Alaska Veterans Foundation, Davidge's organization, reported $101,029 in contributions and grants, according to the latest tax records available. It paid nearly $75,0000 in salaries and compensation, split between two people — Davidge and the foundation's executive director, Paul Sheehan. Income and compensation were much higher than in past years, Davidge said, because he worked on the state grant to develop the veteran village project proposal.

In the village proposal, which is now more than 60 pages long, Davidge casts doubt on estimates from the Veterans Administration that 600 homeless veterans live in Alaska, most of whom would likely be in Anchorage. He said his organization has taken part in homeless counts, which involve entering homeless camps around Anchorage and interviewing people who are living there.

Davidge's estimates line up with city data, that between 80 and 90 homeless veterans live in Anchorage.

The annual 2015 homeless count found 22 veterans living on the streets and 120 who met the definition of homeless. While the city was able to find and house most of those veterans in 2016, the estimated number of veterans on the street this year rose to 29, said Steve Ashman, manager of city public health initiatives.

She said the administration supports any effort to find housing for people on the street. But she said she expected funding to be a challenge.

"I just think it's such a hard economic environment right now for a large-scale, take-things-to-the-next-level project," Burke said.

Land poses another thorny hurdle. With veterans interested in living off the grid, the remoteness of the chosen property, 2 miles off the Glenn Highway up Eklutna Loop Road, is attractive, Davidge said. He also said he wants to keep the village project in Anchorage so it would be about 20 minutes away from the VA, where veterans will go for health care.

Curtis McQueen, the president of Eklutna, Inc., said the Native corporation strongly supports the cause of housing homeless veterans. But he said in an interview in mid-May that Eklutna is not taking a position on Davidge's project. He said Davidge had yet to present his proposal to the Eklutna board of directors.

If the Eklutna property falls through, Davidge said he's hopeful that a neighboring property owned by a private landowner may work out. He said he's also now scoping out land in the Mat-Su Valley.

The next step, Davidge said, is to use leftover state grant funding to pay for an independent review of the project.