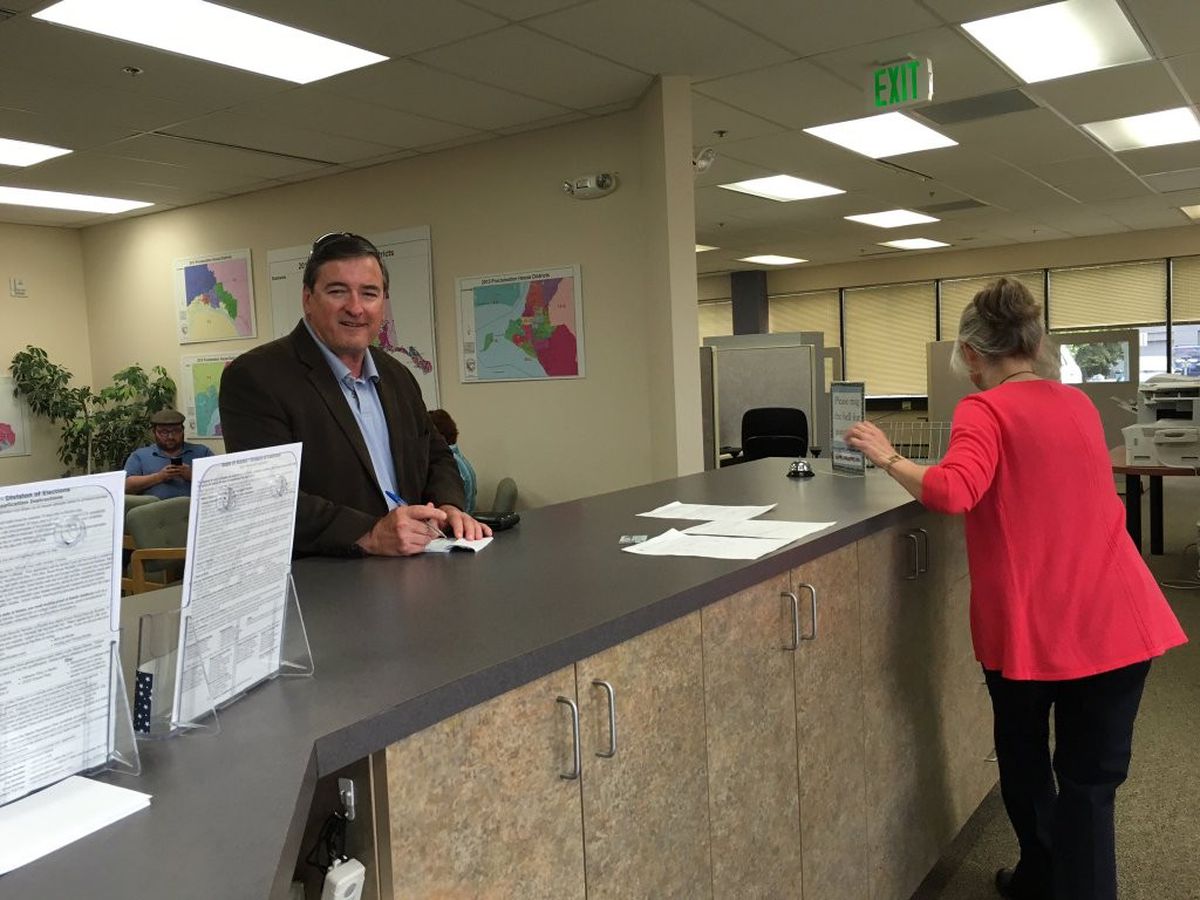 Sullivan, who faced a term limit when he left the top city office after six years last year, was a surprise candidate when he showed up at the state elections office about 10 minutes before the doors closed at 5 p.m, wearing jeans, a polo and blazer.

If he wins, Alaska would have the odd distinction of having two Dan Sullivans serving in the U.S. Senate. The other Dan Sullivan, also a Republican, beat Democrat Mark Begich in 2014. Begich was also a former Anchorage mayor.

Ex-Mayor Sullivan finished filling out his paperwork at the office counter while joking with reporters about lifting Sen. Dan Sullivan's old campaign signs.

The candidate seemed torn about entering the campaign and said he had "been pacing all day, up and down my living room, with my lovely bride Lynette, discussing the pros and cons."

And while he described the race against Murkowski as "David versus Goliath," because of Murkowski's substantial financial lead in the race, he insisted he doesn't plan to sling any rocks Murkowski's way.

Instead, Sullivan said he would focus on being "the candidate that probably best reflects the Republican platform and gives conservative Alaskans a choice … I'm not going to try and call out Sen. Murkowski," he said.

Murkowski has "done a really good job in some areas," but in others she and Sullivan "might have a difference of opinion," but he declined to elaborate on what issues the two split.

"I'm not going to get into me versus her," he said. Sullivan acknowledged, when asked, that he is anti-abortion, an area where Murkowski doesn't always please her party. But he wouldn't offer any other examples of ideological differences between them.

Sullivan said he was prompted to run after phone calls from Republicans looking for an alternative in the primary, "and maybe they feel that I can fill what they feel is a gap," he said. In 2010, then-Mayor Sullivan endorsed Joe Miller, who beat Murkowski in the Republican primary before she won her seat again with a write-in campaign.

But Sullivan did say that his campaign will not be "a big money campaign," saying that "all the special interests have made their commitments to Sen. Murkowski."

As of March 31, Murkowski's campaign had more than $3.3 million.

The candidate following her closest financially is independent Margaret Stock, who had just over $230,000 at the end of March, according to the Federal Election Commission.

Stock, who will bypass primaries, is working on collecting the necessary 2,854 signatures to be on the ballot in November and released her first advertisement on Wednesday. In it, Stock calls herself a "party crasher" and offers a similar message to Sullivan's, decrying "special interests" with a hold on Washington.

Two other Republicans have filed to run for the seat in addition to Murkowski and Sullivan: perennial candidate Thomas Lamb of Anchorage and Bob Lochner of Wasilla.

Neither of Alaska's sitting senators — Lisa Murkowski nor the other Dan Sullivan — were available for comment on Wednesday. Sullivan is currently traveling with a congressional delegation to Myanmar, according to his spokesman Mike Anderson. Murkowski was meeting with Alaskans in Fairbanks, according to her deputy campaign manager Rachel Kallander.

Kallander gave a robust assessment of team Murkowski in an email, and said the campaign is prepared for the primary and "laser focused on a victory in August" so that "Lisa can continue to bring real results home for Alaskan families, our military and communities."

Nathaniel Herz contributed to this story.