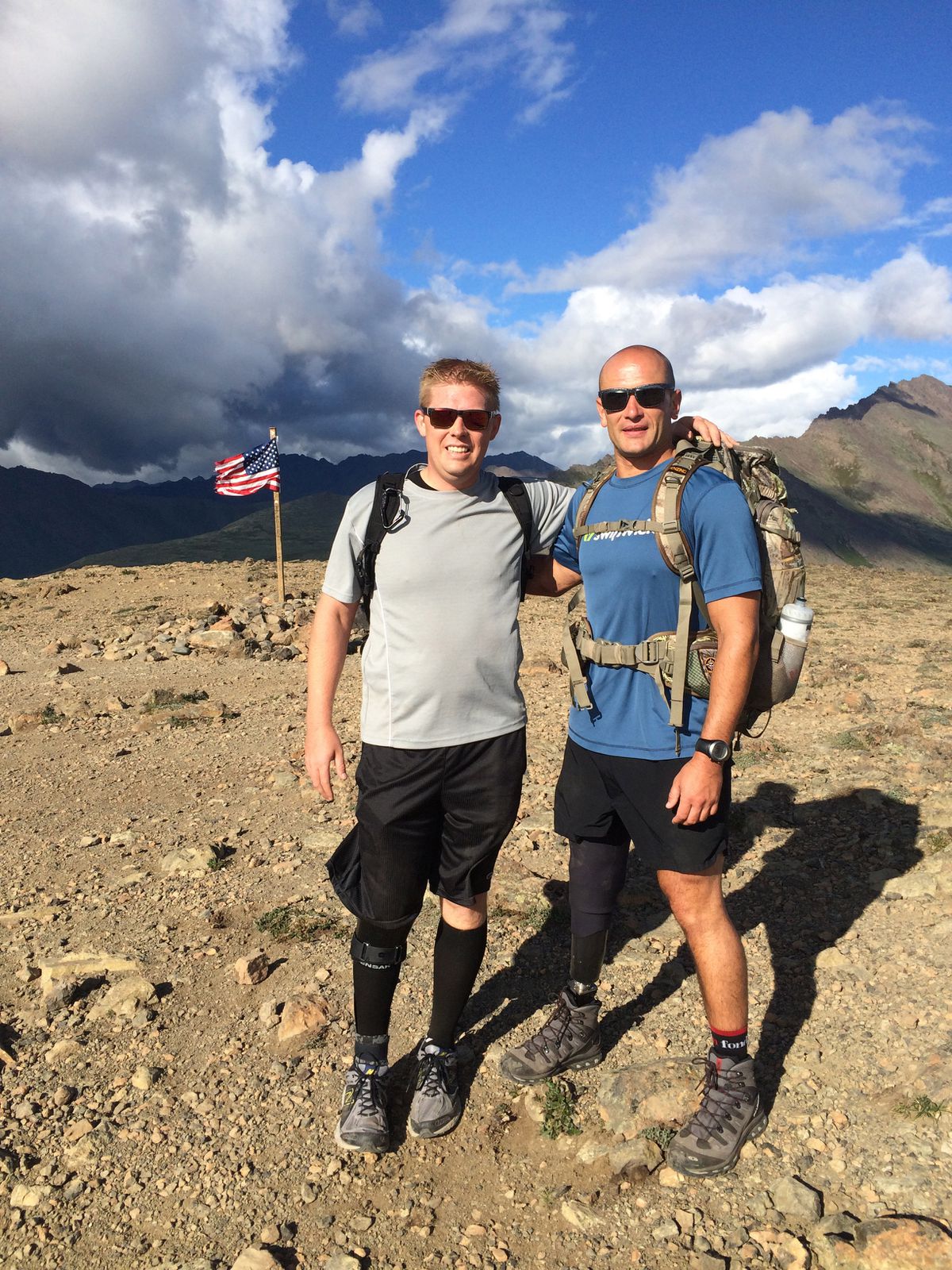 Josh Revak, left, stands with Joe Kapacziewski on top of Flattop last summer, about a month after Revak was fitted with a prostethic device for his right foot. Kapacziewski is an Army Ranger who is still active duty despite losing his leg in combat. He has been a huge inspiration to me, Revak said. (Photo courtesy of Josh Revak)

Josh Revak, left, stands with Joe Kapacziewski on top of Flattop last summer, about a month after Revak was fitted with a prostethic device for his right foot. Kapacziewski is an Army Ranger who is still active duty despite losing his leg in combat. He has been a huge inspiration to me, Revak said. (Photo courtesy of Josh Revak)

It was 10 years ago this month, and the Anchorage man and his roommate with the 1st Armored Division, Sgt. Terry Lisk, were serving as a combat escort for a support group hauling concrete barriers to build an outpost.

They arrived in Ramadi and exited their Humvee. Commanders moved and spoke freely. A reporter from The New York Times was nearby. The area was secure.

A mortar shell ended the serenity. It fell 100 meters in front of the group.

Revak, then 25, reached for the Humvee's driver-side door handle. Lisk, 26, climbed atop the vehicle to resume his position as gunner.

Revak's head pounded amid the chaos. He tried to step into the Humvee, but his legs buckled. He limped instead. Lisk, meanwhile, had been knocked to the ground and lay yards from Revak's mangled feet.

Revak began blindly bandaging his wounds, never looking down to assess the damage. A quarter-sized piece of shrapnel had torn through his right ankle, leaving about a 4-centimeter hole. His left Achilles tendon was severed halfway through. Revak removed the boot from his right foot and wrapped the only field dressing he had around the foot. He fashioned a bootlace into a crude tourniquet for his left foot.

"And then I saw our lieutenant colonel kind of dive through this dust and give aid to my roommate," he said.

Lisk was killed when a chunk of the mortar shell hit him. Once Lisk had been extracted from the area, Revak opened the Humvee door and yelled for assistance. Doing so, he "flopped" his foot out of the truck. The wound was leaking.

Revak made it out, bellowing "Amazing Grace" as he was transported to an aid station.

On Saturday, just short of the 10-year anniversary of the June 26 attack, Revak will make his marathon debut in Duluth, Minnesota, where he graduated from high school in 1999.

He'll toe the starting line of the 26.2-mile Grandma's Marathon thanks to a prosthetic device called the Intrepid Dynamic Exoskeletal Orthosis.

After the mortar attack, Revak was airlifted to Landstuhl Regional Medical Center in Germany, where a surgeon warned him he might lose his right foot.

But the surgeon opted to sew shut the opening on Revak's ankle, content to see what happened before committing to amputation. Ultimately, bone was removed from Revak's pelvis and used to fuse the ankle. He is called a limb-salvage patient by the Department of Veterans Affairs.

Pain, acute and often debilitating, persisted. Revak limped around the best he could, but his mobility was curtailed.

He first heard of the IDEO last June. He was fitted in Texas and returned when the device was ready. Constructed from lightweight carbon fiber, it's rigid enough to set and stabilize a foot in a way that eliminates pain, and it's flexible enough to provide some give while transferring energy with each step.

And it lets Revak, who lost 70 percent of his range of motion in the foot, run pain-free for the first time in nearly a decade.

From the Army to Alaska

Revak, now 35, received a medical discharge in 2007 and for the next two years lived in Minnesota with his wife, Marta, and their oldest daughter, Keilah.

In 2009 he came to Alaska to spend time with the family of Shane Woods, a fellow soldier who was killed in Ramadi in August 2006.

At a trail dedication for Woods, Revak was approached by the staff of U.S. Rep. Don Young, which was looking to fill a paid internship working with veterans.

Revak enlisted in the Army a few months after the 9-11 attacks and was injured on his second deployment to Iraq.

Through all of his travels, he kept Grandma's Marathon in the back of his mind. He remembered how the event jolted his sleepy hometown of Two Harbors, Minnesota, to life every summer.

In 2005, between deployments, he started training with the intention of running Grandma's. Though those plans were put on hold by his injury, the IDEO changed things. Revak had worked his way up to 5 miles when he announced his intention to run this year's marathon.

Revak doesn't want his debut marathon to be just about himself, so he is running in memory of Lisk and to raise money for USO Alaska. He has asked contributors to pledge $25.

The United Services Organizations made an impact on Revak while he was hospitalized in Germany. One of the first people to visit him was country music songwriter Thom Shepherd, who has written hits like "Redneck Yacht Club" and "Riding with Private Malone."

"That's another reason that I can't give up," Revak said. "I have to make it across the damn finish line."

He guesses he will finish the race in about five hours, but his time isn't important.

This article was originally published in the Duluth News Tribune in Minnesota. It is republished here with permission.