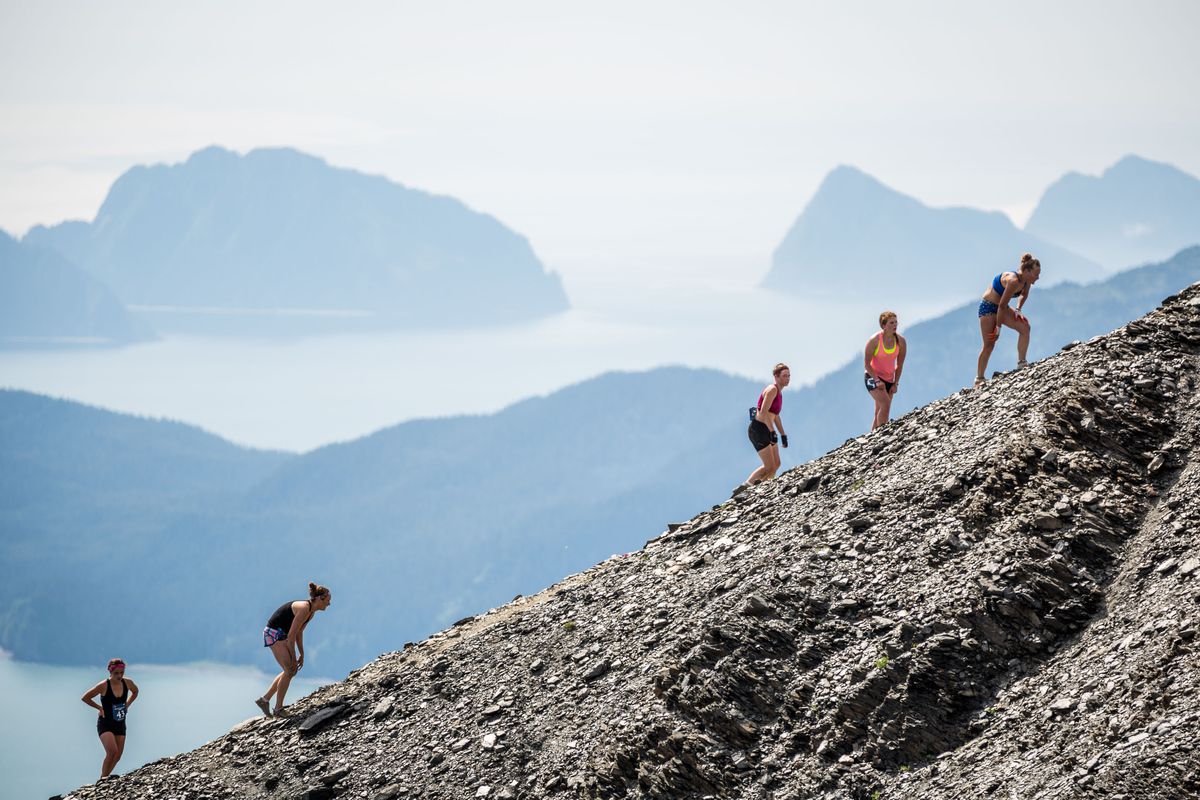 Backdropped by Resurrection Bay, women near the top of Mount Marathon during the 2014 race. (Loren Holmes / Alaska Dispatch News)

Backdropped by Resurrection Bay, women near the top of Mount Marathon during the 2014 race. (Loren Holmes / Alaska Dispatch News)

The big news at Mount Marathon this year — other than an all-out ban on dogs in downtown Seward — is a flip-flopped schedule that puts the men's race in the morning and the women's race in the afternoon.

The switch may be seen as a victory for gender equality, the theory being the afternoon timeslot draws a bigger crowd and is therefore the main event.

The change could bring benefits to both sexes.

The men no longer have to wait around all day before they race. And the women get a potentially faster downhill run if the men loosen the scree on the top half of the mountain.

"Having to wait around until 3 is painful," he said. "Your nerves are going all day long."

Anchorage's Najeeby Quinn, who posted top-five finishes in the 2015 and 2014 women's races, said the later start for women could be a challenge.

Nor does she know when to eat, provided she races at all — Quinn said she'll decide on race day whether an injured ankle will allow her to run.

Holly Brooks, a two-time champion from Anchorage, is skipping this year's race but anticipates the when-to-eat question could figure prominently for women.

"It's going to be hard," she said. "You're hungry, but you don't want to eat a lot. It's hours and hours for your stomach to turn into knots."

On the upside, women could enjoy a fast downhill if the scree is looser after being trampled by a couple of hundred men.

"I think the women are going to love it," Quinn said.

Whether the afternoon race is prime time is debatable — a huge crowd of spectators watches both races.

And it's impossible to know until race day if conditions favor one timeslot or the other. If it's a hot, clear day, the women may suffer because they'll be racing in the heat of the day. If it's overcast in the morning, the conditions may be more slippery for men.

[Robinson, Saari warm up for Mount Marathon with marathon adventure]

One thing's for sure, Gates said. The early start means the men will get to begin the post-race party some four hours earlier than usual.

"Alaskans know how to party, I'll be honest," he said. And so pacing will be important if the men want to party through the night, Gates said.

Downtown Seward will be a dog-free zone Monday.

The City of Seward established a no-pets policy for the Fourth of July.

No dogs, leashed or unleashed, will be allowed downtown or anywhere along the race course, including all trails on the mountain.

Officials said the ban was put in place to reduce problems with sanitation and clean-up and to increase safety for the runners.

Live coverage of the men's and women's races will be broadcast Monday on GCI channel 1 and KTVA-Channel 11.

No live coverage is planned for the 9 a.m. juniors race.

Doyle Woody contributed to this report.