The tale of a salmon can 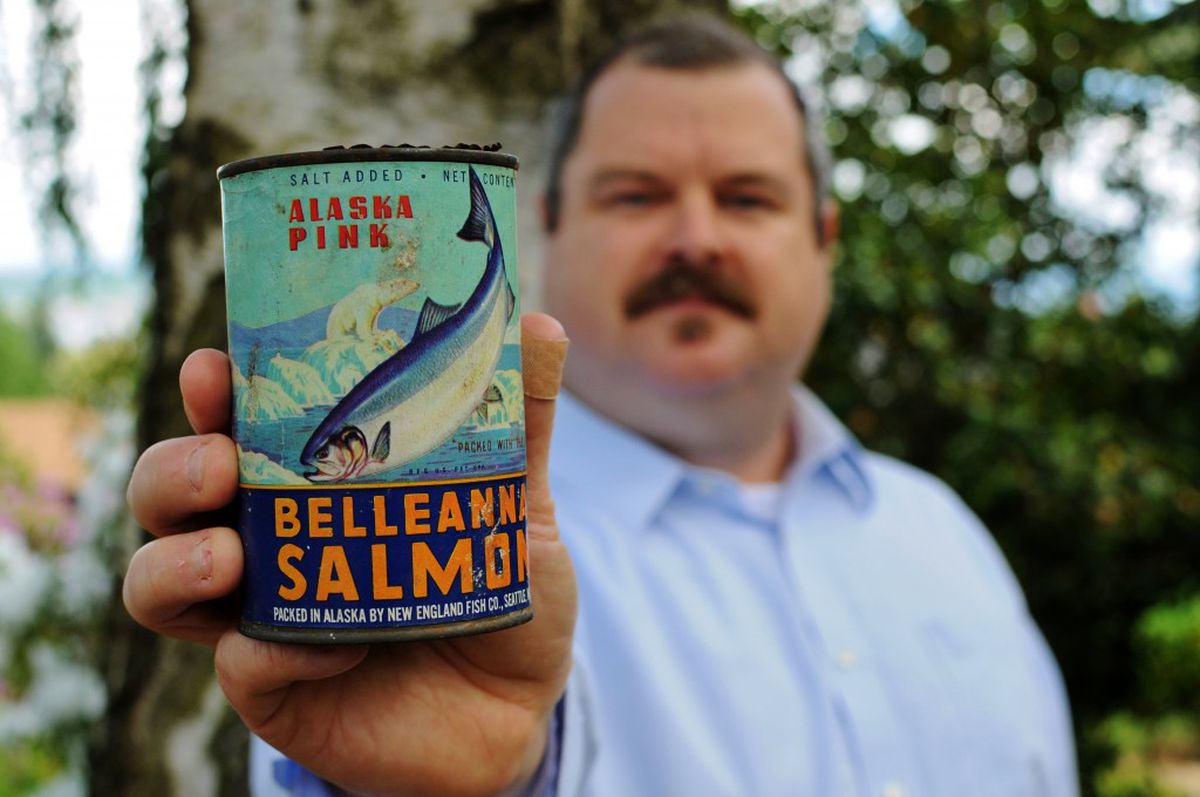 FAIRBANKS – The eBay seller from whom I bought the can guessed that it dated from about the 1940s. No other information.

The empty can of Belleanna pink salmon, a "1-lb. tall" in industry terminology, shows spots of rust on its exposed surfaces, including the lid that, if the jagged edge is any indication, had been chiseled and pried open by someone with a powerful hunger. The label shows a polar bear, more serene than ferocious, surveying the Arctic ice that is her home. And of course, there is a salmon, its upturned tail a symbol of the vitality and freshness of the meat inside the can.

The fact that the can exists at all is a minor miracle. Salmon labels are a dime a dozen — but an old can, its weathered label still affixed, that somehow stayed out of the trash for 70 years? Incredible. Chances are the can lived in the crawlspace of a house, maybe the attic. Or perhaps a carpenter ate the salmon for lunch and placed the empty can inside the wall he was then finishing, smiling at the thought of the artifact remaining unseen and untouched for years until a future homeowner decided to remodel the kitchen.

In any event, the Belleanna can survived and now sits on a shelf in my office. As a doctoral student at the University of Washington, I've been researching and writing about the history of Alaska salmon fisheries for several years now, and I take great pleasure in having the can hover over me while I work. Knowing almost nothing about its provenance only makes me enjoy it all the more. It seems right that a talisman's power should derive in part from the aura of mystery that surrounds it.

The historian in me, however, cannot resist a good research project. I'll never know who ate the salmon or how the can survived. But since the labels, logos and trademarks of canned salmon all changed regularly according to shifting consumer tastes, at the very least there's a way to test the eBay seller's estimate of the can's age. I set out to discover what I could of the history of the can, and along the way I learned a few things about the industry that produced it. The design on my can, for example, was not the first, nor the second, but the third iteration of the Belleanna label, with a long record of advertising strategies, corporate machinations and legal maneuvering behind it.

During canned salmon's heyday from about 1910 to 1955, Belleanna was one of the highest-selling brands for the New England Fish Company, or NEFCO, a Boston-based processor that established Pacific operations in Vancouver, British Columbia, in 1894. The company later opened offices in Seattle and Ketchikan with canneries up and down the coast. The hill above the Ketchikan cannery, where NEFCO built bunkhouses for its workers, came to be known as Belleanna Heights in honor of the famous brand.

NEFCO debuted the Belleanna label in 1911, and used it not for salmon exclusively but for a range of fresh, frozen and canned fish products. The first label showed a halibut and salmon entwined in a net, set against a garish yellow-and-green backdrop. NEFCO executive Harry R. Beard hated it. By the time he became chairman of the board of directors in the mid-1920s, he ordered the logo dropped. "It will never be used by us again," he informed the trademark lawyers and instructed his staff to design a new, modern logo for the Belleanna brand, which he planned to keep.

Red was by far the most common color on canned salmon labels in this era. It not only spoke to the deep, alluring color of the meat inside the can, but also proved effective at hiding spots of rust that sometimes appeared when unlabeled cans were shipped from Alaska or stored in warehouses for months at a time. Starting in the 1920s, NEFCO began redesigning all its labels to incorporate a red background for each. For Belleanna, the company worked with Armour Printing Works of Chicago on a label that featured a polar bear riding an ice floe (still not my polar bear, however).

No sooner did the new-and-improved Belleanna hit grocery store shelves than a rival company, Pacific American Fisheries of Bellingham, alleged trademark infringement on this and four other NEFCO brands. The label for PAF's Great Northern brand — trademarked in October 1928, just before NEFCO debuted the new Belleanna — likewise featured a polar bear on an ice floe, the aurora borealis shimmering in the sky above. (Interestingly, PAF packed not Alaska salmon in its Great Northern cans, as the brand name, polar bear and aurora, might suggest. Rather, the cans contained chinook salmon caught in Puget Sound!)

Through its sales agent, Deming & Gould, PAF threatened to sue for damages if NEFCO did not change its Belleanna label.

"These are some of his (PAF executive S. A. Deming's) best labels and he really feels quite strongly about the matter," wrote W.B. McCord, NEFCO's corporate counsel. "I believe that unless some adjustment is made he will undoubtedly bring suit for infringement."

NEFCO initially refused to budge. A search of brands sold by other companies revealed the polar-bear-and-aurora motif was actually quite common. Frank B. Peterson & Co. of San Francisco featured polar bears on both its Rising Light and White Bear brands. The Alaska Packers Association had one, too. Even the Theodore Poehler Mercantile Co. of Topeka, Kansas, sold its own specialty "Poehler" brand (clever pun) with a growling white bear on the label.

"It is the recommendation of this office that we resist any demand by Deming (& Gould) that we cease using the polar bear on ice vignette, which is so strikingly a part of our Belleanna brand," said NEFCO's lawyers.

Within a few years, however, NEFCO did indeed decide to change the Belleanna label yet again — and here is where the story of my can really begins. In early 1935, the company unveiled its new design. It dropped the red color scheme in favor of a bluish-white Arctic sea scene, complete with a polar bear standing regally atop an iceberg. The panoramic image reached all around the can, from one end of the label to the other. Wherever the can was positioned on the grocery store shelf, on whatever surface the consumer's gaze first fell, there would appear a vista of the pristine Arctic. It was not uncommon in this era (nor today, for that matter) for advertisers to deploy images of ice and snow to suggest freshness, and to allude to the ice-cold waters of the North Pacific so that consumers might believe in the purity and wholesomeness of the product.

In fact, NEFCO had been employing this imagery for many years. In 1922, even before the first red-themed iteration of the polar bear motif, the company shipped frozen halibut and salmon fillets by train across the continent to New England. "From their home in the cool, clear waters of Alaska to your own fishman," the ad copy reads, "their original, delightful flavor is perfectly sealed in with a jacket of ice."

NEFCO reiterated the message with a slogan it would use for decades: "Packed with the wiggle in its tail."

The new, blue, ice-cold label with the art deco lettering first appeared on a can of salmon on Sept. 9, 1935, when NEFCO shipped eight cans to H. E. Runyon Co. in Des Moines, Iowa, for the wholesale price of $1.57. The shipment was really just a formality meant to satisfy the U.S. Patent Office, whose regulations stated that interstate commerce had to occur before a trademark on any brand name or label design could be issued. NEFCO duly received its trademark papers on Oct. 29, 1935, and thousands of cans of Belleanna fancy pink salmon went out the doors to groceries all over the country. One such can was pried open, had its contents consumed, and was then squirreled away up in an attic, down a crawlspace, inside a wall or in some other hiding place where it remained secure, until finding its way to my office many decades later.

Turns out the eBay seller was probably correct. The can dates to "about" the 1940s. All I can say for sure is that it goes back no further than September 1935. When exactly NEFCO stopped using the polar bear label is not known, but the design probably lived for a decade or so. The salmon canning business experienced major upheavals in the 1940s due to World War II and declining fish runs throughout Alaska, and in the postwar years NEFCO revamped once again all its brands and logos. By 1950, NEFCO was using the Belleanna name not for canned salmon but for frozen fillets of several different species of fish. By then the polar bear had been dropped from the logo.

Today the overwhelming majority of salmon sales around the world involve frozen fish, though the canned product remains popular in England, South Korea and elsewhere. It remains available on grocery shelves in the 49th state, but is something of a niche market. The notion of eating salmon from a can is beyond the comprehension of many Alaskans, who know salmon mainly as fresh steaks and fillets.

Ross Coen is a professor at University of Washington specializing in the history of fisheries. Reach him at rcoen@uw.edu.

Sources for this article include: