In Kamchatka, Russia, many adventures begin the same way: in a chopper 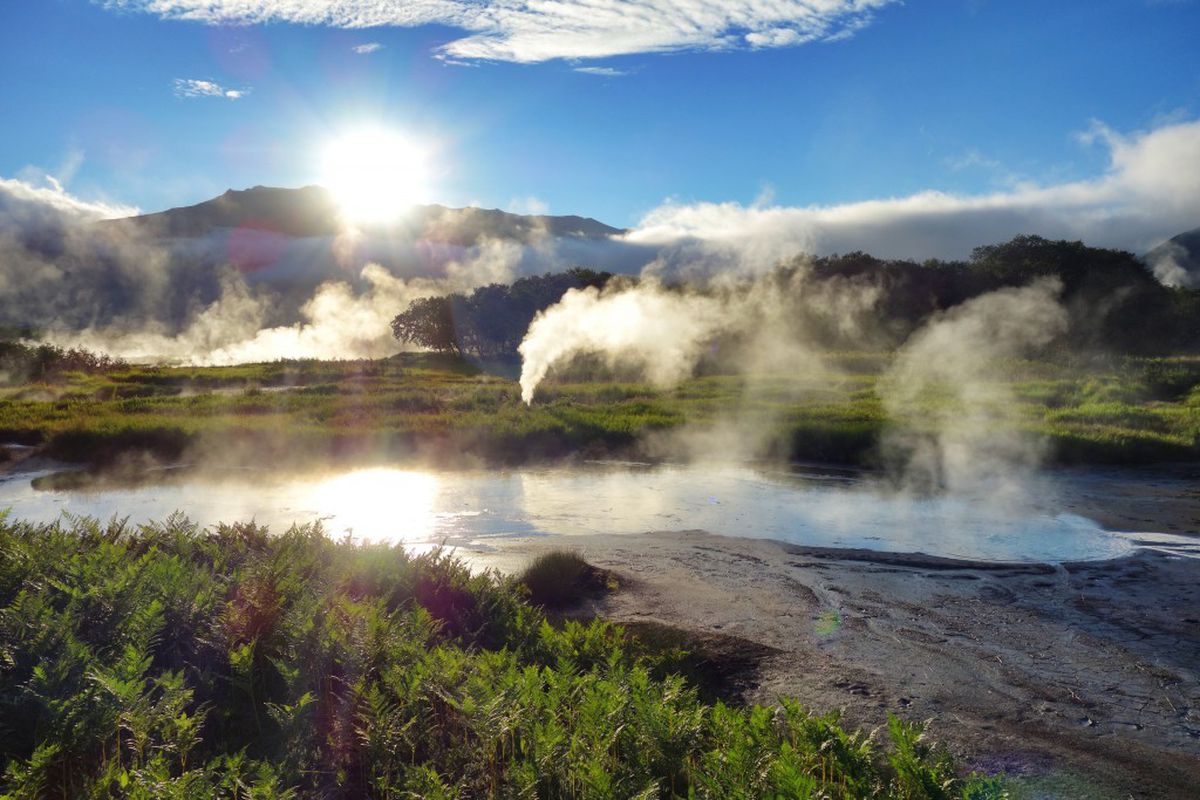 Steam vents in the Uzon Caldera

Steam vents in the Uzon Caldera

It's hard to overstate the importance of a helicopter when you're an adventure travel fan. Temsco Helicopters in Juneau has a fleet to take travelers up to the glaciers. You'll also see whirleybirds parked in Girdwood, up at Denali Park and in Skagway.

But I was surprised at the size of the Russian helicopters used in Kamchatka to transfer folks from the city to the middle of nowhere.

The chopper of choice in Russia is the giant, 24-passenger Mi-8. There are different configurations of this helicopter, which was first produced in the former Soviet Union in 1967. Since then, it is one of the world's most-produced helicopters. I saw several versions on the helipad while I waited in marginal weather for a trip to Kuril Lake near the southern tip of the Kamchatka Peninsula. Some had airline-style seating with oversized windows. Some had supplemental fuel tanks mounted above the windows for longer flights. Others had smaller, round windows with bench seats along the sides.

Since helicopter travel is weather-dependent, I didn't fly that day. In fact, for most of the week I was in Kamchatka, low clouds settled over the area, obscuring the giant volcanoes which encircle the city.

But one evening, the clouds parted and the helicopters started buzzing; some were headed north of the city Petropavlovsk-Kamchatsky to the Valley of the Geysers, named a World Heritage Site by the United Nations Organization for Education, Science and Culture. Other helicopters were taking off to the south to see the bears at Kuril Lake. Still more were loaded up with hikers, fishermen and hunters, many of whom had waited a day or two in town to start their adventures.

Helicopter day-trips usually involve about two hours of flying time, a couple of hours of hiking, a stop for lunch or dinner and another stop for a soak in one of the natural hot springs which dot the peninsula.

My original itinerary from Vityaz Travel to Kuril Lake included a flight south from Yelizovo (located between Petropavlovsk-Kamchatsky and the airport) to an electric wire-enclosed observatory on the shores of the lake to see the bears. After a couple of hours, there is a short flight into the caldera of a nearby volcano where dinner was served. After that, there was a 10-minute flight to the hot springs, and then a return to Vityaz's heliport. This six-hour tour cost about $554 per person, although the total may vary due to currency valuation.

At another heliport, with another handful of Mi-8s on the pad, Volcanoes Land Travel Company offers a one-day tour to the Valley of the Geysers, with several stops. This includes a route past a couple of smoldering volcanoes on the way to the valley. There's a 3.5-hour excursion inside the valley before taking a 10-minute flight to the Uzon Caldera in the Kronotsky Nature Preserve. After a 50-minute walk-around on the boardwalk at Uzon, there's another flight to where lunch is served. From there, it's a short flight back to the helicopter pad. The cost is about $635 per person.

Because many of the trips were delayed due to weather, I opted to hop aboard a drop-off flight with a group of Austrian hikers. They had scheduled a nine-day hike from the Uzon Caldera into the Valley of the Geysers. In addition to the group, there was an interpreter, a park ranger with a huge bear gun and a cook.

The flight up to the valley was spectacular — and we were able to open the large windows for better pictures. On arrival at the caldera, we hiked around a sulpheric acid lake, saw plenty of bear tracks and watched the boiling mud pots and steaming vents. The boardwalks were in excellent condition, and the park ranger was vigilant in keeping the group together. Although the caldera basked in sunlight, we could see the fog settling in over the Valley of the Geysers, so we didn't get to see it on this trip.

But even a 50-minute stop in the midst of this park was enough to remind me that it is the wild natural environment that draws people from all over the world to Kamchatka.

Back at Martha Madsen's guest house in Yelizovo, near Petropavlovsk-Kamchatsky, I visited with fishermen and photographers who were on their second or third trip to the region. The anglers were floating the Savan River for rainbow trout that average between 22 and 26 inches long. The group was organized by The Fly Shop in Redding, California, and the trip included accommodations, helicopter flights in Kamchatka, meals and gear to float on the river. Anglers were responsible for their own fishing gear, airfare and mandatory medical evacuation insurance. The cost for a weeklong package runs $6,850.

The photographers at the guest house were also waiting for the weather to clear before flying out by helicopter for an extended stay at Kuril Lake, or one of the other unique bear habitats on the southern part of the island. There were photographers from Germany, England, Italy and several other countries. Since the helicopters weren't flying, they elected to go by monster-truck. It was an arduous route to the west coast of the peninsula. From there, they traveled down the beach until they reached a river crossing, where they had to time their crossing with the tide. On the other side of the river was another truck, which took them the rest of the way. But these travelers were used to adventure, weather delays and last-minute itinerary changes. Many had traveled in Africa, Antarctica and remote locations like Papua New Guinea and Indonesia. In fact, several had visited Alaska to photograph bears.

Whether it's a Russian outfitter or a U.S.-based operator such as MIR Travel in Seattle, the best-laid plans depend on passable weather for safe helicopter transport. Once the clouds parted in Petropavlovsk-Kamchatsky, revealing the big mountains that surround the city, I had a different perspective of my place in nature.

The same is true when climbing aboard the huge Mi-8 for an hourlong flight to another world in the wilderness. Whether you're a hiker, angler or a wildlife photographer, Kamchatka offers many choices to explore spectacular countryside that is very difficult to reach without a chopper.