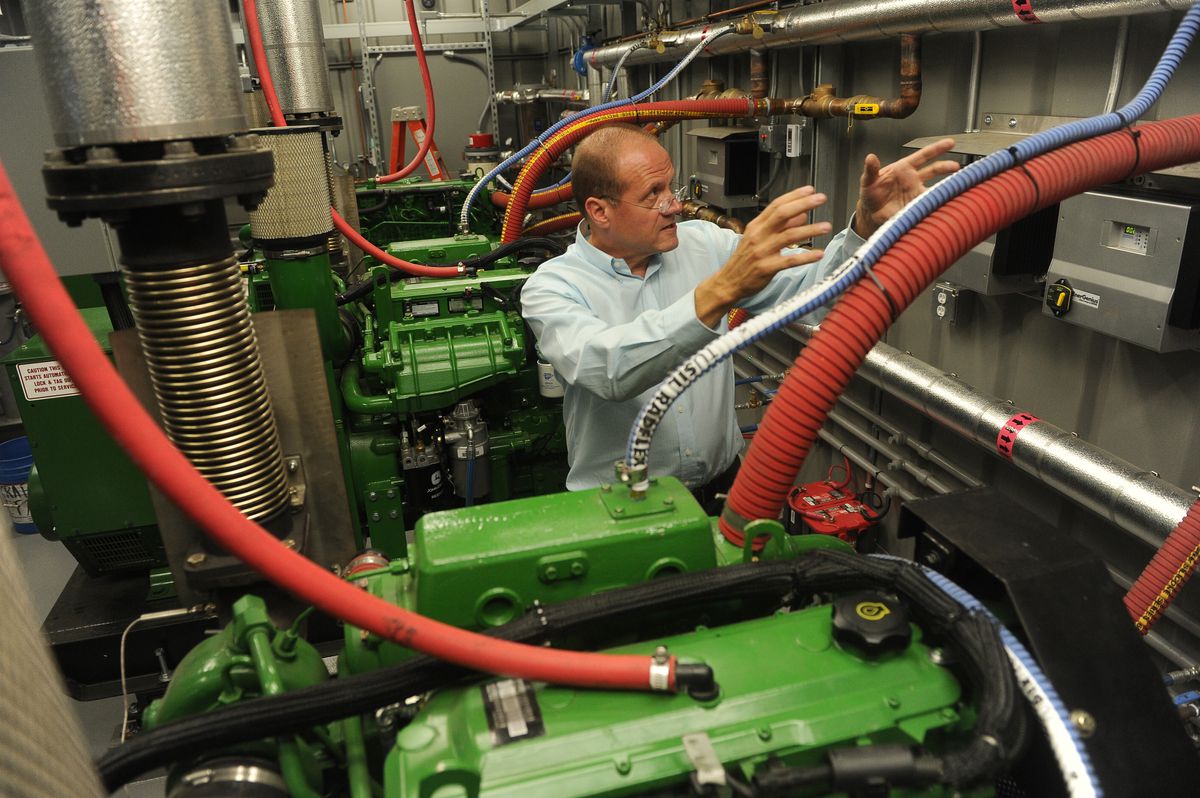 Project manager Allan Fetters shows the powerhouse module that is being built by the Alaska Energy Authority in Anchorage, AK on Thursday, August 11, 2016. The power module that is destined for Perryville, AK, will integrate the existing wind farm, which does not work well with the current generator. (Bob Hallinen / Alaska Dispatch News)

Project manager Allan Fetters shows the powerhouse module that is being built by the Alaska Energy Authority in Anchorage, AK on Thursday, August 11, 2016. The power module that is destined for Perryville, AK, will integrate the existing wind farm, which does not work well with the current generator. (Bob Hallinen / Alaska Dispatch News)

But there was a problem in Perryville.

The wind turbines saved money, reducing the need for costly diesel fuel at the local power plant. But the new and old systems didn't work well together. Bursts of wind off the Alaska Peninsula occasionally damaged the diesel generators, forcing operators to cut the village's power for an hour or so to replace parts.

"It doesn't take much for the wind to wreak havoc with it," said Gerald Kosbruk, president of the tribal government that paid for and installed the wind turbines and runs the utility.

The village isn't alone. While renewable energy projects across the state have reduced greenhouse gas emissions and utility bills, they may not synchronize with the old diesel-fueled power plants that still provide most of the energy in rural Alaska.

But starting this fall, Perryville, a village of 110 people on the Alaska Peninsula in the Lake and Peninsula Borough, hopes those hassles become a thing of the past.

The state-owned Alaska Energy Authority in September plans to ship a high-tech powerhouse to the community, a 60-ton device contained in a metal structure the size of a mobile home that will replace the old power system and perform a number of new tricks.

Excess wind that can't be used in the electric grid will fire an electric boiler to help heat the local school. Waste heat recovered from the new diesel generators will also contribute, allowing the school to save an estimated $11,000 a year.

Computers in the powerhouse offer remote monitoring on cellphones or laptops, and will manage energy received from the fickle wind, reducing maintenance, agency officials said.

And the diesel generators, more efficient than the old ones, will cut the utility's diesel-fuel use by about 25 percent, saving the utility about an estimated $35,000 a year.

Utility operators are looking forward to fewer headaches, Kosbruk said. The diesel generators are decades old and need frequent repairs — one clunked out this winter.

"Its parts were so old it couldn't take it anymore," he said.

The $3 million system — the federal government is footing 75 percent of the bill — was assembled at the authority's shop not far from the Port of Anchorage. Two operators from the village have attended training sessions in Anchorage to learn how to fix problems once the powerhouse arrives.

Anchorage officials can hold a videoconference with a local tech who might display suspicious machinery. They can also run a diagnostic program to help find problems in the system. The remote help can save thousands of dollars in travel and lodging costs, eliminating the need for Anchorage technicians to fly to a village.

"It's not our function to maintain and watch the powerhouse. But we build it for them and we offer support," said Fetters.

Fetters said the Perryville project isn't supposed to pay for itself. Instead, the idea is providing reliable electricity to the community — and meeting the authority's goal of reducing energy costs in Alaska.

"It's infrastructure, like the road in front of our house that doesn't pay for itself," he said.

The agency in recent years has helped fund dozens of new renewable energy projects in rural communities to help lower the cost of heat and electricity.

Piecing together state and federal funds, the agency has also shipped about 20 high-tech powerhouses to villages over the past decade. Though the powerhouses depend on diesel fuel, part of the goal is making renewable projects operate as efficiently as possible.

At the village of Larsen Bay on Kodiak Island, the agency installed a similar powerhouse in 2014 in tandem with updates to a hydroelectric system originally built in the 1980s.

As in Perryville, the upgrade allowed the village to draw more energy from renewable power, officials said.

The new system ties into the school, with hydroelectric power firing an electric boiler to provide heat.

"It's a win-win situation for both of us," said Bill Nelson, Larsen Bay's vice mayor and projects manager.

Plus, the community burns less fuel, helping reduce pollution. He said another advantage is that the system can be remotely operated by mobile phone.