The state of Alaska is paying each qualifying resident a $1,022 oil wealth dividend Thursday, with electronic transfers and paper checks.

This year's annual dividend, which comes from the $55 billion Alaska Permanent Fund, is half what it would have been under the traditional formula used by the Legislature to determine the size of the payments.

Alaska Gov. Bill Walker, citing a multibillion-dollar budget deficit, used his line-item veto power in June to halve the dividend — though his power to make that move is the subject of an active lawsuit by Anchorage Democratic Sen. Bill Wielechowski and two longtime Alaska politicians, Clem Tillion and Rick Halford. 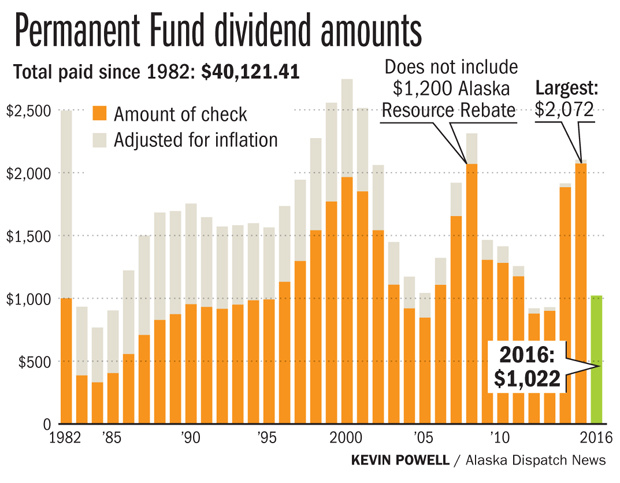 Even with the reduction, more than 640,000 Alaskans will receive the payments this year, costing the state more than $650 million. Paper checks will be mailed Thursday, while banks independently decide the exact time that direct-deposited dividends are released to customer's accounts, according to Sara Race, the director of the Permanent Fund dividend division in the state revenue department.

For residents who chose to direct part of their dividend to charity through the Pick.Click.Give program, donations will be paid in the order that they were selected, up to $1022.00, Race said.

Nathaniel Herz is a reporter for the Anchorage Daily News. He’s been a reporter in Alaska for nearly a decade, with stints at ADN and Alaska Public Media. He’s reported around the state and loves cross-country skiing.

In Alaska’s U.S. Senate race, Murkowski and Tshibaka look ahead to November