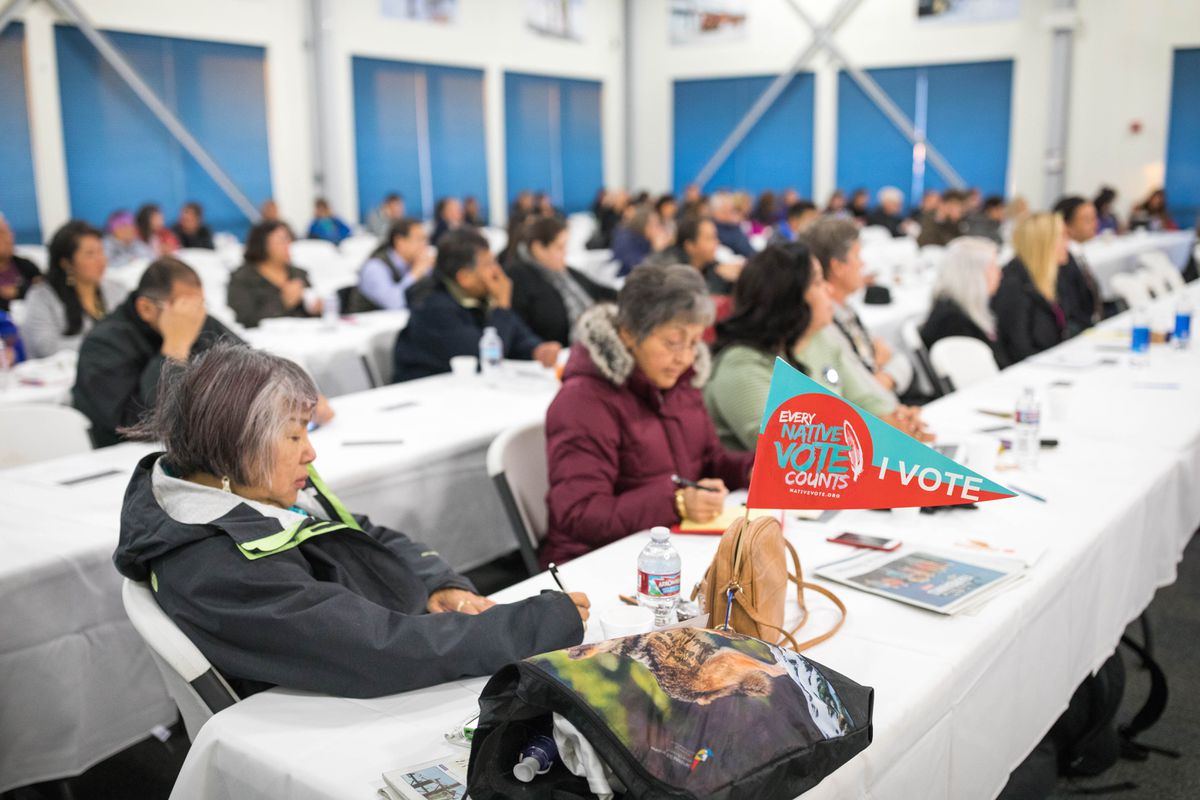 Attendees at an Alaska Federation of Natives/National Congress of American Indians conference at a Doyon facility in Fairbanks on Wednesday, where AFN president Julie Kitka announced that AFN will be endorsing Hillary Clinton for president. AFN has never before endorsed a candidate for President of the United States. (Loren Holmes / Alaska Dispatch News)

Attendees at an Alaska Federation of Natives/National Congress of American Indians conference at a Doyon facility in Fairbanks on Wednesday, where AFN president Julie Kitka announced that AFN will be endorsing Hillary Clinton for president. AFN has never before endorsed a candidate for President of the United States. (Loren Holmes / Alaska Dispatch News)

FAIRBANKS — Alaska's more than 200 tribes are entering a new era with opportunities to create permanent homelands and to increase powers in other ways.

That is the view some top experts in Native American law as well as government officials relayed this week at tribal meetings in advance of the annual Alaska Federation of Natives convention, which starts Thursday.

Alaska has 229 federally recognized tribes — more than any other state and almost half the number in the country — and for the first time, they can petition the federal government to take their lands into trust, insulating it from local or state taxes and ensuring that it will never be taken away.

That mechanism was assured in August when Gov. Bill Walker agreed to end the state's legal challenge of an effort by four tribes and one individual to put land into trust. The tribes went to court to eliminate an Alaska exception that had held for decades.

Some see the new opportunity as a step toward Indian Country, with tribes governing their lands with their own laws. But many tribal parcels are small — just an acre or so — so it isn't practical to use that land as the basis for governance, Native rights attorneys Lloyd Miller and Matt Newman said at a tribal leaders summit this week in Fairbanks.

Tribal leaders at the summit said they support changing federal law to give Alaska tribes more jurisdiction in their communities. That is a separate path from the new land-into-trust provision, Miller said. There seems to be support from key elected leaders for more tribal governing authority including U.S. Sen. Lisa Murkowski — who is up for reelection — Gov. Bill Walker and Lt. Gov. Byron Mallott, Miller said.

"I think it's a golden moment," Miller told tribal leaders in Fairbanks Monday.

Mallott, who is Tlingit, told a separate tribal conference of AFN and the National Congress of American Indians that the Walker administration is ready to work with tribes, not fight them.

"Since the governor and I took office we tried to take down every piece of litigation that stood between us and tribes and we are almost there," Mallott said Wednesday.

The lieutenant governor said he considers tribes to be sovereign governments and doesn't care who says something different.

"I say bull because when you are working with me it's on a government-to-government basis," Mallott said.

Allowing tribes to move forward with land cases is one step but others are needed as the state and tribes work toward a more mature and sophisticated relationship, Mallott told the AFN tribal conference.

He also warned that tribes need to move with care when seeking lands held by Native corporations.

"Whatever we have to do, we are going to do it together, and we will be successful again," Mallott said.

The AFN tribal conference – which includes leaders of Native corporations as well as tribes — responded with a standing ovation.

Putting tribal land into trust is a complicated, 16-step process, Lawrence Roberts, assistant secretary for Indian Affairs with the U.S. Department of Interior, told the joint AFN and the National Congress of American Indians on Wednesday. Newman, of the Native American Rights Fund, had earlier said there are even more steps than that.

In the Lower 48, many tribes want land put into federal trust to create a homeland, and there are indications that in Alaska many will want that too, he said.

During the eight years of the Obama administration, some 540,000 acres have been restored to trust status, protecting it, Roberts said. But that doesn't make up for 90 million acres lost when reservations were divided into individual allotments, he said.

The new trust lands came about through about 2,200 applications for a variety of purposes including housing, agriculture, economic development and tribal infrastructure. Just 21 applications were for gaming, which can only happen in states with laws that allow it, Roberts said.

AFN is devoting a session Thursday afternoon on land into trust with a panel that includes representatives of tribes, Native corporations, the federal government and the state.

"It's probably the next big issue for the next 20 years," AFN president Julie Kitka said Wednesday afternoon.

So far in Alaska, the tribe in Craig is farthest along in its effort to put land into trust. It is seeking to protect the acre or so holding its tribal office.