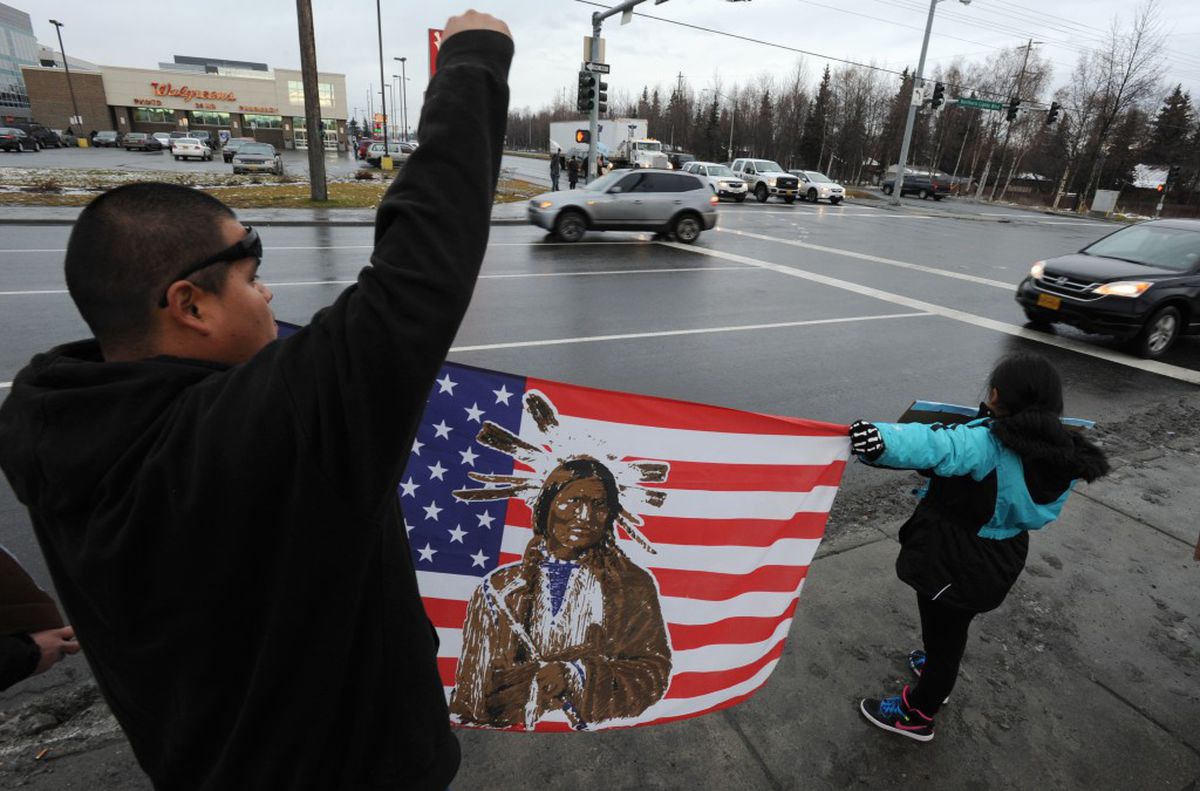 Myhi VanFleet and his daughter Shannowa VanFleet joined other Alaskans as they showed their support for the Standing Rock Sioux Tribe and their battle against the Dakota Access Pipeline on Sunday at the corner of Northern Lights Boulevard and Seward Highway in Anchorage. (Bill Roth / Alaska Dispatch News)

Myhi VanFleet and his daughter Shannowa VanFleet joined other Alaskans as they showed their support for the Standing Rock Sioux Tribe and their battle against the Dakota Access Pipeline on Sunday at the corner of Northern Lights Boulevard and Seward Highway in Anchorage. (Bill Roth / Alaska Dispatch News)

More than 60 Alaska activists gathered on a busy Anchorage street corner Sunday to show solidarity with the Standing Rock Sioux tribe of North Dakota, whose ongoing fight against construction of the Dakota Access oil pipeline has drawn international attention.

Organizers said local involvement in the demonstration is growing, with new delegations from Alaska set to travel to North Dakota in coming weeks.

Julien Jacobs, the organizer of Sunday's gathering, filmed the scene. He had recently returned from North Dakota, where he was on the front lines of a tense standoff between law enforcement and demonstrators seeking to stop construction of the pipeline. Jacobs, who is from Bethel, said he was motivated by concern over "resource extraction with no bearing in mind of a sustainable future."

"We have to protect water," he said, echoing the core sentiment of the North Dakota protest. "On indigenous land we've extracted so many resources."

Jorie Paoli of Anchorage said she's seeing the movement against the Dakota Access pipeline gather prominence in the minds of Alaskans.

"I think that indigenous people recognize what's happening in Standing Rock can happen anywhere in the country," Paoli said. "We recognize that the process that had been used to bypass indigenous viewpoints and concerns is one that has always been used, since the very beginning of this country."

Lisa Wade, a Chickaloon tribal council member, said she was preparing to travel to North Dakota with what she described as "a delegation of indigenous women from all over Alaska." The group has created a public Facebook page where they plan to share photos, videos and stories from the trip, Wade said.

Wade said she saw parallels in the Dakota Access pipeline struggle to issues in her own community.

"We've been fighting coal mining for a long time," she said. "What it comes down to is values — we want the long-term protection of place."

Jacobs said he had hoped more people would turn out to Sunday's event. But he said awareness of the pipeline issue seemed to be growing, along with the protest.

"It's not getting smaller," Jacobs said. "It is getting bigger."