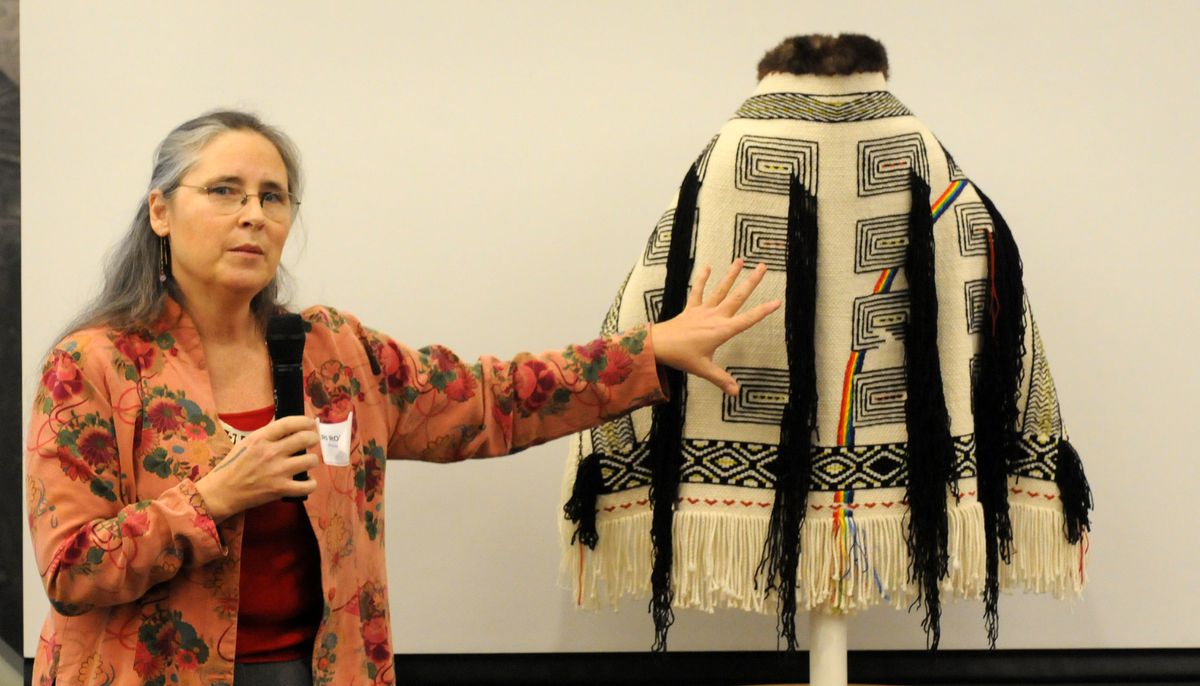 The Rasmuson Foundation, which in 2013 gave Rofkar its Distinguished Artist award, announced her death in a posting on Facebook.

No cause of death was given, though Rofkar wrote on her own social media page in October that cancer was consuming "much of my time and most of my energy."

During her 30-year career as a professional artist, Rofkar won awards that elevated her artwork to national and international acclaim, including the National Endowment for the Arts' National Heritage Fellowship in 2009. Recipients of the fellowship are sometimes referred to as "living cultural treasures."

She also taught and demonstrated her work to audiences ranging from elementary school students in Anchorage to a group learning about spruce root gathering in Yakutat to the Smithsonian Museum in Washington D.C.

Rofkar's Tlingit name was Chas' koowu Tla'a. She was of the Raven Clan, from the Snail House.

Born in San Rafael, California, and raised in Anchorage with summers in the Southeast community of Pelican, Rofkar credited her Tlingit grandmother Eliza Monk for introducing her to the weaving that would become her life's work.

"The enthusiasm and love of doing it I definitely got from her," she told the Anchorage Daily News in a 2009 interview.

As an adult, Rofkar lived in Sitka, where she raised three children.

Rofkar was known for her spruce-root baskets and Ravenstail robes, a style unique to Southeast Alaska that nearly died out before Tlingit and Haida weavers revived it in recent decades.

Rofkar was tutored in the form by weavers including Delores Churchill (Haida), Ernestine Hanlon-Abel (Tlingit) and Cheryl Samuel, according to the Smithsonian's National Museum of the American Indian.

Each Ravenstail robe took between 800-1,400 hours to weave, she said in an interview with the National Endowment for the Arts.

In a 2015 interview with Juneau's Capital City Weekly, Rofkar described some of her later projects: The first all-mountain goat wool Ravenstail robe made in more than 200 years, complete with double helix designs referencing the unique genetic fingerprint of Baranof Island's mountain goats. She also wanted to make a robe that would light up like an aurora when the wearer danced, with the use of modern materials like LED lights.

In a 2013 Rasmuson Foundation video, Rofkar talked about how the natural materials she worked with kept her humble — the funk of mountain goat hide, the hundreds of hours she would spend in the woods gathering materials.

The video shows her walking through the forests of Sitka, happily gathering cedar bark for dark-brown dye used in her robes.

"Ah, Gunalchéesh," she says to the tree, using the Tlingit word for thank you.

"I get to carry the culture for a little while, and then I'll hand it off."