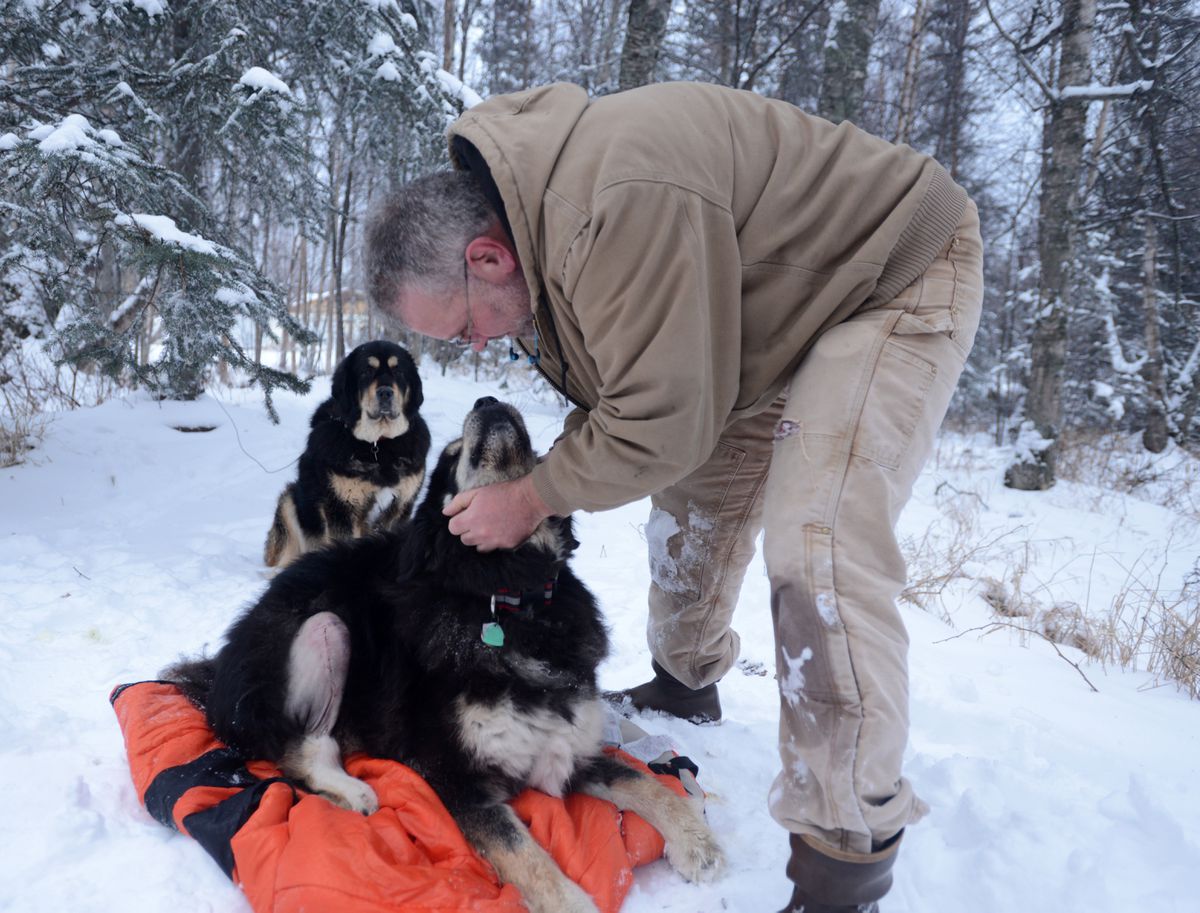 Chris Frost poses with his two Tibetan mastiffs in the fenced enclosure next to his Lazy Mountain area home outside Palmer on Friday. Frost says Williwaw, on the blanket, contacted mange from a feral rabbit that entered the enclosure, and tore the menisci and the anterior cruciate ligament in one of his hind legs in the encounter with the rabbit. In the background is Chena. (Bob Hallinen / Alaska Dispatch News)

Chris Frost poses with his two Tibetan mastiffs in the fenced enclosure next to his Lazy Mountain area home outside Palmer on Friday. Frost says Williwaw, on the blanket, contacted mange from a feral rabbit that entered the enclosure, and tore the menisci and the anterior cruciate ligament in one of his hind legs in the encounter with the rabbit. In the background is Chena. (Bob Hallinen / Alaska Dispatch News)

Frost says about a month ago, the 9-year-old dog killed the rabbit when it got into the dog's fenced enclosure on his Lazy Mountain property outside Palmer. He said a neighbor had let his bunnies loose to roam last spring.

This week, Williwaw the dog suffered a stroke during surgery at a Palmer veterinary clinic to repair a leg apparently injured during the chase. He stopped breathing but was resuscitated.

Frost is angry his dog had to suffer from a neighbor's decision to raise "free range" rabbits. He's out $2,500, money budgeted for a now-canceled trip to Costa Rica.

And he's on a mission to educate the public about the dangers of letting pet rabbits run wild.

"It's one thing if you keep it on your property," Frost said Thursday, just before he picked up Williwaw. "This just got a lot worse than the worst-case scenario I could imagine."

Alaskans are no strangers to the problems associated with feral rabbits. State wildlife officials say they field complaints from around the state, especially in Southeast, the Kenai Peninsula and Mat-Su. One East Anchorage neighborhood suffered major conflict over a particularly bad bunny problem.

Gerlach said a feral rabbit may have introduced a rare herpes virus into a rabbitry in the Valley nearly a decade ago. The farm lost a number of animals to the outbreak, he said.

Leslie Seddon, a former rabbit breeder in Wasilla, said she never let her animals roam outside an enclosed area and opposes the practice.

People make the mistake of thinking it's cute to let bunnies hop around the subdivision but, Seddon said, "it's cruel to let them out."

"They don't fare well with the predators we have," she said. "Even if they say we don't have wolves or coyotes, you have domestic dogs, you have all the aerial predators that are more than happy to pick up your pets. And rabbits are tasty."

It's illegal to release any non-native species into the wild in Alaska, according to Robert Doran, owner of a Wasilla company called Nuisance Wildlife Management. Doran said his company has dealt with feral rabbits on a number of occasions.

He's dealt with them personally, too.

One January, his home security light switched on and he looked outside his Fairview Loop area home to see a solitary bunny. A month or two later, he spotted another one. By summer's end, three dozen rabbits populated the neighborhood, decimating gardens.

"To me, it's mind-boggling to think how somebody could just let these things go without considering their neighbors," Doran said.

The problem of feral rabbits is real — but collecting them doesn't exactly fall under the purview of the Alaska Department of Fish and Game, said Lem Butler, assistant director of the agency's wildlife conservation division.

Butler said the best path for rabbit-addled residents is to bring in a private pest control expert to take care of the problem.

That's what his former neighborhood near Palmer did a few years back.

"They eat flowers, they eat vegetables out of gardens," Butler said. "It's not all that uncommon. Once they get out, they breed like rabbits, so they proliferate and they really become a nuisance for the local community. Of course, they draw other predators as well into the area: Hawks, owls, dogs chase them."

A scream in the night

Frost says his rabbit encounter started about a month ago.

He heard what sounded like a rabbit screaming outside around 1 a.m. He figured it was a coyote or fox killing one of the rabbits he'd seen hopping around the subdivision along East Clark Road on the shoulder of Lazy Mountain, a scattering of nice homes far above the Matanuska River.

Williwaw came down with mange within a week, he said, blaming contact with parasites from the rabbit. He can't prove the link: A vet treated the dog for mange and it improved but he didn't get the big tan rabbit tested.

The dog also tore both menisci and the anterior cruciate ligament in one of his back legs. Frost blames that on the chase that preceded the rabbit's demise.

Despite the stroke during surgery, Williwaw seemed fine, albeit subdued, on Friday a few days later. The dog faces months of recovery, Frost said.

Frost blames the neighbor with the rabbits and says other neighbors also feed the bunnies. He said he contacted the rabbit owners and said they told him they don't plan to change their "free-range" rabbit raising.

Frost said he medicated Williwaw and his two other dogs against mange. But that won't help any foxes or coyotes the rabbits might infect.

He plans to build what he's calling the "Wall of Death" around his place: a chicken wire fence with openings every 20 feet and snares set for any rabbits that decide to enter.

He's sure there will be more in the spring.