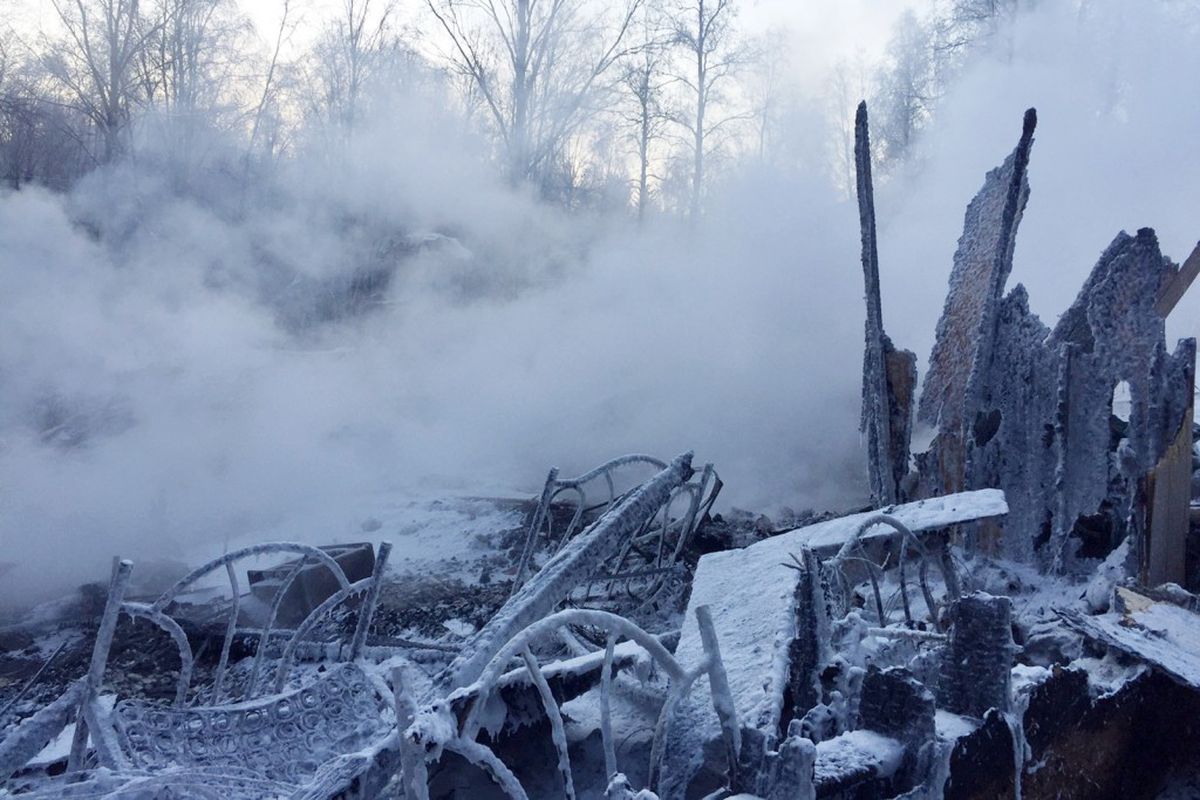 The home of Bill Peterson smoldered Thursday morning following a fire that destroyed the building Wednesday evening in Bird Creek. No one was injured in the blaze. (Robyn Peterson)

The home of Bill Peterson smoldered Thursday morning following a fire that destroyed the building Wednesday evening in Bird Creek. No one was injured in the blaze. (Robyn Peterson)

A fire Wednesday evening destroyed a single-family home in the Seward Highway community of Bird Creek.

No one was injured in the fire at the one-story home behind the Birdhouse Garage, which was first called in at 5:37 p.m., said Anchorage Fire Department Battalion Chief James Dennis. Girdwood Volunteer Fire and Rescue first arrived at 5:54 p.m., and the fire had already burned through the roof, Dennis said.

The house sat on the same property as the auto-repair shop owned by Bill Peterson, the ex-husband of Gina Peterson, according to public records. Gina Peterson, 40, was the girlfriend of 26-year-old Esteban Santiago, the man accused of killing five people and injuring more last week at the Fort Lauderdale, Florida, airport.

On Thursday afternoon, smoke still lingered over the lot. Robyn Peterson, the 17-year-old daughter of Bill and Gina, was at the Birdhouse Garage with photographs of the Wednesday family disaster, their home reduced to melted bed frames and pieces of charred wood covered in frost.

Robyn Peterson said she lived in the one-story, four-bedroom home with her three younger sisters, her father and his girlfriend. She said they were celebrating her father's birthday Wednesday at Chuck E. Cheese in Anchorage when they heard that their home was on fire.

"We got the phone call and we came back and we watched our house burn to the ground," she said.

Peterson said the family stayed at cabins on the same property Wednesday night, not in a motel in Bird Creek as previously reported.

The cause of the fire remained unknown Thursday, said Erich Scheunemann, assistant chief with the Anchorage Fire Department. He said that by the time firefighters arrived in Bird Creek, south of Anchorage on the Seward Highway, there was heavy smoke over the property and fire tore through the home's windows.

Scheunemann said the fire had no obvious cause, and there was nothing indicating it was suspicious.

Robyn Peterson said Thursday that her family also had no idea about what led the fire.

Peterson has been a family spokeswoman over Santiago's arrest in Florida. On Monday, she appeared on television and read a brief statement of condolences to the victims and their families in Fort Lauderdale, and said she hoped they would all find justice.

Now she has created an online fundraising page for her own family in the aftermath of the fire.

"In the midst of a family tragedy on blast with the media, not even a week later our home burns to the ground with everything we know. This is Robyn, the oldest daughter of 5 kids, Speaking out again for love and help, prayers. God Bless."

The house was outside any fire service area and its distance from a fire station made for a slower response, Dennis, the fire battalion chief, said. The water supply was limited to what fire vehicles could hold, he said.