In Alaska, veterans have a safety net. Why didn't it catch Esteban Santiago? 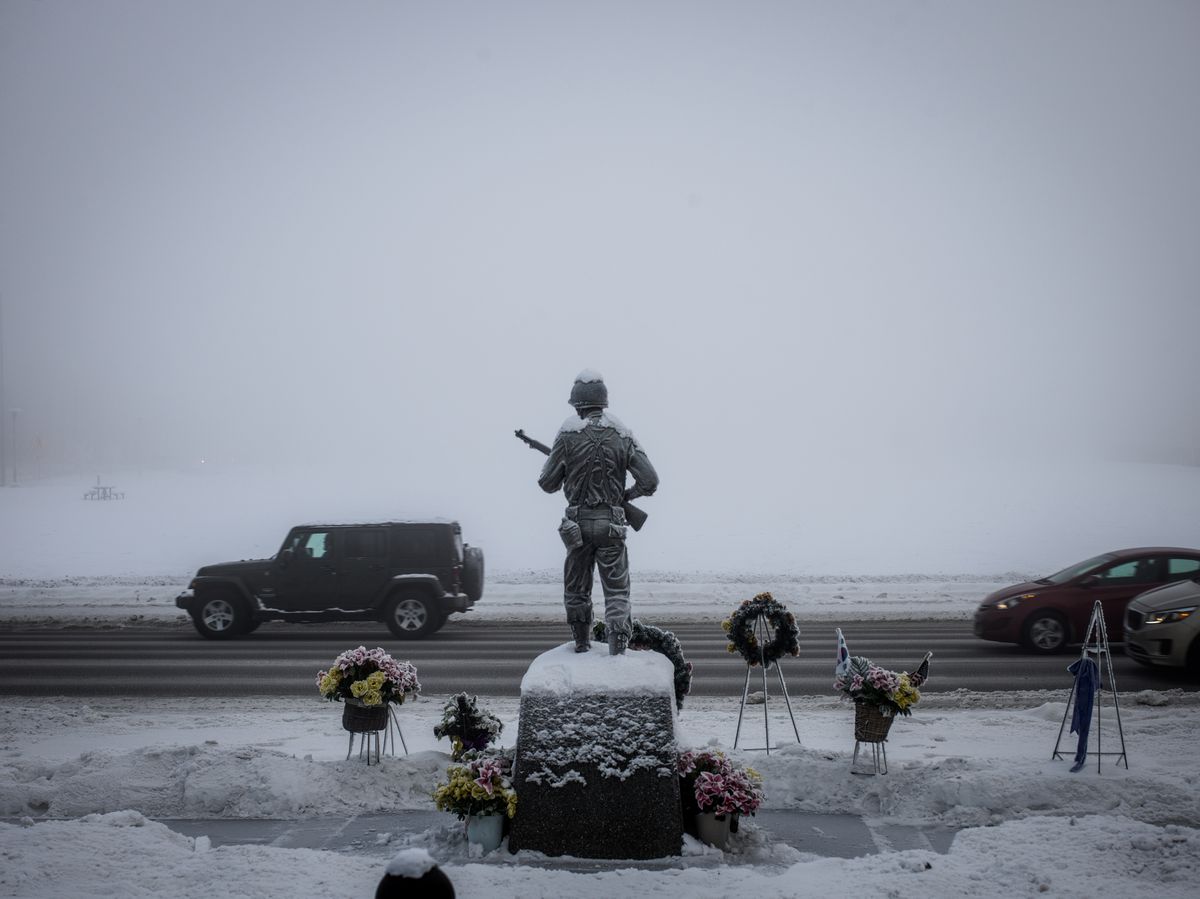 Monday night was lasagna night inside the strip-mall storefront of VFW Post 9981. Clemson was still behind Alabama on the big screens as regulars trickled in. At the bar, Joe Federmann considered how Esteban Santiago fell through the social safety net Alaska has for veterans.

A young combat vet, Santiago lived for several years in Anchorage before he boarded the plane that took him to Fort Lauderdale, Florida, where the FBI says he shot five strangers at the baggage claim. Santiago showed signs of serious mental illness and a propensity for violence the year before the trip, investigators say. Federmann wondered whether he had signed up to get mental health care from the Department of Veterans Affairs. There is good help available for vets, he said, but they have to take it.

"The thing about it is, a lot of veterans don't feel they want to seek that help because they think they don't need it," Federmann said.

It has been more than 40 years since Federmann, 71, saw a man killed by a rocket in Vietnam, but the memory is still searing, he said. When he came back from the war, he and his family moved to Alaska. He found peace in the vast wild landscapes, the fishing and a community of veterans who understood him, he said. He also had good care at VA. When he dies, he would like his ashes spread over an Alaska mountain range, he said.

There are more vets per capita in Alaska than any other state. One out of every three people is either military or a dependent, according to Verdie Bowen, state director of veterans affairs.

"A lot of the veterans come up here; they want to be on their own," he said. "A lot of veterans are of an independent mindset."

That mindset meshes well with Alaska's long legal tradition of respecting individual rights. The state constitution has an uncommon explicit privacy clause, stating "the right of the people to privacy is recognized and shall not be infringed." A person can carry a gun — open or concealed — without a permit. The standard for committing someone to a mental health facility is high. But this culture of fierce independence may also be part of what kept Santiago from getting the help he needed, said Vanessa Meade, a social work professor at the University of Alaska Anchorage, an advocate and Gulf War Army combat veteran.

[As his life unraveled, Esteban Santiago slipped through all the cracks]

"Individual rights here are really held high, which can be a really good thing," she said. "But if somebody does need assistance, it can make it hard for people to get access to it."

When Meade read Santiago's story, a flood of similar recent stories came to mind. There was veteran Micah Johnson, who killed five police officers in Dallas last year, and Gavin Long, who shot officers in Baton Rouge. Most veterans are doing just fine, but for those who are suffering, the system can do better, she said.

"DOD and the VA don't communicate," she said. "If a veteran doesn't sign up for services before they leave the military, it is really, really difficult for them to get in."

Roughly half of Alaska's 70,000 veterans are enrolled with VA, Bowen said.

It's unclear whether Santiago had enrolled with VA in November when he showed up at the FBI headquarters with his infant child and a gun, complaining his mind was being controlled by a U.S. intelligence agency. He was hospitalized for four days at a psychiatric facility and released. Police took his gun, but having no legal reason to keep it, gave it back a month later. When he arrived four hours early for his one-way flight to Florida on Jan. 6, checking only a firearm, he attracted no attention. Gun cases are a common sight at the airport.

[Esteban Santiago checked in more than 4 hours early for his flight, carrying only a gun case]

Alaska has no laws that restrict gun ownership. It relies instead on federal law. To lose his gun under that, Santiago would have had to be involuntarily committed on a 30-day petition, said Mark Regan, legal director at Alaska's Disability Law Center.

In Alaska, a person must be proven to be an immediate danger to himself or someone else, or disabled in a way that he is unable to meet his own most basic needs. Alaska's civilian mental health system is not set up to institutionalize patients, and some clinicians say it is overburdened. People in crisis are evaluated, stabilized and sent home with referrals. But sometimes they don't follow through. Even if they are delusional, they are allowed to make that choice. This may be what happened with Santiago.

"That's what happens with a lot of people. They go into API (Alaska Psychiatric Institute) and they come out stabilized," Regan said. "The way it works has less to do with how the statutes work and more to do with pressures on the system."

That is how some seriously mentally ill people end up on the street. Roughly a third of Anchorage's homeless population is mentally ill. The largest mental health care provider in the state is the prison system.

Jeffrey Venes, a former air crewman in the Marines, walked through the Anchorage airport just a day before Santiago on his way to attend community college in Oregon. Venes, 31, who is Yup'ik and Athabascan, is from Bethel. Two of his brothers are in the military. His dad was in the Navy in Vietnam and his grandfather was in the Territorial Guard during World War II.

"A lot of people do join the service from rural Alaska. It's a very prideful thing to do. Go out and see the world — that's one of the biggest things for me," he said.

Santiago's story stayed with Venes. They were in the same stage in life. He'd even considered joining the Alaska Army National Guard, where Santiago served until he received a general discharge in August after what military officials said was unsatisfactory performance.

The difference was that Venes's family and his village give him a support system, he said.

Bruce Lund, senior vice commander of the VFW Post, sat down the bar from Federmann. He'd recently retired from the Air Force after 26 years that included deployments during the Gulf War and recent Middle East conflicts. He crewed cargo airplanes that hauled troops, supplies, prisoners and sometimes the bodies of soldiers coming home.

"A lot of people don't understand the military, you know?" he said.

He wished that Esteban Santiago had found community in Anchorage that could have helped him. He hated the way that Santiago's crime reinforced stereotypes about veterans and mental illness. For Lund, the military was a good experience, and VFW is a second family, he said. Coffee at the bar is free to any vet who comes in the door.

"Military people are neat people to hang out with," he said. "Plus we all have something in common. We've given up a lot."