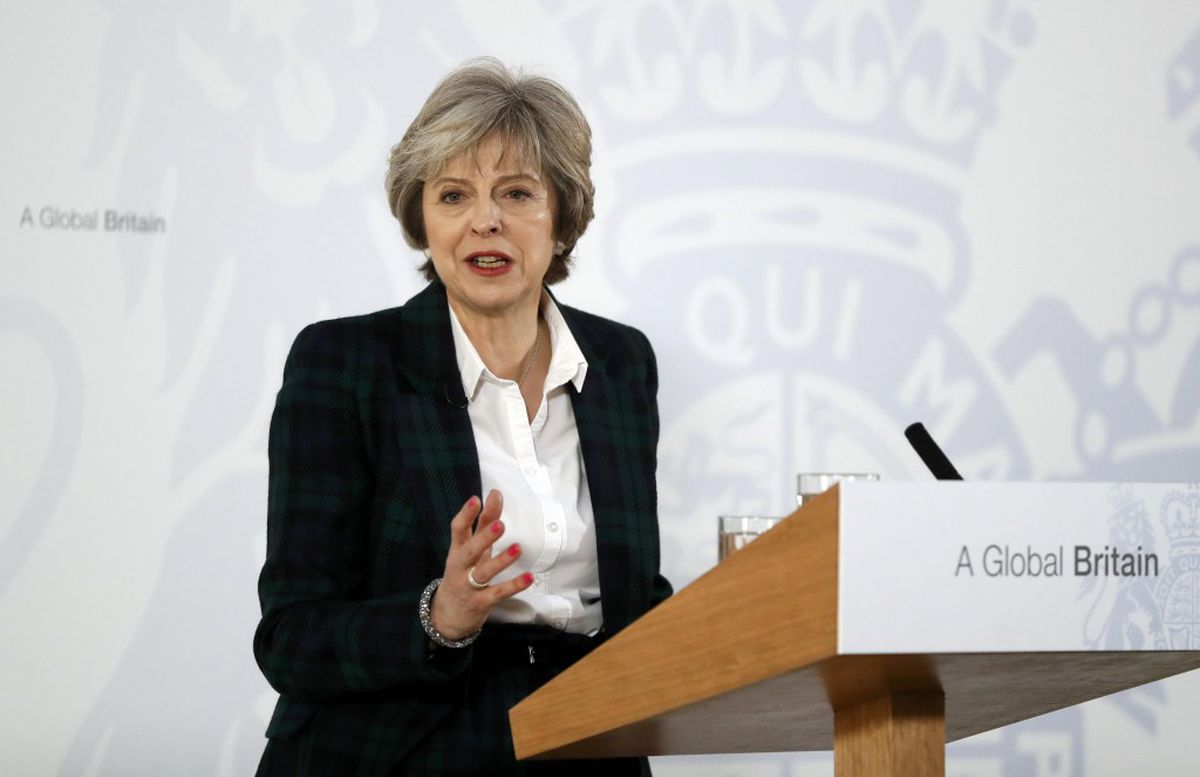 LONDON – British Prime Minister Theresa May called Tuesday for a clean break from the European Union, indicating that her country plans to leave behind the most essential elements of the bloc.

After refusing for months to give "a running commentary" on Britain's negotiating strategy, May's speech was the clearest indication to date of the country's departure plans that were set in motion by last June's referendum on Britain's EU ties.

May said that Britain wants to be "the best friend and neighbors to our European partners" but cannot be "half-in, half-out" of the European integration project.

"We do not seek to hold on to bits of membership as we leave," she said. She went on to reject preexisting models for quasi-membership that have been favored by those seeking "a soft Brexit."

The remarks instead point to a jarring departure. Britain will jettison both the single market – which guarantees the free flow of goods, services and people across national boundaries – as well as the customs union, which dictates the terms of trade between Europe and the outside world.

Such a break has been widely anticipated, though never formally spelled out. Currency markets were relatively stable on Tuesday following drops in the pound over the previous several days as excerpts of May's speech began to circulate.

Britain voted 52-to-48 in June to leave behind the European Union after over four decades membership of the bloc and its precursors. Britain's anti-establishment message was seen as prelude to other populist backlash around the world, led by the election of Donald Trump.

May was a reluctant backer of "remain," but in the months since the vote she has done little to disappoint ardent Brexiteers. She has stressed that British voters want tighter control over immigration, and her words suggest that will be her priority in the breakup talks – even at the expense of economic pain from losing membership in the single market and customs union in the so-to-be 27-nation bloc.

In the hours before she spoke, Brexit advocates were approving while critics despaired.

Paul Nuttall, leader of the anti-EU U.K. Independence Party, told the BBC that Britain would be able to negotiate favorable trade terms with the EU from outside the bloc because ""they need us more than we need them."

But Tim Farron, leader of the pro-EU Liberal Democrats, said May was careening toward "a destructive, hard Brexit and the consequences will be felt by millions of people through higher prices, greater instability and rising fuel costs."

May's speech comes a day after the publication of an interview in Britain's Times of London and Germany's Bild in which U.S. president-elect Trump expresses enthusiasm for a free trade deal between the U.S. and the U.K. Such a deal would only be possible if Britain leaves the customs union.

The comments were welcomed by British Foreign Secretary Boris Johnson and by Downing Street, though aides to the prime minister have cautioned that negotiations would be lengthy.

May, who has been in office since July, has repeatedly promised to trigger the start of Britain's exit talks by the end of March. Once that's done – through a mechanism known as Article 50 of the EU's Lisbon Treaty – Britain will have two years to negotiate the terms of its exit with the 27 EU members that remain, spanning from Ireland to Cyprus.

Europe has signaled it will take a hard line with Britain. At a time when other EU countries are flirting with a departure, allowing Britain to keep the benefits of membership while unshackling itself from the burdens could prompt other nations to speed toward the exits.

"Should it become apparent that you can get full access to the single market even if you can choose certain things then we risk that every country cherry-picks," said German Chancellor Angela Merkel in a Monday night speech to business leaders.

May's words were being closely watched in European capitals. Germany's Die Welt newspaper told readers that the prime minister's speech "risks a showdown with the EU."

Paris's Le Figaro said May was putting "politics before economics."

May delivered her speech at a gilded, neoclassical, 19th century mansion – Lancaster House – in front of an audience that included foreign diplomats. Margaret Thatcher had used the venue 29 years ago to endorse Britain's single market membership.

May spoke in front of a white backdrop emblazoned with the words "A Global Britain," and her speech emphasized the importance of the country's ties both with Europe and beyond.

"We are leaving the European Union, but we are not leaving Europe," she said.

In an analysis published before May's speech, the Eurasia Group's Mujtaba Rahman said May's words would represent an "attempt to mend fences with the EU, given the growing realization in Number 10 that Brexit needs to be less adversarial."

But he also predicted Europe would stick to a tough line on both the single market and the customs union, regarding both "as binary choices."

"Despite wishful thinking in the U.K.," Rahman wrote, "it's unlikely there will be more flexibility over these parameters once French and German elections are over this year."