Could North Korea actually hit Alaska with a missile? 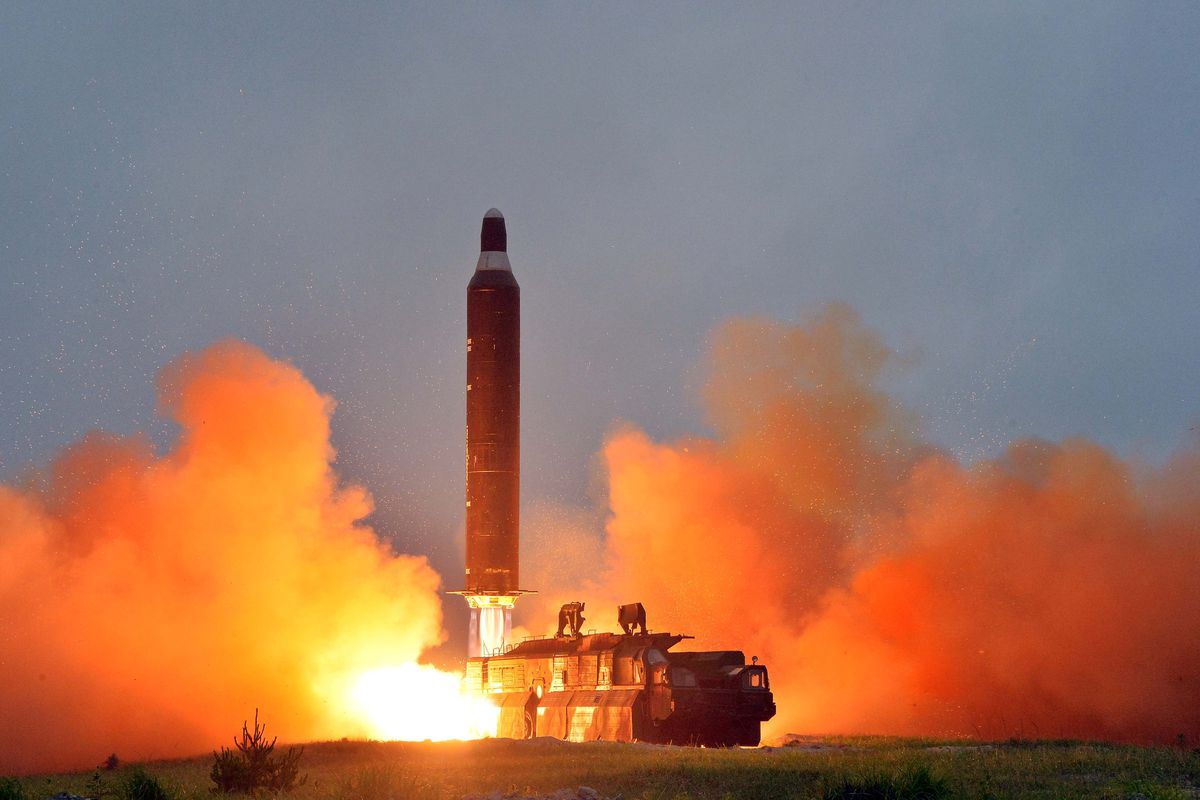 A photo released by the North Korean government on June 23, 2016, shows an apparently successful launch of North Korea’s Musudan missile. The Musudan had an overall failure rate of 88 percent, much higher than the 13 percent failure rate of the Soviet-era missile on which it was based. (Korean Central News Agency, via The New York Times)

A photo released by the North Korean government on June 23, 2016, shows an apparently successful launch of North Korea’s Musudan missile. The Musudan had an overall failure rate of 88 percent, much higher than the 13 percent failure rate of the Soviet-era missile on which it was based. (Korean Central News Agency, via The New York Times)

WASHINGTON — Recent missile tests by North Korea raise the urgency of what some Alaskans may wonder: Could the world's most unpredictable rogue leader land a missile in Alaska? Would he?

Maybe yes, surely possible in the near future, experts answered. But it's highly unlikely that Anchorage would be the despot's preferred target. Alaska's location – far closer to North Korea than the Lower 48 – instead puts it on the first line of defense against a missile strike launched at the United States.

Last week, North Korea fired four ballistic missiles into the sea off Japan's northwest coast. It was the latest episode involving a missile program that has increased dramatically in recent years, particularly since Kim Jong Un took over for his father, Kim Jong Il, who died in December 2011.

The shortest distance from North Korea to the outstretches of Alaska is about 3,000 miles – closer than Anchorage is to Washington, D.C. That is just a bit farther than the reach of the Musudan missile, which North Korea tested eight times in 2016. Other, longer-range missiles have been part of the country's planning efforts.

Experts say that North Korea could be able to reach the contiguous U.S. with a nuclear-tipped missile lobbed over the North Pole in about a decade. Its reach to Alaska will come sooner.

Alaska and the Lower 48 will be "in range" of a North Korean missile "very soon, if not now," said Alaska Sen. Dan Sullivan in an interview recently. And at some point, "all of those ranges would include a nuclear warhead on top of the missile."

As for whether North Korea could hit Alaska or Chicago with one of its missiles, and add a nuclear element, "it's not if, but when," Sullivan said.

But Alaska doesn't face much risk of an attack from North Korea, Sullivan said: "I haven't seen any evidence of that. The risk to Alaska is simply the flight path of any intercontinental ballistic missile coming our way would come through our air space first."

But as Kim makes progress in building his nuclear and missile launch program, Alaska will be the first stretch of the U.S. under threat only "by pure geography and trajectory," he said.

Sullivan attended a highly classified briefing on the issue two weeks ago, he said. Top Department of Defense officials and the vice chairman of the Joint Chiefs of Staff answered direct questions on Alaska's risk at the hands of North Korea, he said.

After two failed tests of a long-range "Taepodong" missile in 2012, the country switched to short-range ballistic missile tests and other types of missiles, with an ever-increasing number of tests, according to the Center for Strategic and International Studies.

And in 2016, North Korea completed two nuclear tests and launched 25 missiles, demonstrating steps toward crafting viable nuclear weapons. The country claims that it can attach a nuclear warhead to a ballistic missile, though the realities of the program are unclear to the general public.

Recent tests in North Korea demonstrated key new elements that could mean the country is able to launch missiles with an extended range. That helps North Korea "get closer to striking or having a capability to strike the United States of America," said Riki Ellison, founder of the Missile Defense Advocacy Alliance.

"I think North Korea has the capability to deliver nuclear missiles on Japan, (South) Korea, Guam — so they have capability today for those ranges. I think within the next year or two, they're very close to be able to show that capability all the way out to the United States," Ellison said.

Some experts believe "that they have capability … (to) strike Hawaii and some of those outskirts in Alaska on this," Ellison said.

But Ellison said he expects that North Korea would prefer to go after major cities in the Lower 48 rather than land a missile in Alaska.

Others argue that it could be much longer. John Shilling, an aerospace engineer who writes for 38north.org, a North Korea-watcher website, questioned the real abilities of North Korea's arsenal. The Musudan could only make it to Guam, but it "barely works, exploding in seven out of eight tests so far," he said. Others, the "KN-08" and the "KN-14," have not been tested – only paraded as mock-ups. That threat, he said, is years out.

But Sullivan said that the increasing capabilities of North Korea amount to a "pretty scary prospect."

Sullivan has a clear interest in ramping up missile-defense spending in Alaska and has lobbied in favor of programs aimed at making sure the state's resources could stop an incoming attack from North Korea.

Thomas Karako, director of the Missile Defense Project at the Center for Strategic and International Studies, pointed to the "Taepodong" missile tests that North Korea has done in recent years.

"It's not the optimal configuration for a missile," he said, but added, "it's real enough."

And it's the Musudan tests that give many pause, Karako said, because it is a better vehicle for a nuclear warhead. Nothing tested so far could reach the continental United States, "but these things could be staged and they could be combined in different ways."

"And so I think the concern that has kind of been there in a latent way for 20 years is beginning to increase and grow," Karako said.

"And even a guy who's unstable like Kim Jong Un would have to look at that, going, 'Wow, I can launch one or two or three, they're not going to have any impact, and then I'm going to be gone,'" he said.

Having strong missile-defense options can give "whoever is going to be in the White House time to think through options, when there's going to be a lot of pressure on him or her, and it can give the American people comfort," he said.

President Donald Trump has expressed an interest in going beyond that — adding nuclear weapons to the U.S. fleet and engaging in an "arms race" with Russia and China.

In response to the latest launch of four ballistic missiles on March 6, the U.S. said it had begun the deployment of an antimissile system in South Korea, known as the Terminal High Altitude Area Defense ("Thaad") system. And on Tuesday, Commerce Secretary Wilbur Ross announced $1.6 billion in civil and criminal penalties for a Chinese company that allegedly illegally shipped telecommunications equipment to Iran and North Korea. The company allegedly sent routers, microprocessors and servers to North Korea. 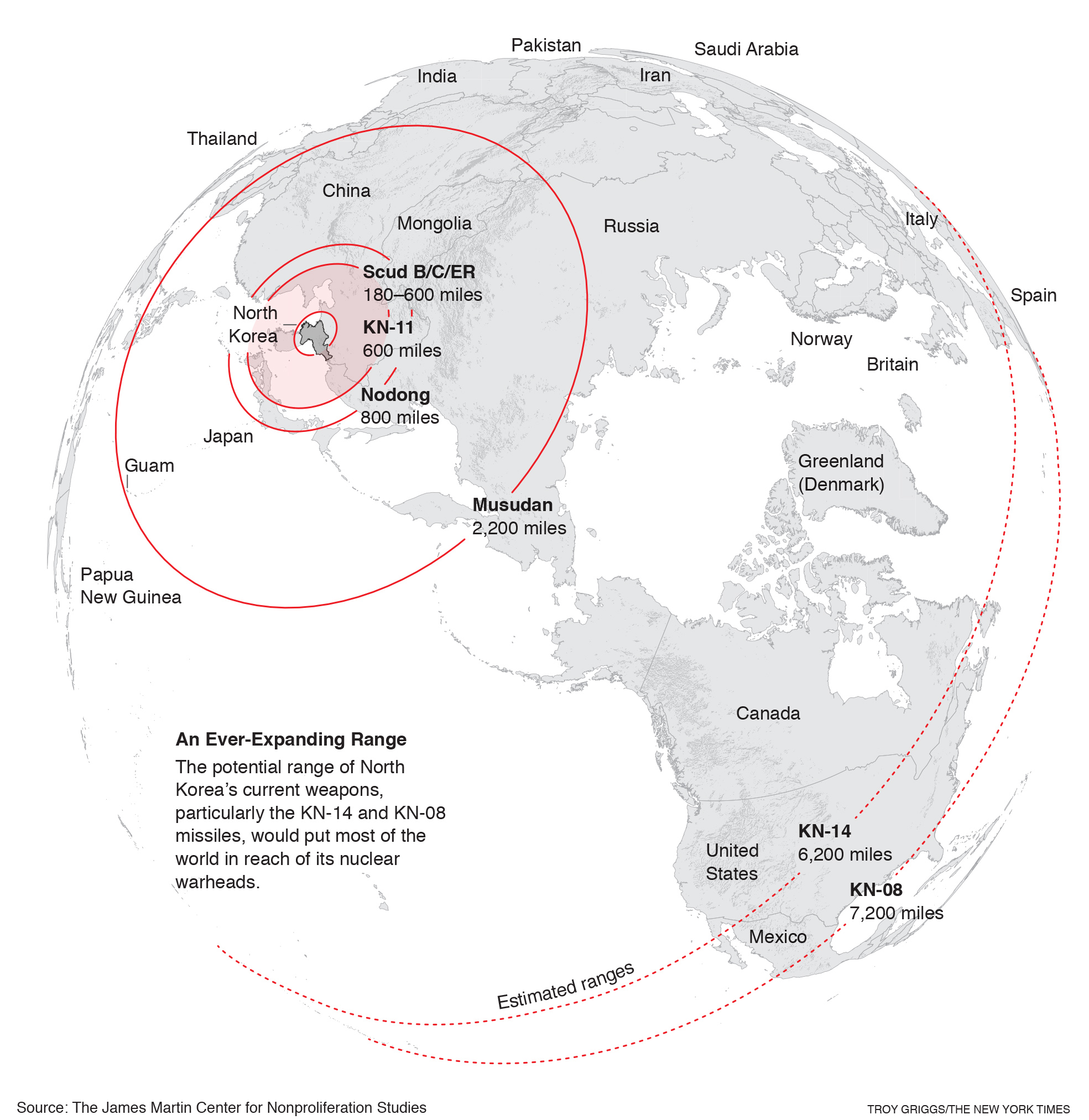 Sullivan and his allies argue that ramping up the missile defense program is the best way to protect the United States, for now. But the program has many critics for both its costs and its results. The United States has worked for decades, with allies, to reduce nuclear weapons stockpiles around the world.

Missile defense is not part of the diplomatic negotiations among the nine countries that already have nuclear weapons arsenals. There are just too many nuclear warheads to make shooting them out of the sky an option.