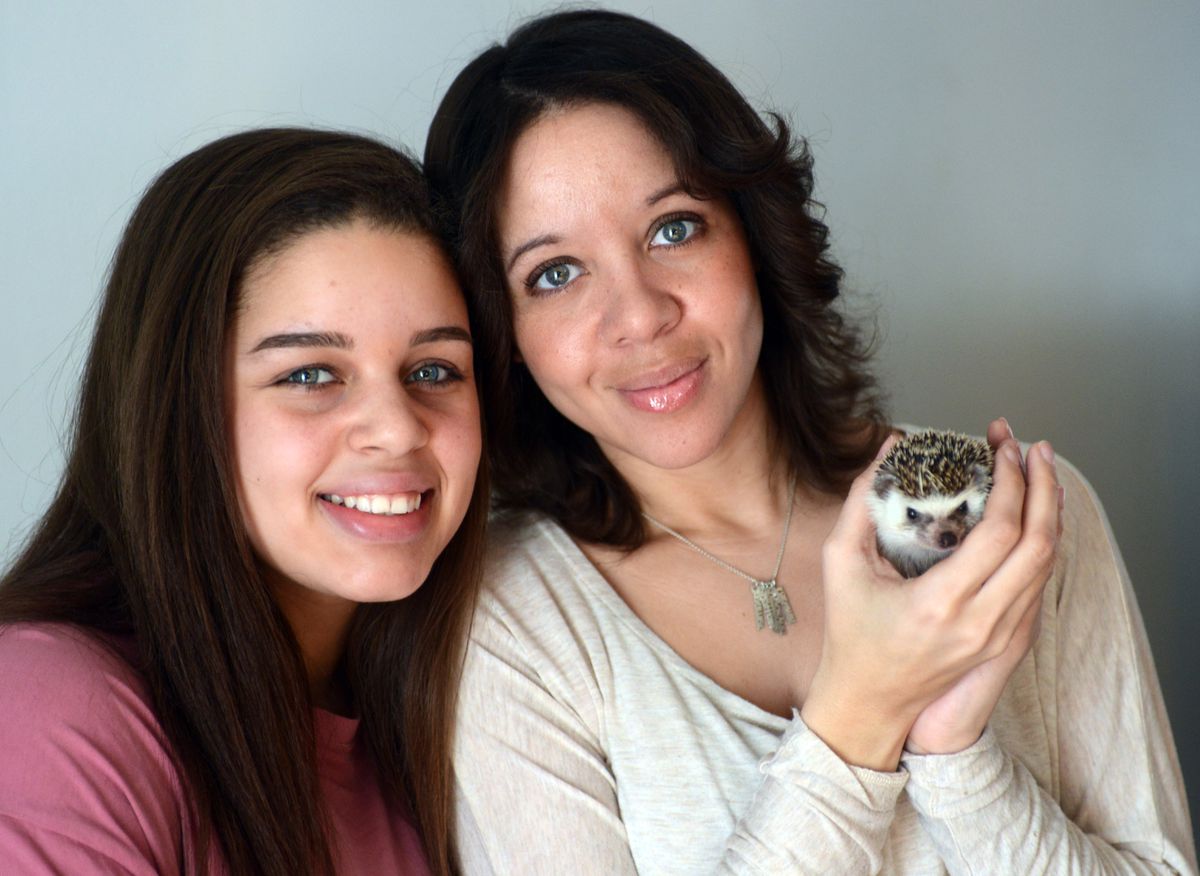 Tatumn Willis, 16, and mom Meagan Kowatch are happy to be reunited with Beckham the hedgehog after an escape and peculiar recovery. (Erik Hill / Alaska Dispatch News)

Tatumn Willis, 16, and mom Meagan Kowatch are happy to be reunited with Beckham the hedgehog after an escape and peculiar recovery. (Erik Hill / Alaska Dispatch News)

"FOUND HEDGEHOG," read the cardboard sign, duct-taped to a light-pole in East Anchorage.

Meagan Kowatch couldn't believe it. Her daughter's pet hedgehog, Beckham, had vanished from a pen in the front yard two months before. Did someone find him?

Whoever made the sign had taken the hedgehog to the pound, otherwise known as the Anchorage Animal Care and Control Center. Hurry, the sign-maker wrote. The hedgehog could be given a new home in three days.

When the shelter opened the next morning, Kowatch was there. But the hedgehog was not.

Someone had already claimed it, Kowatch was told.

But in fact, this was a case of hedgehognapping — a mystery that unraveled over about 36 hours in late October thanks to shelter supervisors, and an investigation by the city ombudsman's office, that is just now becoming public.

Tatumn is allergic to most animals — she's on nine allergy medications — but wanted a pet. Hedgehogs don't have much fur. Tatumn has always liked them. For a fourth-grade art project, she molded a hedgehog out of Play-Doh with toothpick spikes.

Hedgehogs are cute, spiny and hard to come by in Alaska. Beckham came from Oregon. His first owner, Tatumn's sister's teacher, paid $250 in shipping, plus another $350 in fees to the breeder, Kowatch said.

Tatumn baby-sat for the teacher for free for 33 hours last spring to cover the costs and got the hedgehog.

Tatumn had owned Beckham for only a few months when, on a day in August, Kowatch, her mom, was hedgehog-sitting in a pen in the front yard. One of Kowatch's daughters called to her from the backyard, and she briefly walked away.

When Kowatch came back, Beckham was gone. The rascal had pushed his way out of his pen.

The family looked for hours. They knocked on doors. They hung "missing" signs and dug through cow parsley, wild plants that could hide him.

Kowatch cried. Her six daughters — Tatumn, 16; Breckynn, 14; Dreamer, 13; Harmony, 11; Legend, 9; and Sparrow, 7 — are important to her. She has their initials tattooed along her wrist and wears a silver necklace with their names.

"I'm the adult, and I lost the damn thing," Kowatch said.

Hedgehogs are nocturnal, and for weeks, Kowatch awoke at 3 or 4 in the morning to search for Beckham. The family worried he'd been killed by an eagle.

Kowatch started researching ways to get a new hedgehog or pay her daughter back. But that would cost hundreds of dollars.

The family lives in a close-knit East Anchorage neighborhood. Early in the morning in late October, one of their neighbors, a retired cop, was driving down the street when he saw the "FOUND HEDGEHOG" sign.

Kowatch ran out in her pajamas to look for herself. She saw, with trepidation, that she had only a few days to claim the hedgehog from the shelter.

When she got to the shelter, she was told: No hedgehog here. A customer service agent said the shelter had a hedgehog two days before, but someone came to claim him.

Kowatch sat in the lobby and called around to other agencies. After she went home, she discovered the hedgehog given away by the shelter was found on a street very near her house. She called the shelter back.

"You're telling me there's two hedgehogs in Anchorage, Alaska, six houses away from each other?" Kowatch asked.

"Everything you're telling me isn't going to help get your hedgehog back," Kowatch remembered the agent telling her.

Kowatch contacted shelter administrators and the office of the city ombudsman, who investigates complaints against municipal agencies. It seemed like the found hedgehog was given away too soon.

Hours later, Thomas heard from the shelter on Facebook. A hedgehog had just turned up in the overnight drop box. Kowatch rushed to the shelter. An employee showed her in, and she scooped the hedgehog out of a cage.

The hedgehog was in a tight ball, but he uncurled in her hands, Kowatch said. It was definitely Beckham.

As described as a small item in the ombudsman's annual report, released this month, this is what happened:

As it turned out, a shelter employee broke policy about returning animals to owners, said Laura Atwood, a spokesperson for Animal Care & Control. That hasn't happened in at least 16 years, Atwood said.

The employee is no longer working at the shelter, she said.

City ombudsman Darrel Hess said the hedgehog was released to someone the employee knew. Proof of ownership usually consists of microchips, photos or medical records. None of that happened in this case, he said.

"It seems humorous, but you know, I know how I'd feel if Piggy got loose and an hour later they gave her to somebody," Hess said. Piggy is his beloved English bulldog.

Hess, whose office is more used to complaints about improper tows, bus access or property assessments, added: "People frequently come and they make some allegation that sounds bizarre or strange … 'oh yeah, somebody stole a hedgehog.' But it turned out to be true!"

Kowatch could prove ownership. She had photos of Beckham that showed a distinctive white scar on his nose.

Tatumn and her sisters were overjoyed when Beckham came home. He's the size of a softball and the shape of a spiky pincushion. He weighs less than 1 pound.

Hold up a hand in front of Beckham's face, and the hedgehog scrunches its spiky brow. Kowatch calls it the "frowny face."

Beckham gets his head stuck in toilet paper rolls. He loves cardboard Pop Tart boxes. He eats cat treats and worms. Tatumn posts videos on her Instagram feed. He makes frequent "show and tell appearances" in the younger girls' classrooms.